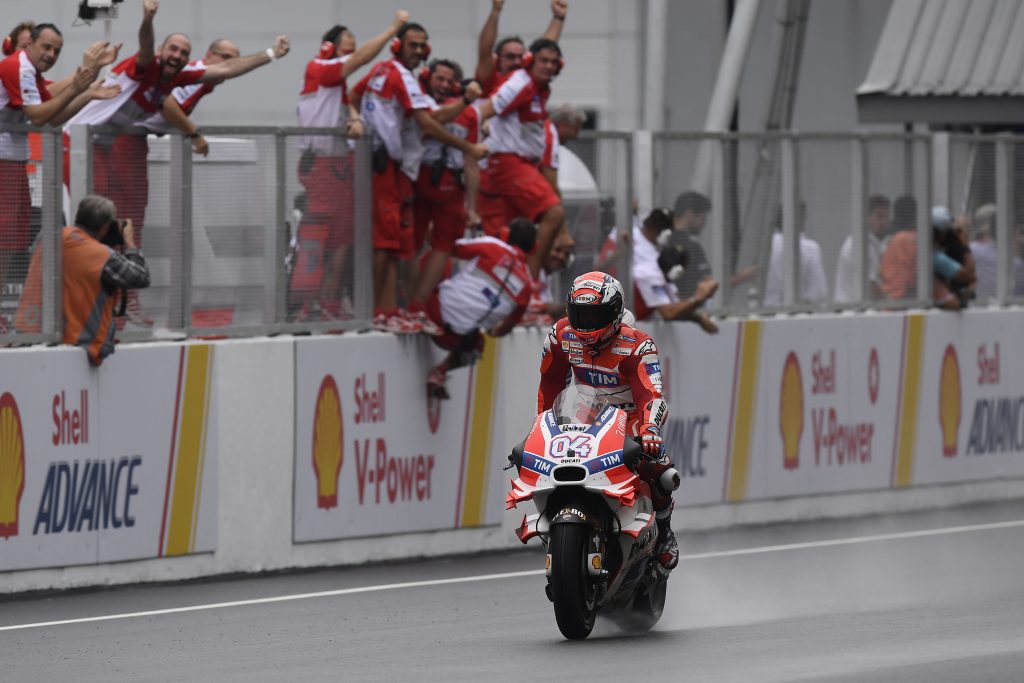 Sepang, Malaysia – Andrea Dovizioso took first place in the Shell Malaysia MotoGP after a thrilling win that saw Ducati and Shell add to the success they have achieved together in partnership in the premier category of the sport since 2003.

After the race, Dovizioso, from Forli, Italy, spoke of the benefit the team has experienced thanks to their close collaboration with Shell across the season, which contributed to the Bologna-based manufacturer having already picked up its first win for six years at the Austrian Grand Prix in August.

“The work Ducati does with Shell is of importance to the success we are able to achieve on track. Our engines could not run without the products they supply the team and this latest victory is proof of what we can achieve when we work with strong and experienced partners. I look forward to continuing this success in the races ahead.”  – Andrea Dovizioso, Ducati Team Rider 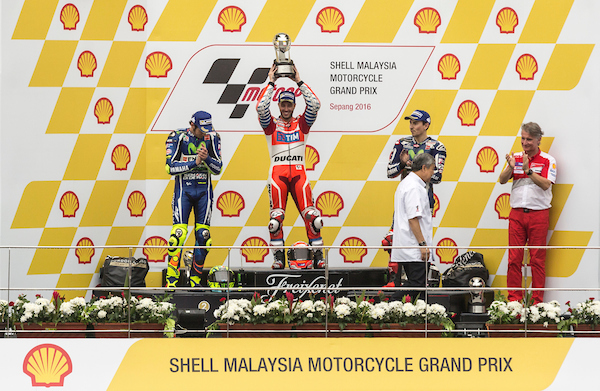 “Shell is continually developing Shell Advance Ultra with PurePlus Technology race lubricant and Shell V-Power race fuel to deliver power and performance to Ducati on track – a fact borne out by this latest triumph. This is proof of the value that can come from close collaboration with our Technical Partners, from which we are also able to develop the road-going products we offer customers around the world.” – Guy Lovett, Shell Motorsport Innovation Manager

“We place great trust in Shell to develop fuels and lubricants that deliver performance on track. This is built on its exceptional ability to supply product upgrades and performance gains throughout the course of a season, which has helped propel the team to victory again in 2016.” – Luigi Dall’Igna, Ducati Corse General Manager

Shell’s Technical Partnership with Ducati Corse began in 1999 when Shell supported Ducati in the Superbike World Championship. In 2003, the multiple title-winning collaboration began contesting in the MotoGP World Championship together. The partnership has since gone on to become one of the strongest and most successful within the motorcycle world, having collected six World Superbike Riders’ Titles and nine Manufacturers’ Titles, along with a clean sweep of the MotoGP Riders’, Teams’ and Constructors’ World Championship titles in 2007.

In 2013, Shell extended its Technical Partnership to include Pramac Racing. This followed the announcement that the Pramac squad would become an official Ducati factory-supported team.

Shell’s involvement in premier class motorcycle racing has helped develop the Shell Advance oil and Shell V-Power fuel for the road, so that bikers all over the world can benefit from the cutting-edge technology developed on the track. In fact, Ducati also chooses Shell Advance oils and Shell V-Power fuel as the first fill for every Ducati leaving the factory in Bologna, Italy.

This transfer of knowledge gained from the track to Shell’s products for the road, is central to the Technical Partnership with Ducati, as MotoGP provides the most extreme test bed for Shell’s products.

Scientists from Shell’s Technology Center in Hamburg, Germany, regularly visit the Ducati factory in Bologna and are closely engaged with Ducati engineers to ensure that the Shell Advance race oils and Shell V-Power race fuels are optimized to power and protect the Ducati engines in MotoGP. A rigorous testing program runs all year round, with samples from the races analyzed back at the Shell laboratories to ensure constant development and performance. The fuels and oils developed must not only meet the sporting regulations, but match the exacting requirements of the Ducati MotoGP Team itself.

Ducati Corse and its Technical Partner, Shell, undertake extensive and rigorous testing of the bespoke Shell Advance formulations to gain a detailed understanding of the Desmosedici GP engine’s frictional characteristics and lubrication requirements.  This enables the companies to develop the hardware and oil in order to achieve maximum benefit – unlocking valuable performance while maintaining durability.

Alongside the continued demands for greater power and performance, increased fuel economy has become a major requirement within MotoGP. Shell works with Ducati and employs a wide range of testing techniques to understand the fueling demands and combustion characteristics of the Desmosedici engine and strives for the optimum balance between power and fuel economy.