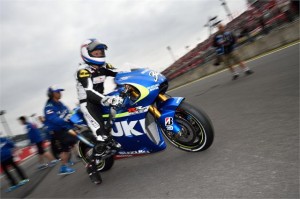 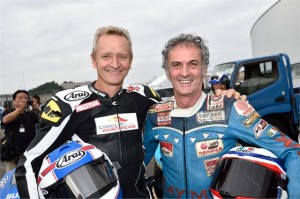 The 2015 Suzuki MotoGP GSX-RR was unveiled at  Motegi MotoGP race in Japan on Oct 12 as 1993 World 500cc GP Champion Kevin Schwantz was joined by 1982 World Champion Franco Uncini for demonstration laps at the Twin Ring circuit.

Schwantz, who joined the Suzuki MotoGP test team for its test at Austin in Texas, USA earlier this year, rode the GSX-RR while Uncini demonstrated the GSV-R that last competed in the 2011 MotoGP series.

Kevin Schwantz: “I started very carefully as we didn’t start from pit-lane and without tyre warmers, but I soon felt the machine was being very stable and I was able to speed-up. I understand the bike, it’s a very good machine; and I really enjoyed riding it.”

Franco Uncini:“Fantastic! It’s a very great bike. Kevin followed me early on, but then overtook me at great speed. After that I ran behind him and it was really enjoyable. I would like to say thank you to the Suzuki team staff giving me such the chance like this.”