Suzuki’s latest-generation automatic motorcycle brings fresh styling and excitement to the burgeoning local scooter market. With every major manufacturer offering automatic models, the new Skydrive 125 is another fresh choice for the local consumers and strengthens Suzuki’s position in the local market. 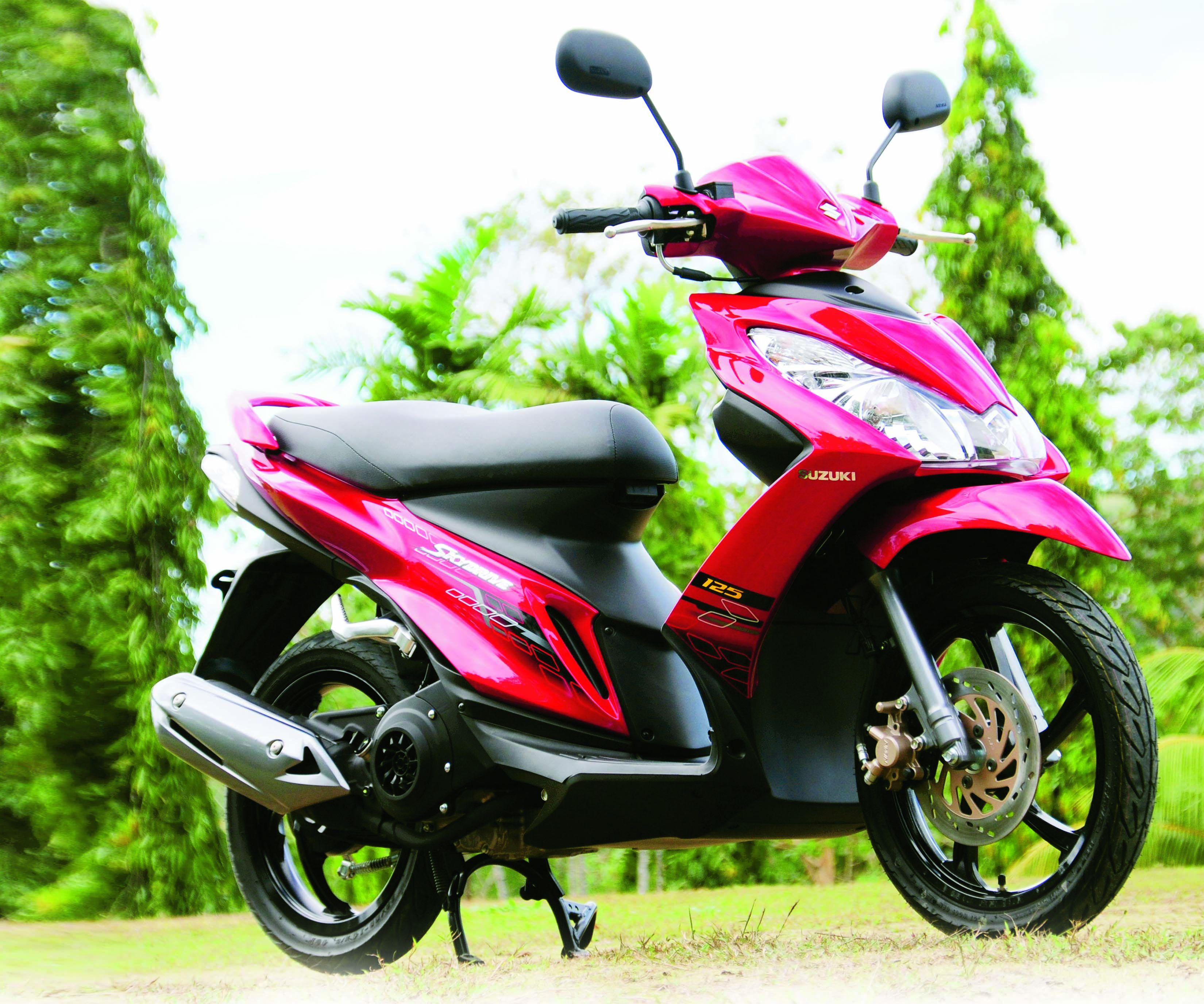 Suzuki Philippines was the first Japanese brand to offer affordable automatic motorcycles in the Philippines after Yamaha. They saw this emerging trend early and decided to take a dip in this market segment. They initially launched the entry level Step 125 in 2006 followed a year later by a much bigger and classier Hayate 125. The Step was light and agile while the Hayate was stable and had more styling presence. Both models enjoyed Suzuki’s 125cc engine which offered a displacement advantage over its nearest competitor and proudly used the adage”Powerfully Automatic” to differentiate the two models form its competition. Both models received several upgrades like standard alloy wheels and new colors and graphics as well as minor technical improvements to keep both models fresh and competitive. The company also strengthened the performance image of its automatic range by developing a race version of the Step and racing it at both the grassroots and national levels. Suzuki won at both levels after only a few months. At the start of the 4th quarter of 2009, Suzuki released its third and latest automatic model, the new Skydrive 125 just in time for the Christmas season to the delight of the dealers. The model also made its high profile racing debut at the recently concluded IRGP3 in Carmona. 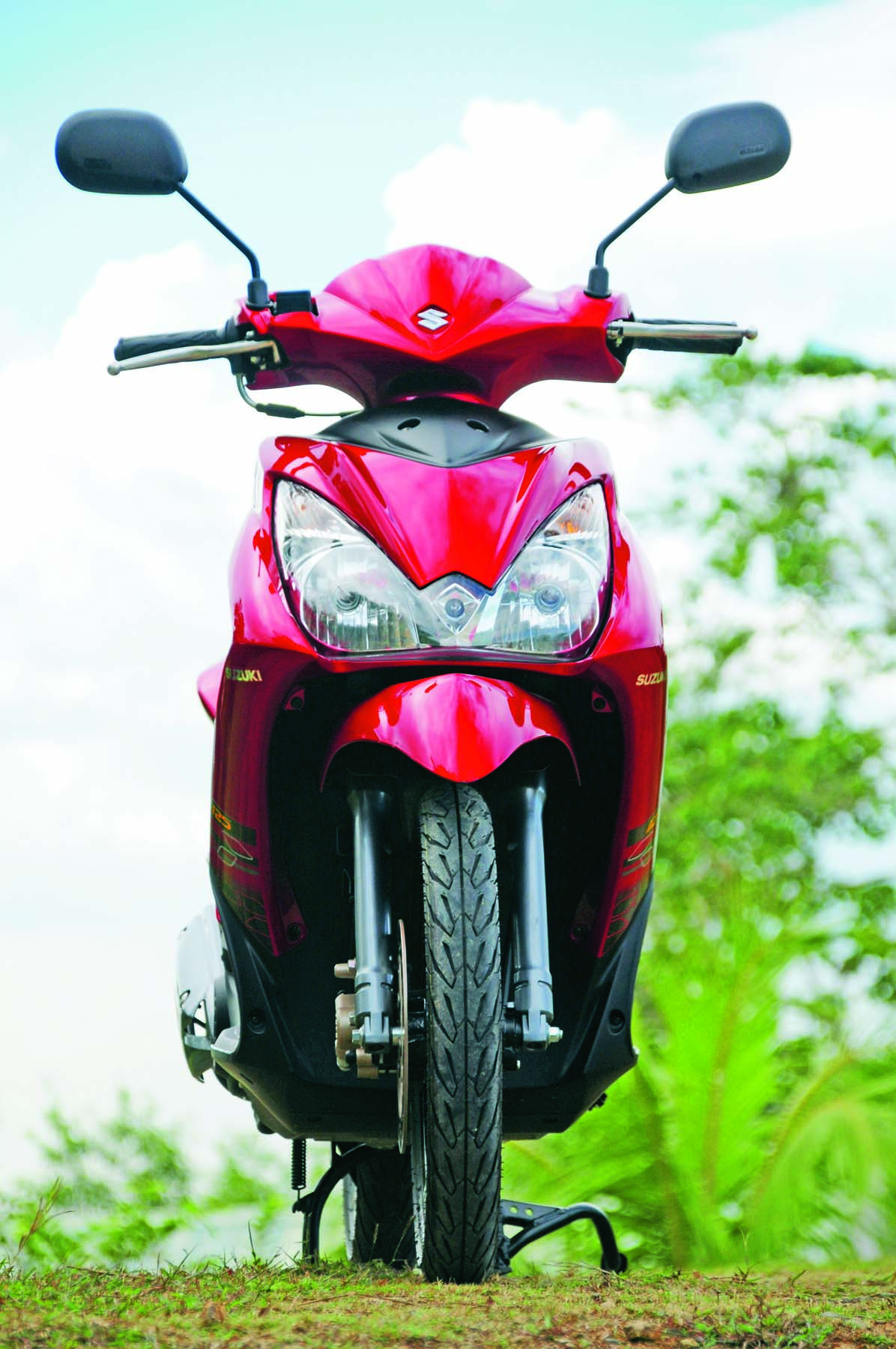 “It has more styling appeal and definitely has more physical presence.”

According to Suzuki, the Skydrive development team was influenced by strong Japanese traditions and values and focused on designing a scooter that would implement the most advanced technology features. The result was a concept bike that was aerodynamic, very agile, and comfortable with adjustable honeycomb-style seats. First exhibited at the 2008 Bangkok International Auto Show, the two SD concept models created a buzz with their revolutionary design. Public perception judged the SD prototypes as the first-ever Japanese scooters that managed to dethrone the Italian style. The SD-02 model also graced Suzuki’s pavilion during the 3rd IR Bikefest held last March 2009, hinting of the forthcoming launch of this model in the local market. 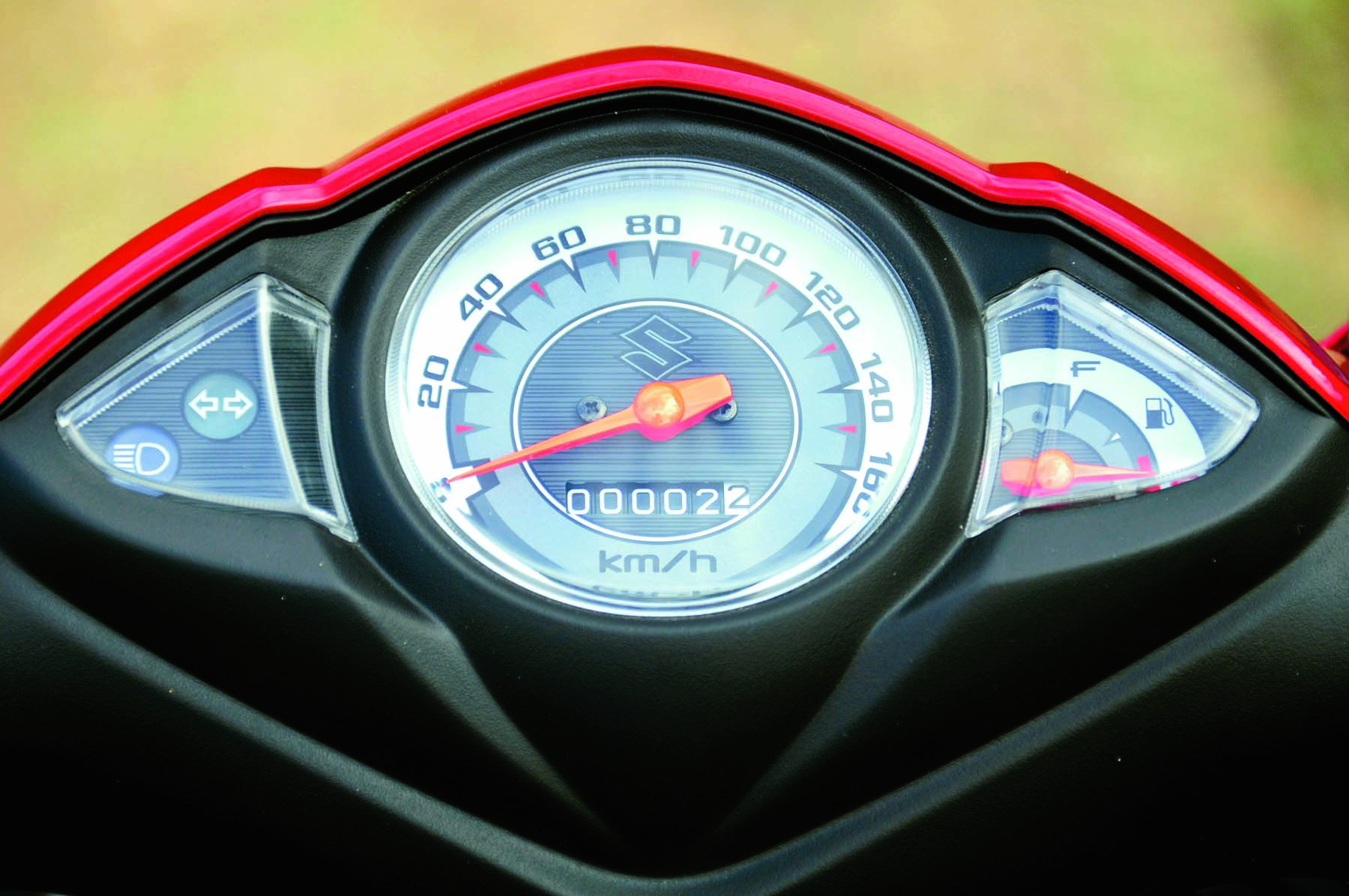 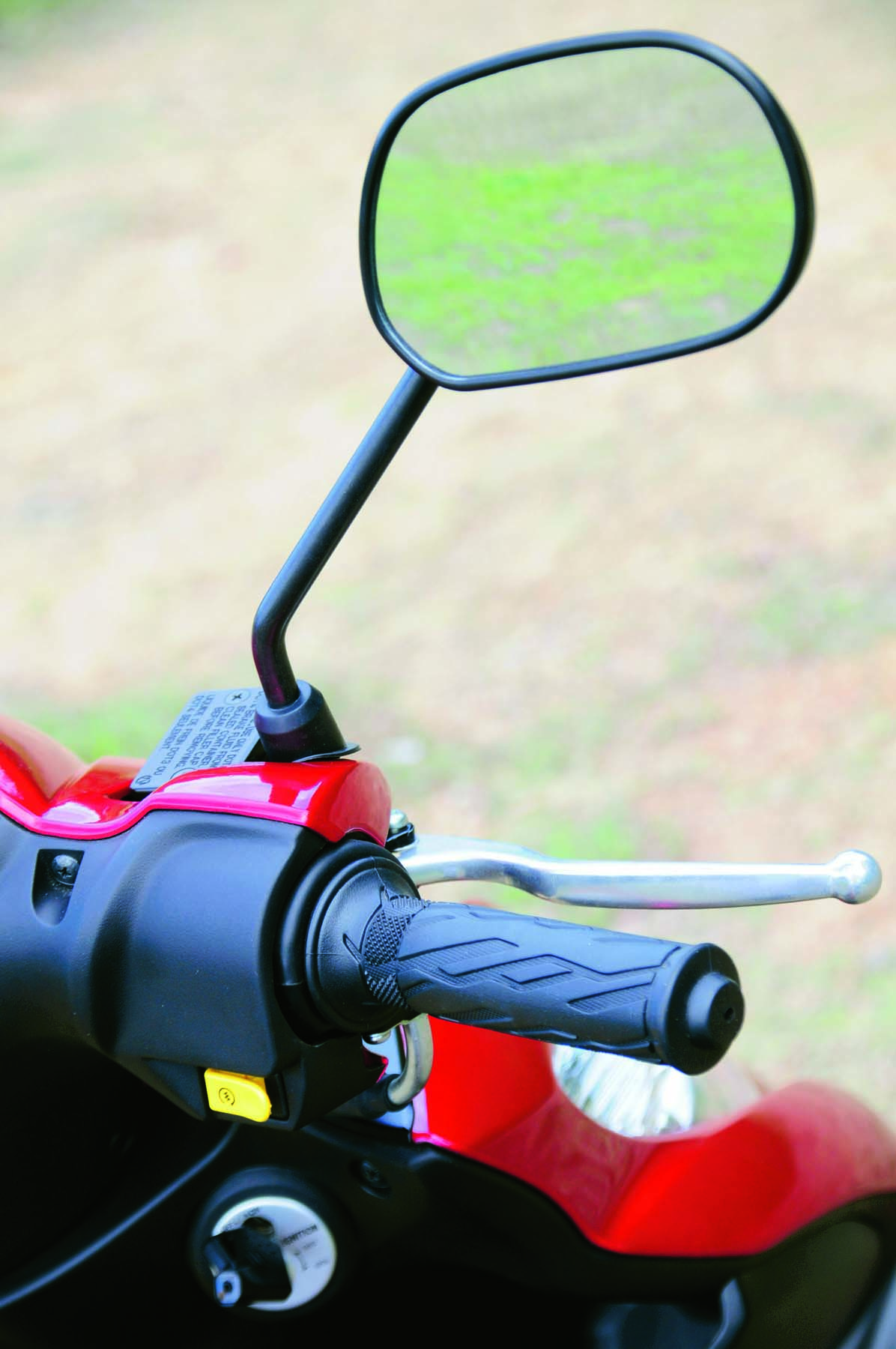 The new Suzuki Skydrive is equipped with a new 125cc 4-stroke, air-cooled, E10 gasoline compatible, SOHC engine that generates of 7.2 PS of power at 8000rpm. Its engine is packed with landmark technologies namely the state-of-the-art ultra-modern Engine Control Module (ECM), Suzuki Jet Cooling System (SJCS), and the patented Pulsed Secondary Air Injection (PAIR) System which assures optimal engine combustion. It is also built using SCEM technology (Suzuki Composite Electrochemical Material). All these engine features are designed to make the Suzuki Skydrive the leader in performance and fuel economy. Like all manufacturers selling in the local market, Suzuki has, for the meantime, refrained from introducing Electronic Fuel Injection (EFI) in the Skydrive as found in other markets like Malaysia and Thailand. And it was a very sensible decision considering the additional cost, technical training and dealer equipment investment needed to service EFI units. However, we believe EFI is only a couple of years away from being introduced in the Philippines as well to comply with environmental and fuel efficiency issues. 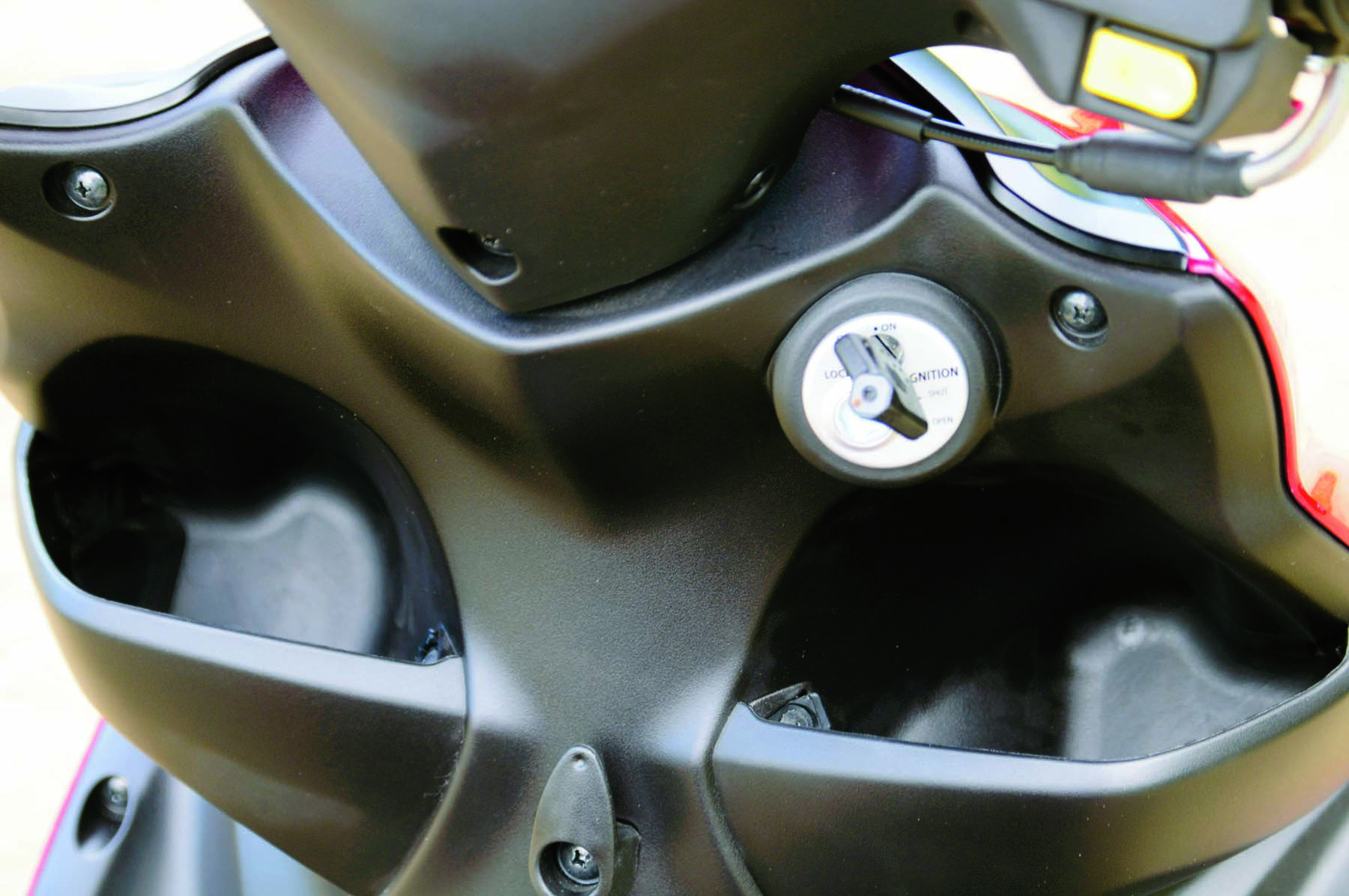 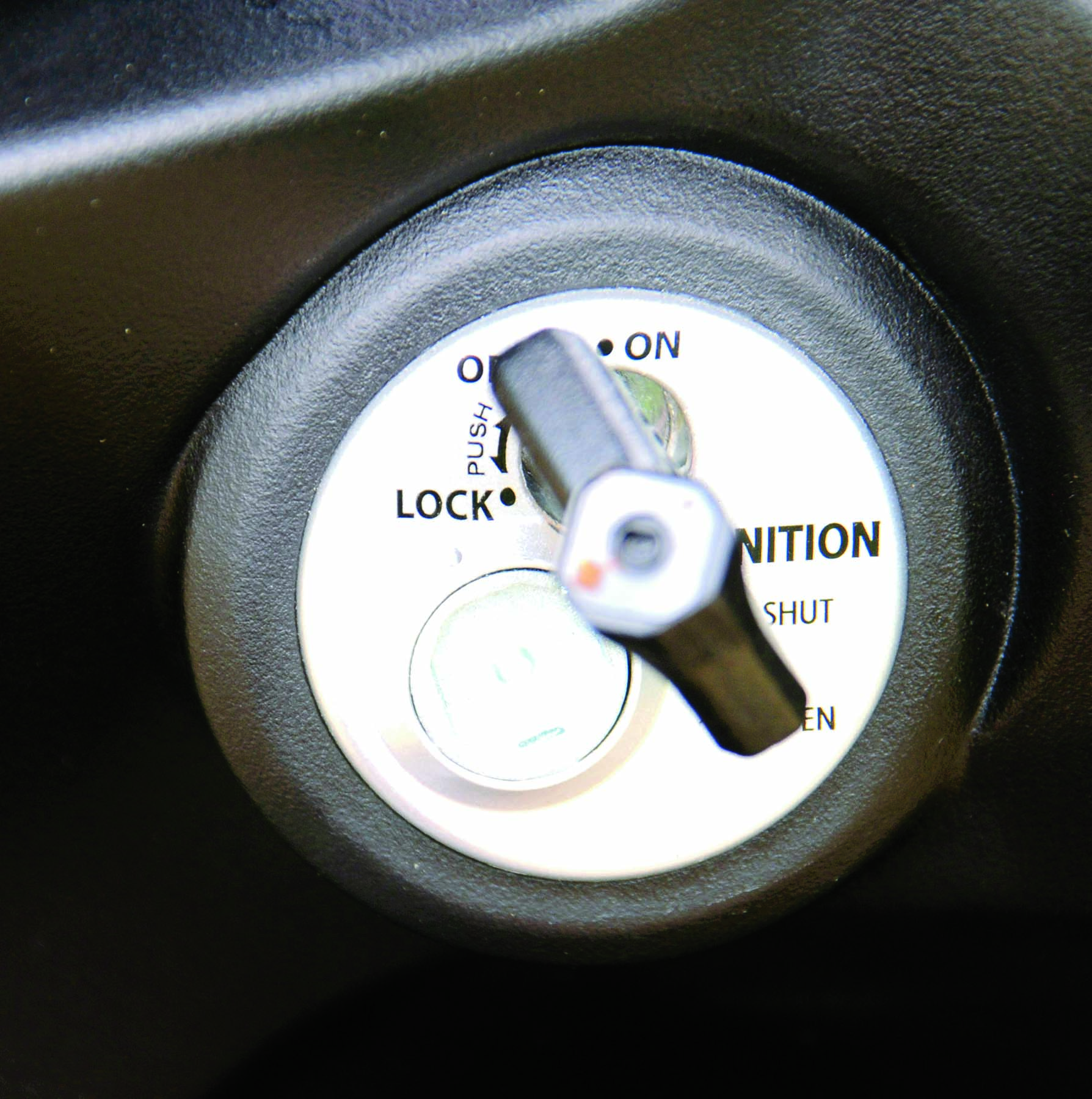 The most impressive step forward for this model has got to be its sophisticated, modern and yet aerodynamic styling. It has more styling appeal and definitely has more physical presence that the other two Suzuki automatics. Its wider bodywork is dominated by the attractive, sleek and modern multi-reflector twin headlamps. Its high-mounted and large front fender gives it a more aggressive look and contributes to its bigger presence. Its instrument panel is very sporty and the ever convenient flat floorboard gives this scooter the versatility that most scooter riders are looking for. Other nice new styling touches are the uniquely shaped die cast passenger foot pegs and the nicely shaped and finished muffler guard. It is definitely on of the new scooters in the market that will get noticed on the streets because of its looks. 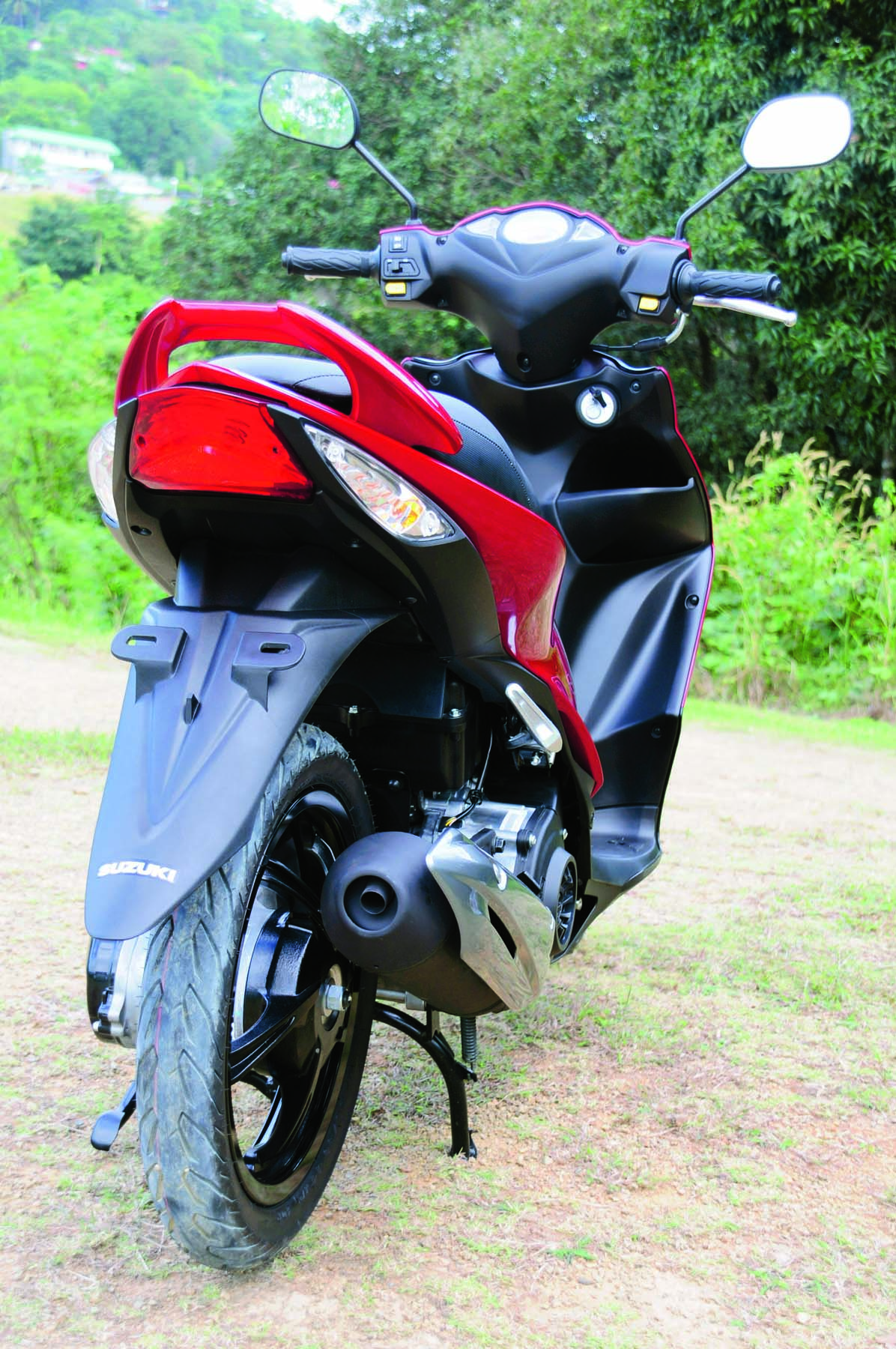 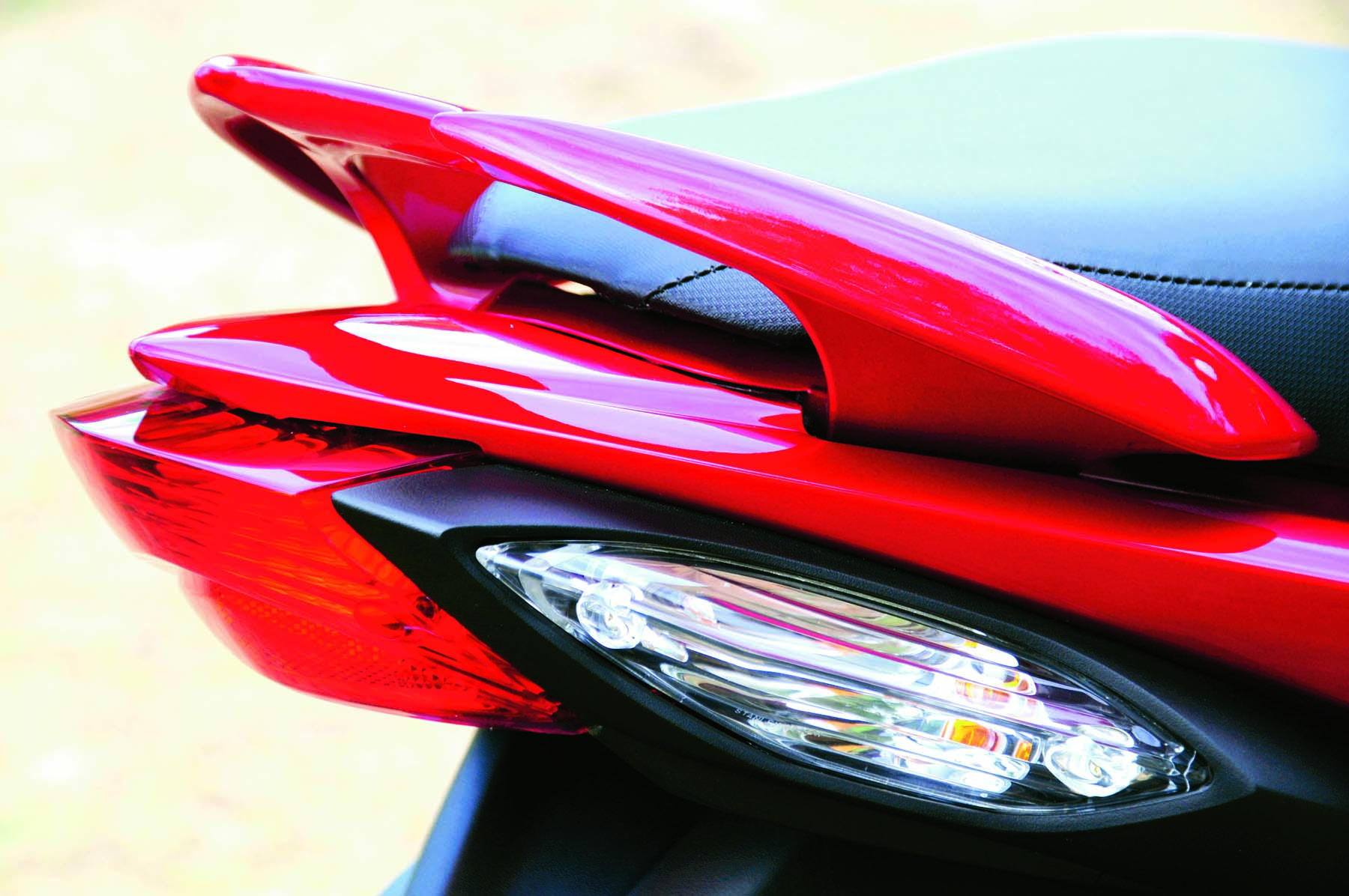 Performance wise, the Skydrive delivers smooth acceleration via its Super CVT (Continuously Variable Transmission) system. Smoothness if not outright top-end performance is the ace of the Skydrive. After more than three years in the ASEAN market, Suzuki’s system is now a proven quantity. The brake system consists of front hydraulic disc and rear drum brakes. It impressed us with its power and consistent feel. Repeated stop-and-go is a breeze while performance riding is confident inspiring. The suspension system features telescopic coil spring for the front and swing-arm type for the rear. They were able to handle the bumps on the road very well and supple enough to provide a relaxing and comfortable ride. Yet they are also compliant capable of taking corners hard. Our sporty test rider liked it very much and said it gives him more confidence together with the easy to modulate brakes. 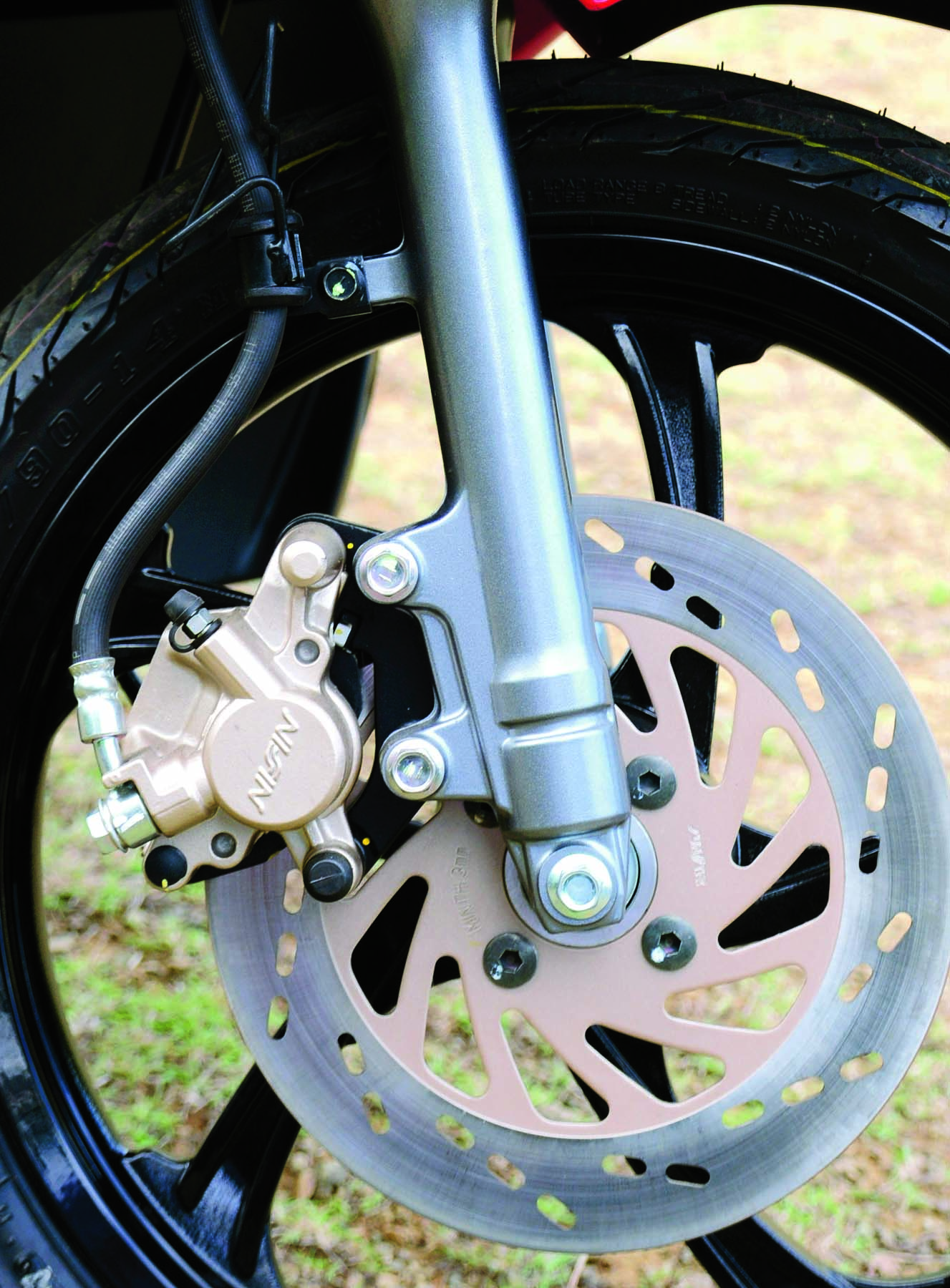 The Skydrive is also equipped with sporty black 14-inch alloy wheels similar to the Step125. Despite it being a larger scooter, it retains the agile handling of the smaller Step model. Interestingly, the Skydrive somehow also has the stability similar to the Hayate equipped with larger 16-inch wheels. Other interesting features includes a magnetic key shutter provides added security and peace of mind for public parking , while an underseat compartment provides storage for small personal items. Overall, the Skydrive is hard to pick-on, it seems that only minor things like the shallow underseat compartment and big airspace between the front wheel and the fender can be pointed out if we must. However, the versatility of the flat floor board more than makes up for the small storage capacity and the fender’s aggressive shape ties it up with the over-all styling of the bike. 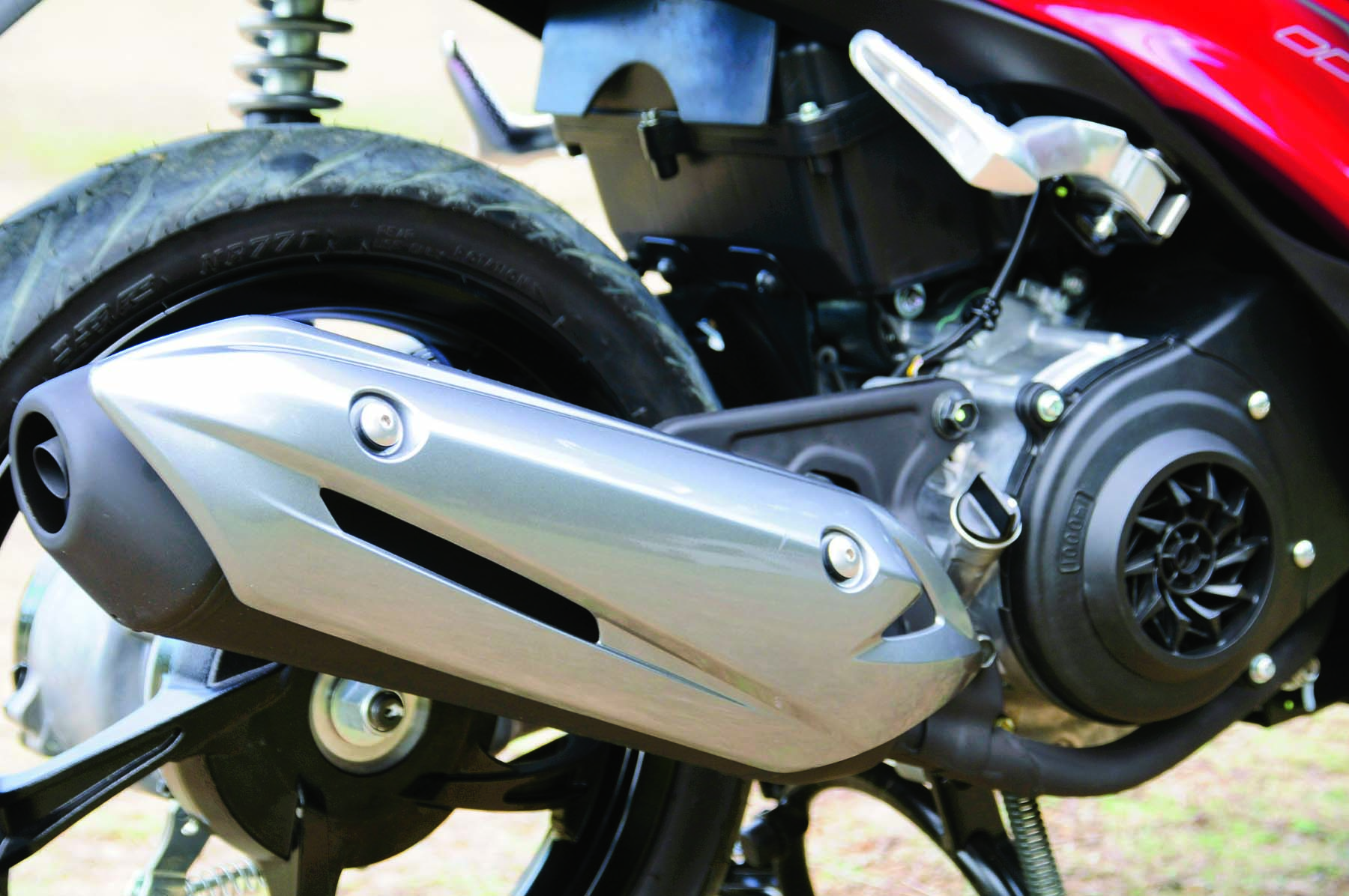 After seeing the SD-02 concept bike, we thought of how good-looking the actual production bike would eventually become. Nine months later and we were not disappointed. People will buy this new Skydrive from Suzuki will be rewarded with outstanding style, solid and smooth running performance as well as good fuel efficiency. It does not only look good, it also performs well! 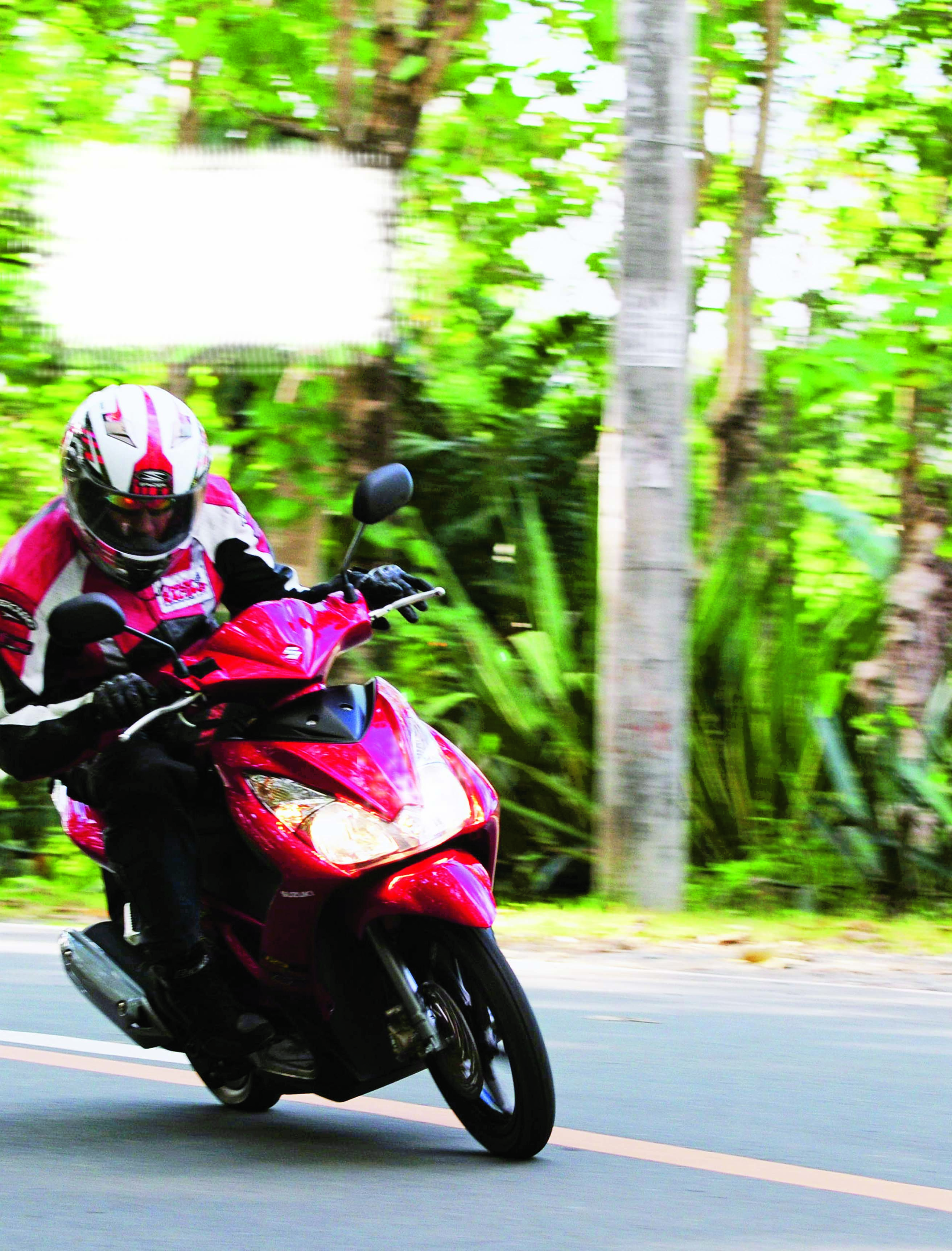 Ricci Abrina
“I will start with the suspension, which for me is very comfortable. The bumps I drove over were absorbed easily and the road was really bumpy! The brakes are pretty good and the standard tires for the Skydrive are sticky and on the curves, it’s reassuring to go turn in at bigger lean angles. The brakes can easily stop the scooter quickly and given the good suspension, it helps in riding the scooter faster. I like the design of the rear which is similar to the GSXR big bikes. I also like the very modern muffler design. The front of the scooter looks wider than the other scooters of it class. I like the way they did instrument gauges where there is segregation of each face or gauges so that they are easier to look at when you’re riding fast. I like the two pockets in front where we can put a lot of things and also the back ride pegs that look very modern and sturdy. The colors available for the Skydrive are also very nice.” 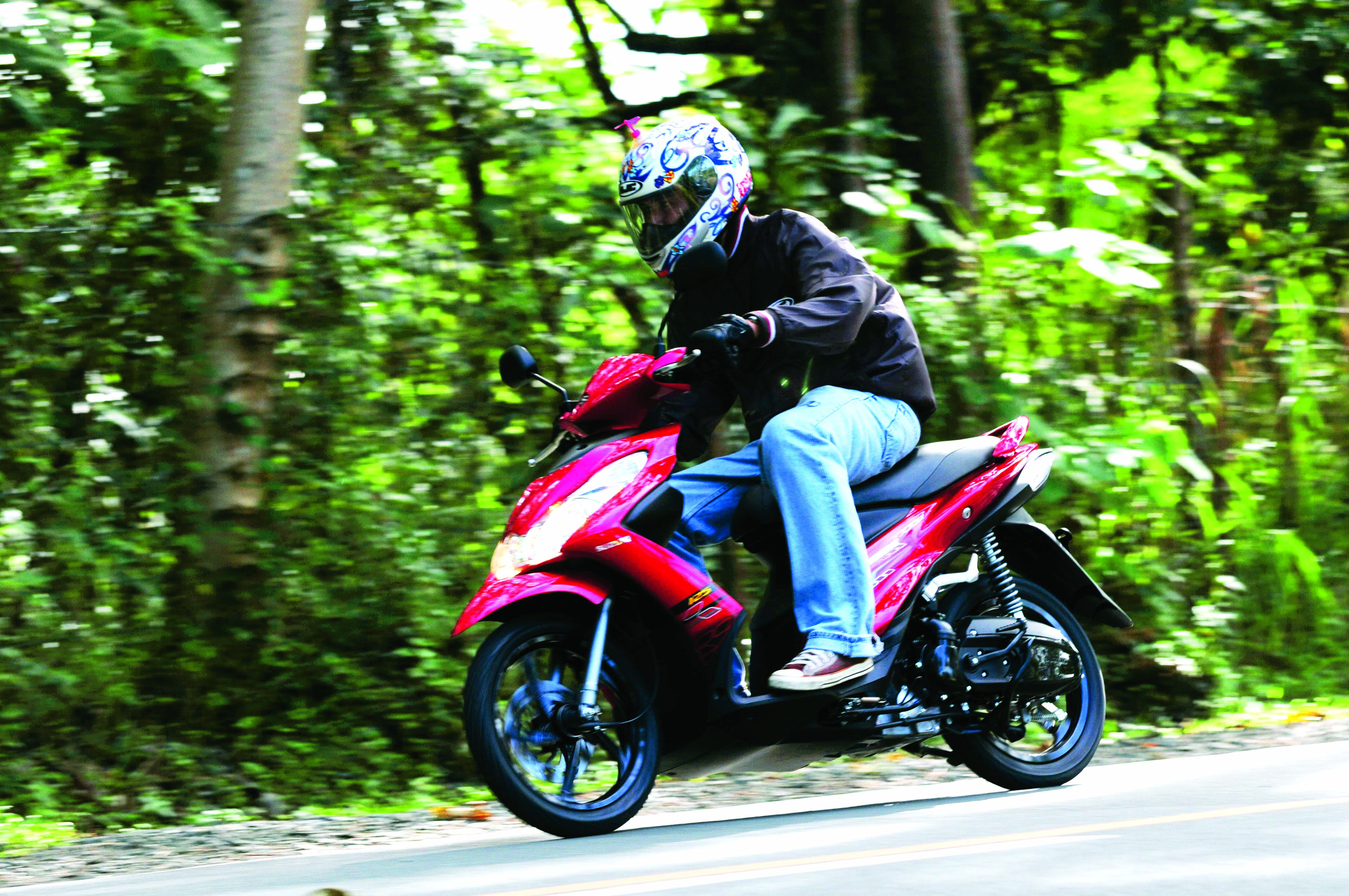 Philip Bonza
“The styling of the Skydrive is very futuristic I like the contour of each side and angle of this bike. From the front end, it looks like an owl, the headlights are the eyes, the park light is the nose and the front fender is the beak. The two-tone rear body panels are unique with the red and flat black combination. Every angle on each side matches the overall appearance of the bike. The candy red and black color combination of our test bike is very vibrant and perfect for my taste. And for the ride, the seating position is comfortable for my arms but my legs are a little awkward due to my height (maybe will not be relaxing for a long rides for me). The seat foam is medium soft so it’s a big help for bumpy rides. The front suspension is a little too small but the suspension travel is good and better for cornering. The rear suspension is okay; not too soft and not too hard. The brakes are perfect for its power. I like the engine power at low speeds, however, riding it at the high speed is a little disappointing. The engine vibration and noise is very low. So overall, this bike is a perfect for a city riding and a great ‘porma’ scoot. The color, the style, and the uniqueness of this Skydrive I can give these 3.5 out of 5 stars.” 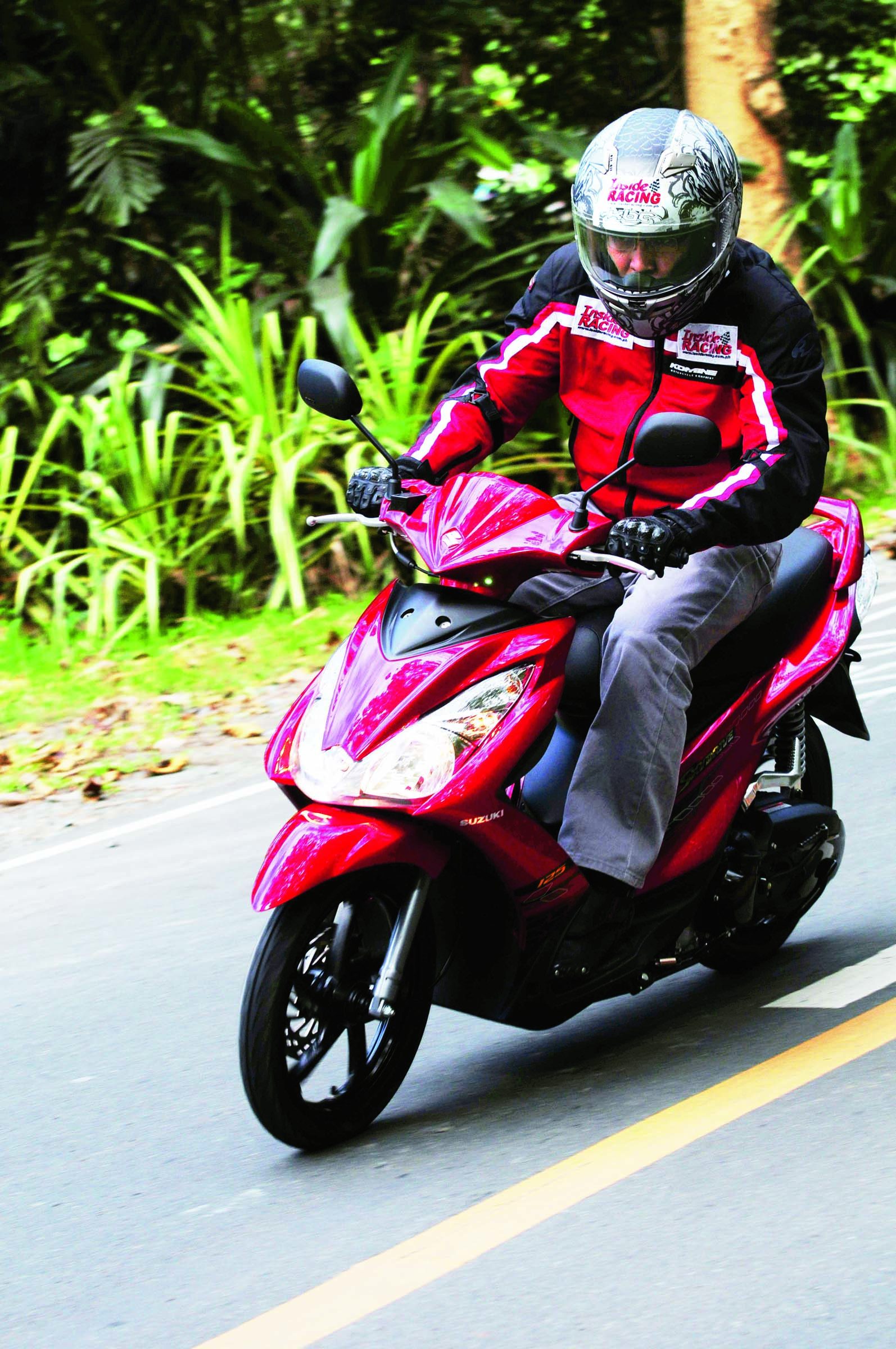 Al Camba
“The most striking feature of this model is its styling! It is very futuristic and sophisticated with many intersecting lines. I like its increased physical presence as well. It looks very dynamic and yet still elegant because of the attractive colors and simple graphics. I was impressed with the 125 engine’s smoothness. Although its top-end power is not dramatically higher than the competition, or even compared to the the Step or Hayate, its ability to accelerate and its refinement caught my attention. The brakes I also find excellent. It has good stopping power and feel and easily to modulate. I also find a marked improvement on the build level and material quality. Its handling is very light because of the 14-inch wheel but somehow it does not behave twitchy at high speeds as of it is equipped with 16-inch wheels. This is an easy bike to ride around town or cruise on the twisty country lanes. The underseat compartment is bit disappointing for it allows very slim items to be stored but the flat floorboard more than makes up for it if load carrying space is the issue.”

*This article was published in InsideRACING’s  Volume 7 Number 11 2009 issue. 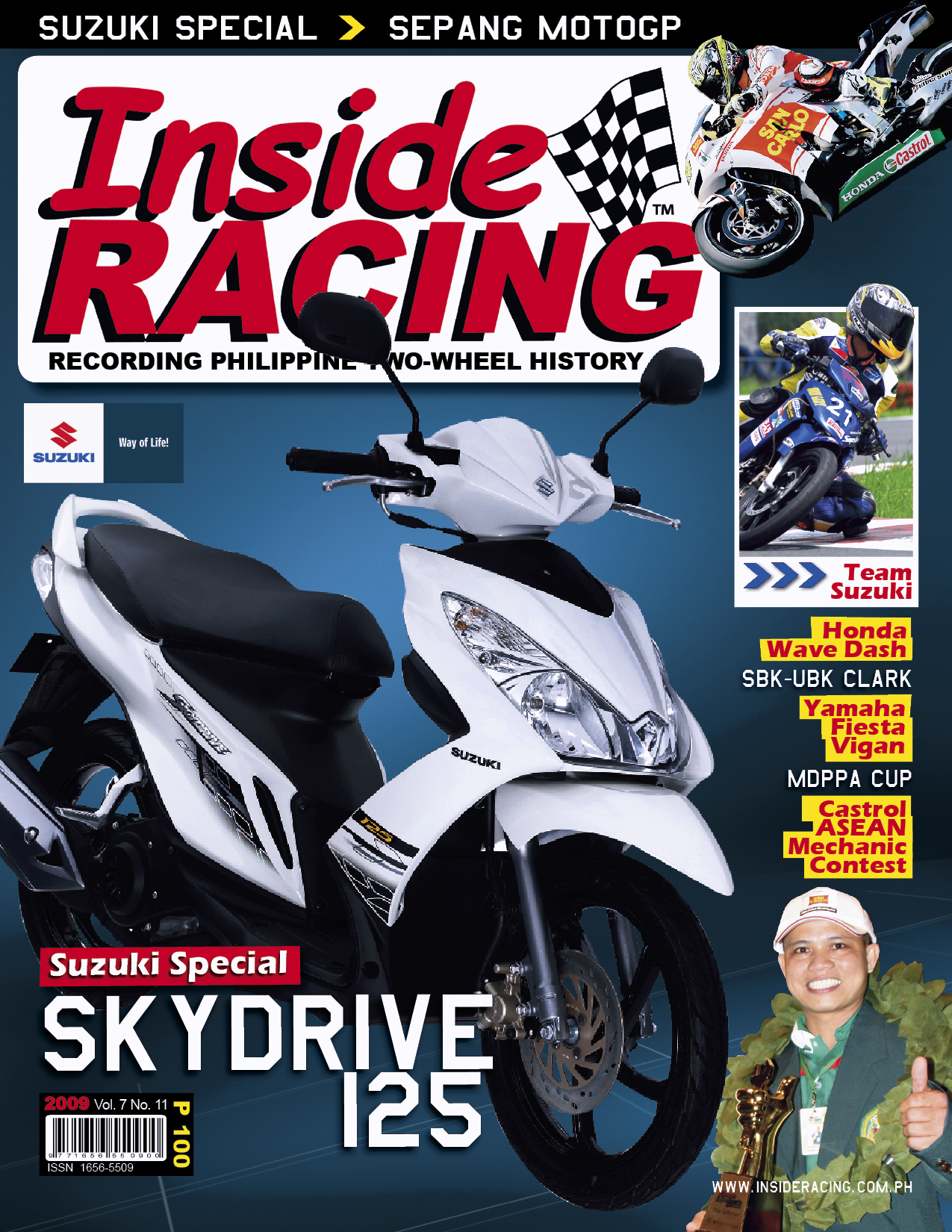