Experts would normally dismiss a new underbone model as just another facelift with a few slightly different plastic panels given a new technical description and glorified functionality. But not the new Suzuki Smash. Aside from its new super cool looks, it also handles like a dream and is packed with a new, powerful and smooth engine! 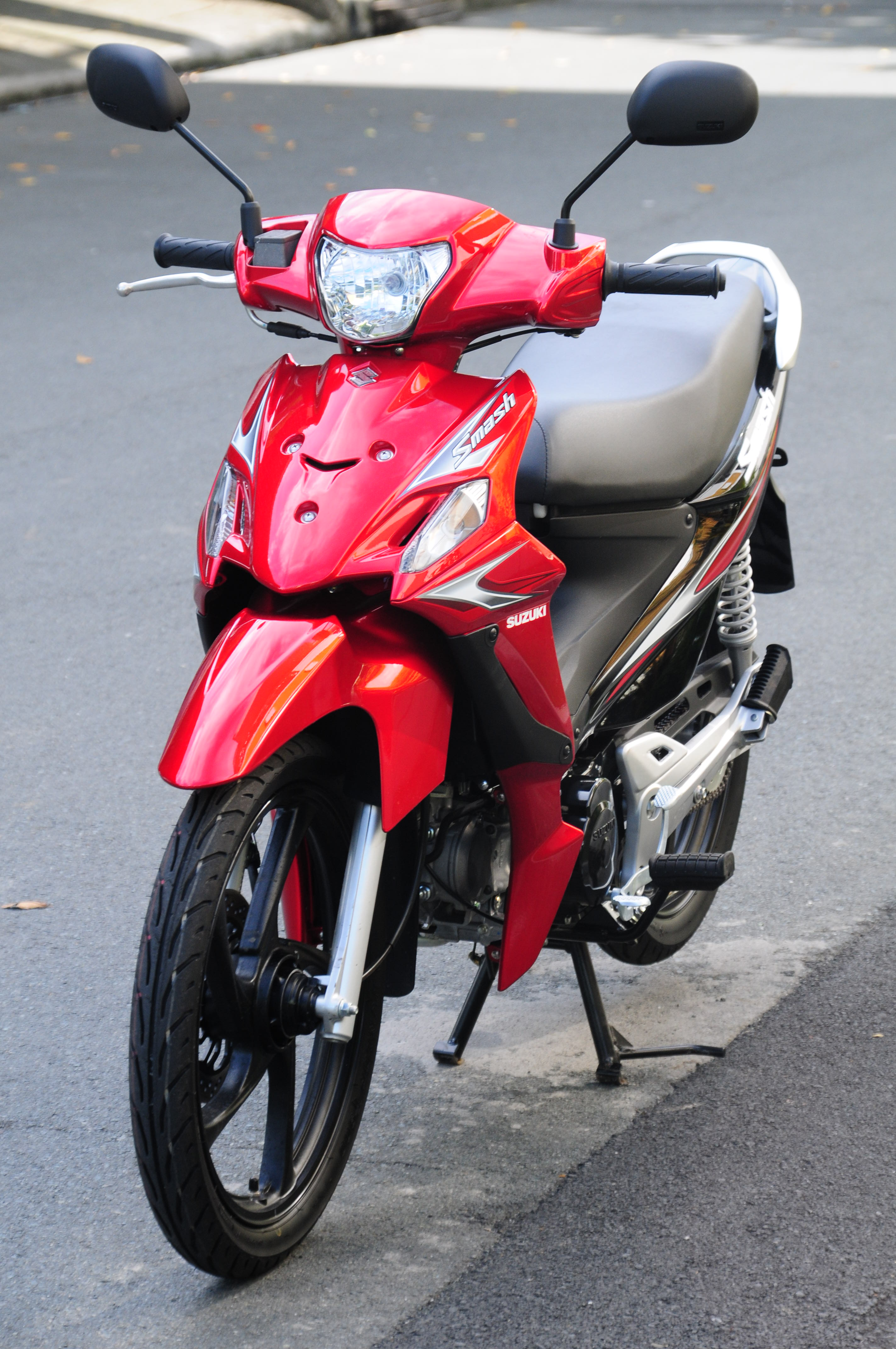 Suzuki Philippines, Inc. could have made the new Suzuki Smash 115 into a new product and given it a new name and nobody would complain or question the move. It can be the new GSX-R115 or Titan 115 perhaps?  Kidding aside, the new model is such a big leap forward from the old Smash 110 Revolution model that it could have been launched under a new name. That’s how good the new Smash 115 is. 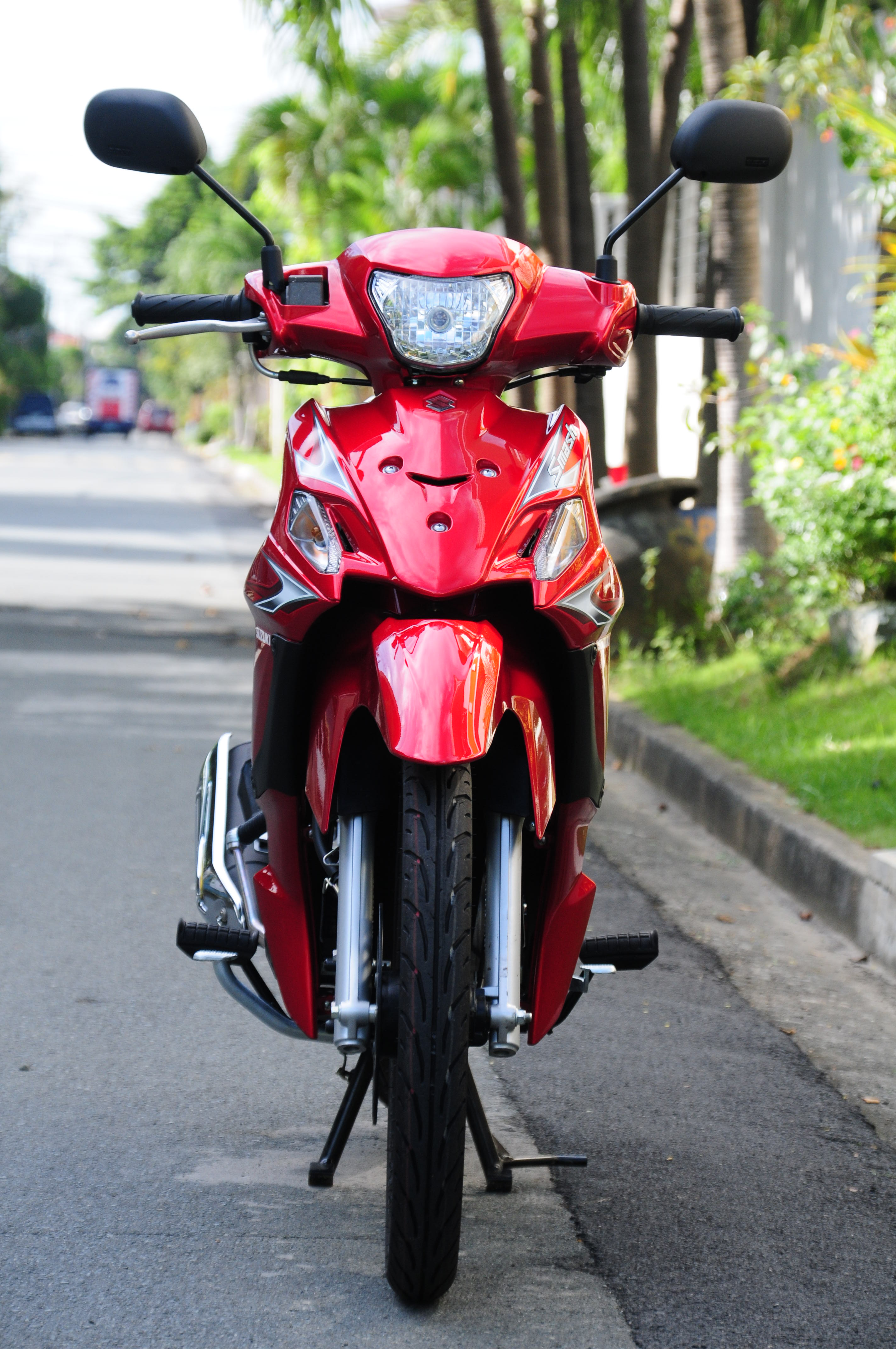 First, it has a completely new engine. With a higher displacement, different bore and stroke dimensions and more compact valve train components, the new engine is more powerful and smoother than the old 110 engine, yet able to maintain the impressive fuel efficiency. The new 115cc engine’s longer stroke increases the maximum torque at a lower rpm than before, making it easy to pull the bike up to speed with brisk acceleration. Seat-of-the-pants experience tells us that it could be one of the most powerful 115cc bikes in the market and would surely be a good base for racing.

The engine still has Suzuki’s patented PAIR (Pulsed Secondary Air Injection) System which ignites unburned gases inside the exhaust port, maximizing engine efficiency and ensuring cleaner emissions. The large-diameter 100mm muffler with built-in oxidation catalyzer contributes to a greener environment while still being able to give a sporty look and performance.

It is coupled to one of the best 4-speed transmissions we have tried on an underbone motorcycle. It shifts smoothly and positively, making missed shift difficult to do. The gear spacing is also good and the resulting acceleration actually made the bike comparable in performance to some 125cc bikes. 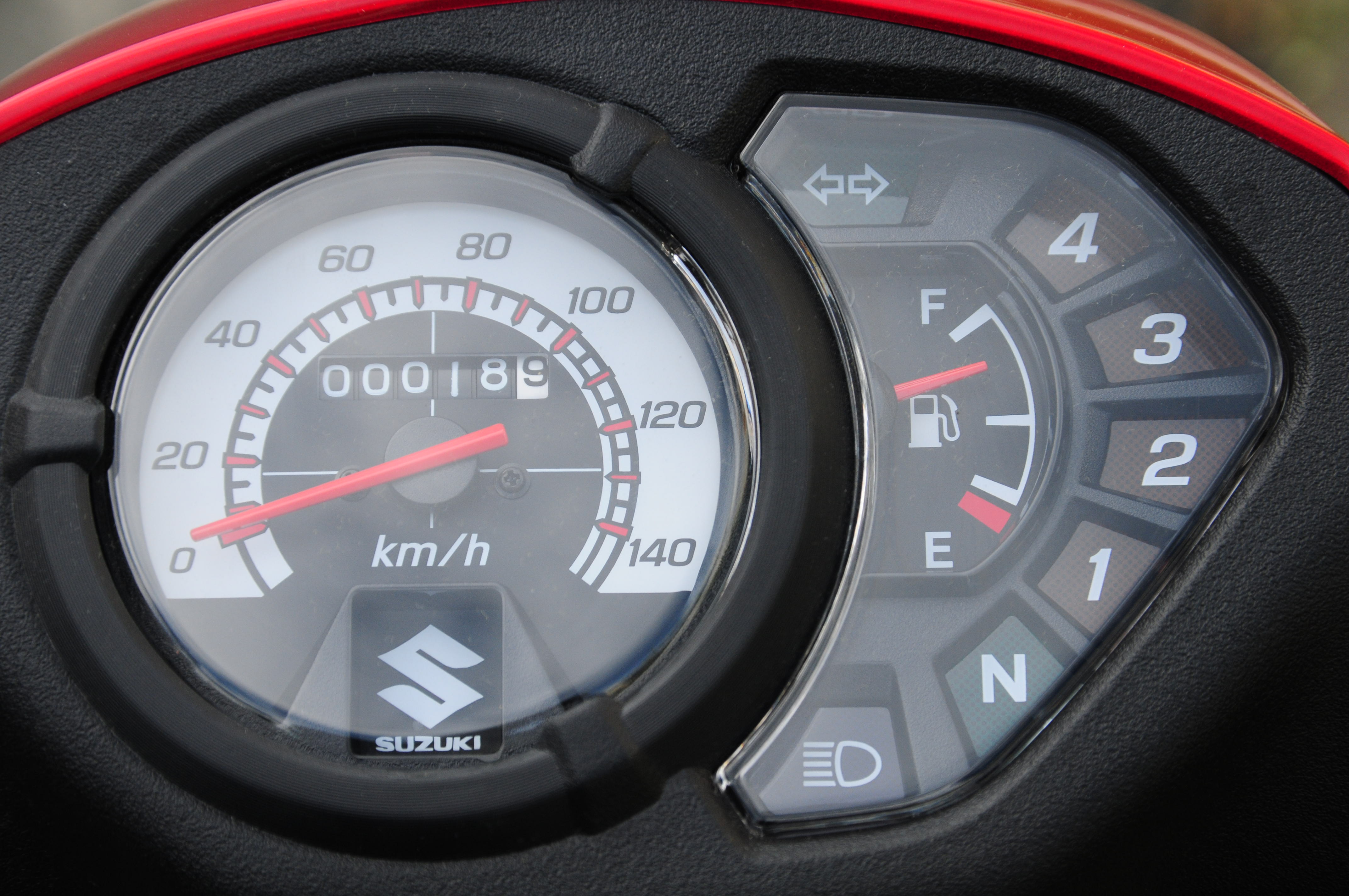 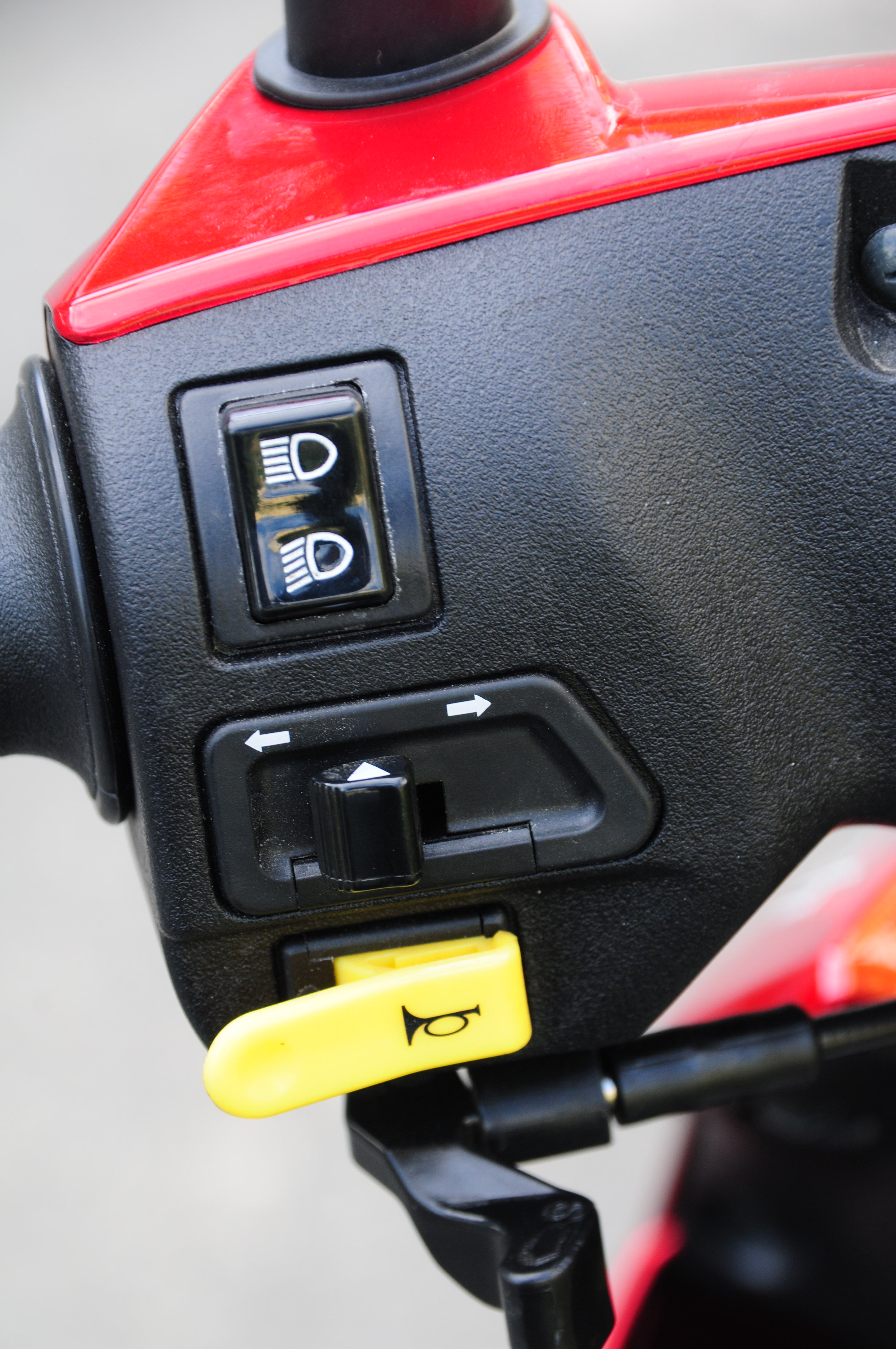 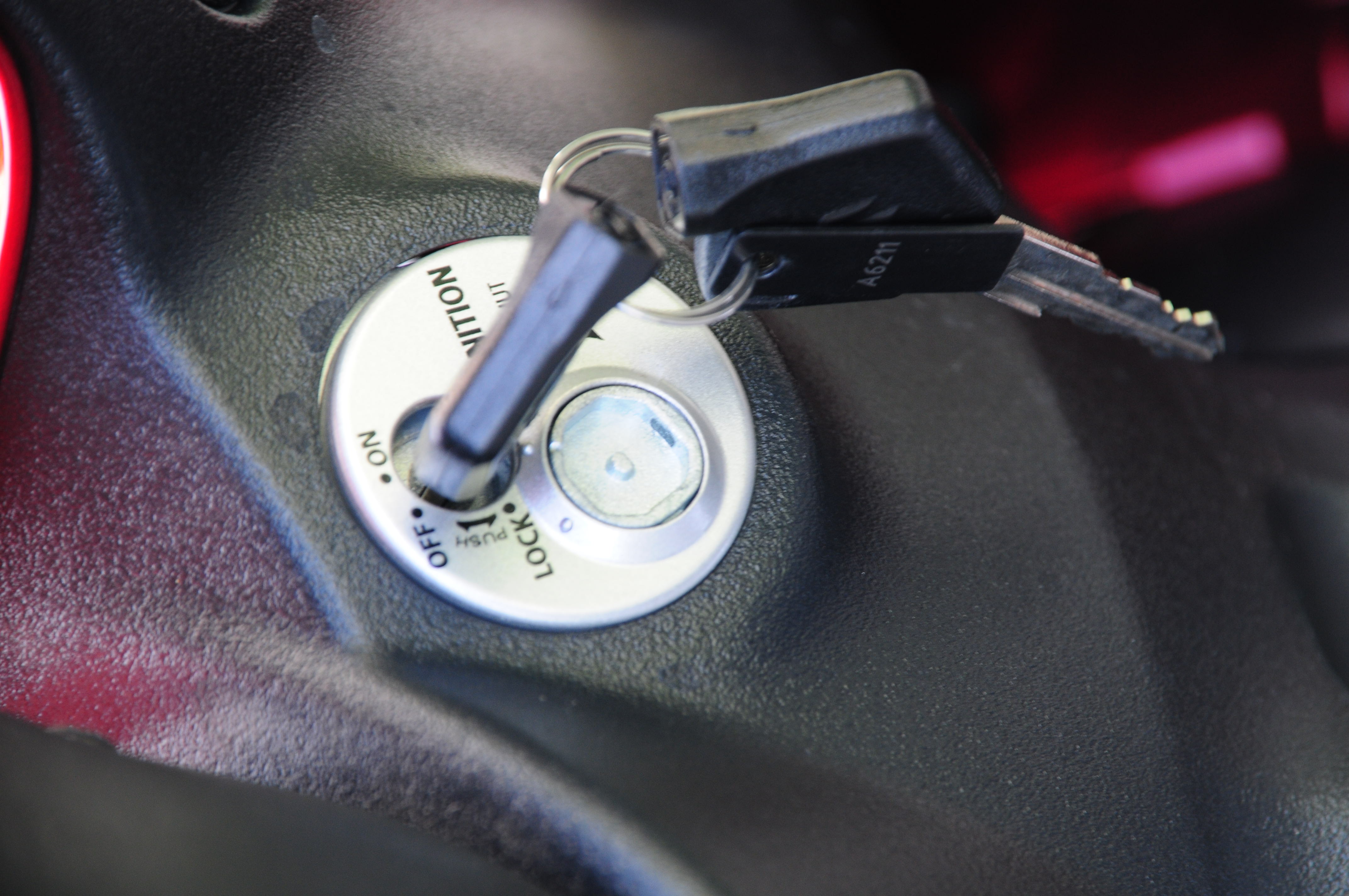 Next is the aesthetics. The new bike has probably the sportiest design we have seen on a Suzuki underbone. In fact it is now sportier looking than the Shogun PRO in our opinion. The front, which enhances its GSX-R inspired layered design, would have to be the best angle of the bike. The edgy, modern and aerodynamic styling of Suzuki’s leading-edge sportbike has been successfully applied to the Smash. The side fairing’s unique execution is definitely an eye catcher. This uplifts the Smash rider’s character. Other features are the new, more compact, high-wattage multi-reflector headlight and rear combination lamp with multi-polygon reflector and transparent cover. The Smash will be initially available in two-tone colors with two variants namely the Pearl Mirage White/Titan Black and the Candy Summer Red/Titan Black. From behind the cockpit, the rider is greeted with a new sports watch-inspired instrument cluster with a highly visible gear position indicator. The gear position indicator feature has always received good compliment from us as it helps the new riders and makes riding in traffic error-free. For those whose bikes don’t have one, how many times have you tried to take off from a long stop and discover that you were in fourth rather than in first gear? 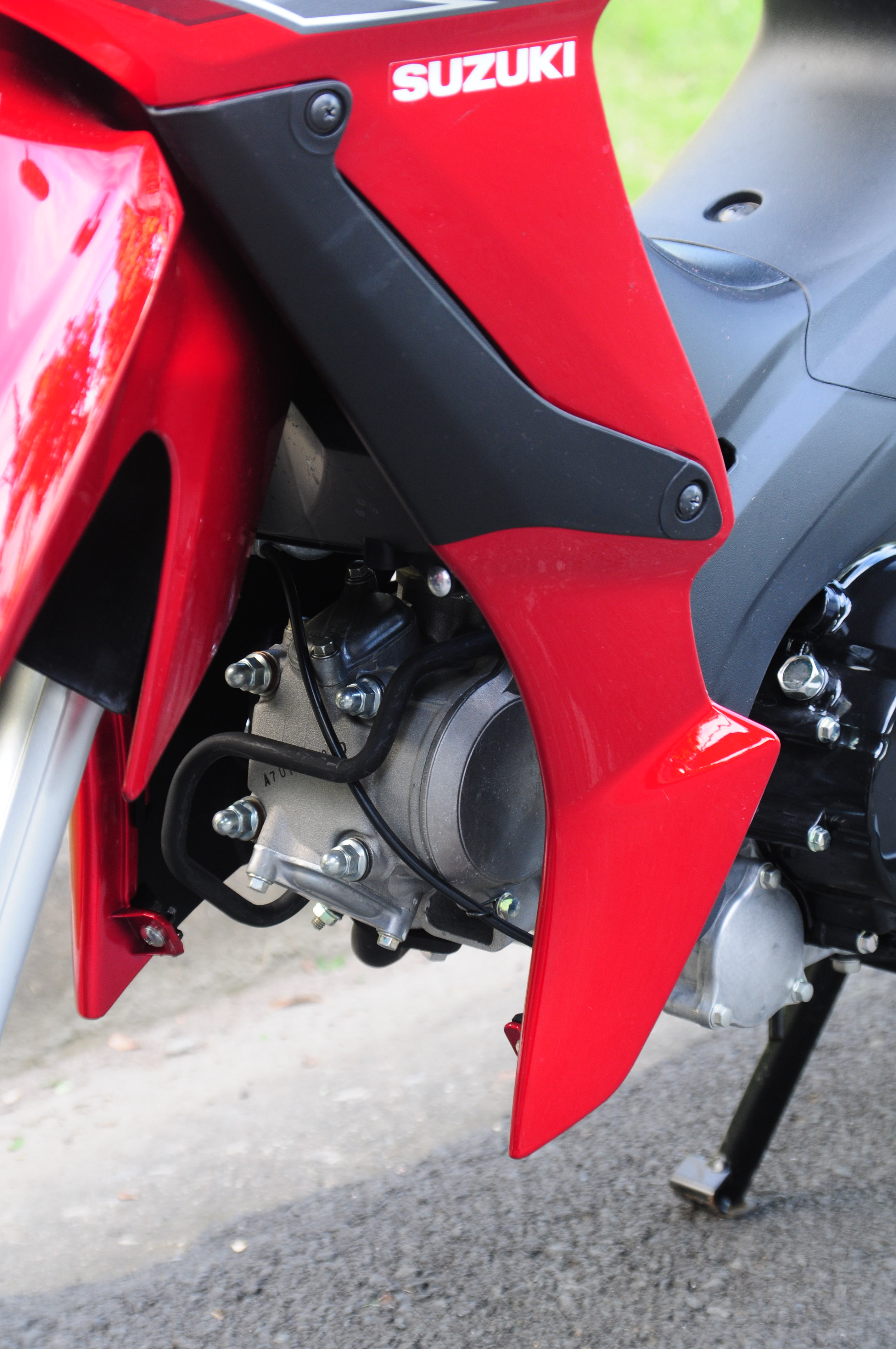 Completing the new look as well as performance-enhancing items are the sleek alloy wheels, front disc brake and the impressive Dunlop tires, which give rider confidence not only in terms of looks and durability but also in bike handling.

To the experienced riders, the new feature of the Smash that they would really appreciate is the new slim, diamond-type compact chassis developed for easier and smoother handling. It offers exceptional rigidity and balance. A lower seat height is set at 750mm to give a well-proportioned sitting position for easier leg reach and to give the rider better ride control. The difference is very noticeable and will make you ride better. 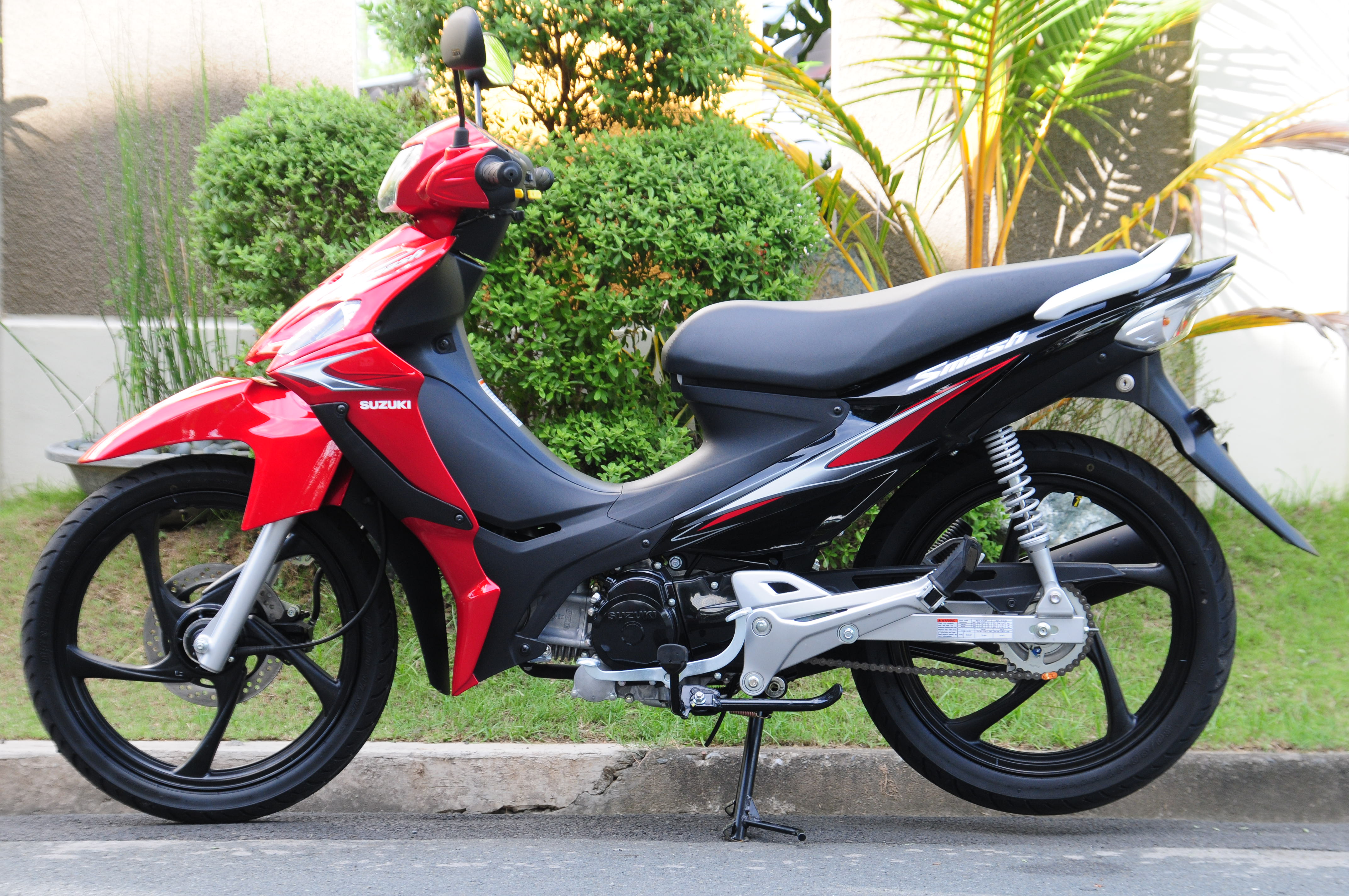 The revised suspension at the front and rear are matched to the quicker handling, yet they’re very supple and comfortable for normal riding or commuting. The telescopic front fork suspension allows quick reaction to road imperfections and shields the rider from jarring impacts. Its reduced spring vibration ensures a stress-free and more enjoyable ride.

Riding the new Smash 115 proved to be enjoyable whether it’s a brisk one or at a relaxed pace. Its high-revving powerful engine and responsive steering make it a genuine sport bike. Meanwhile, the easy and stable handling coupled to a supple ride and smooth engine behavior makes it a pleasure to cruise around with. It’s really a bike with good dynamics! 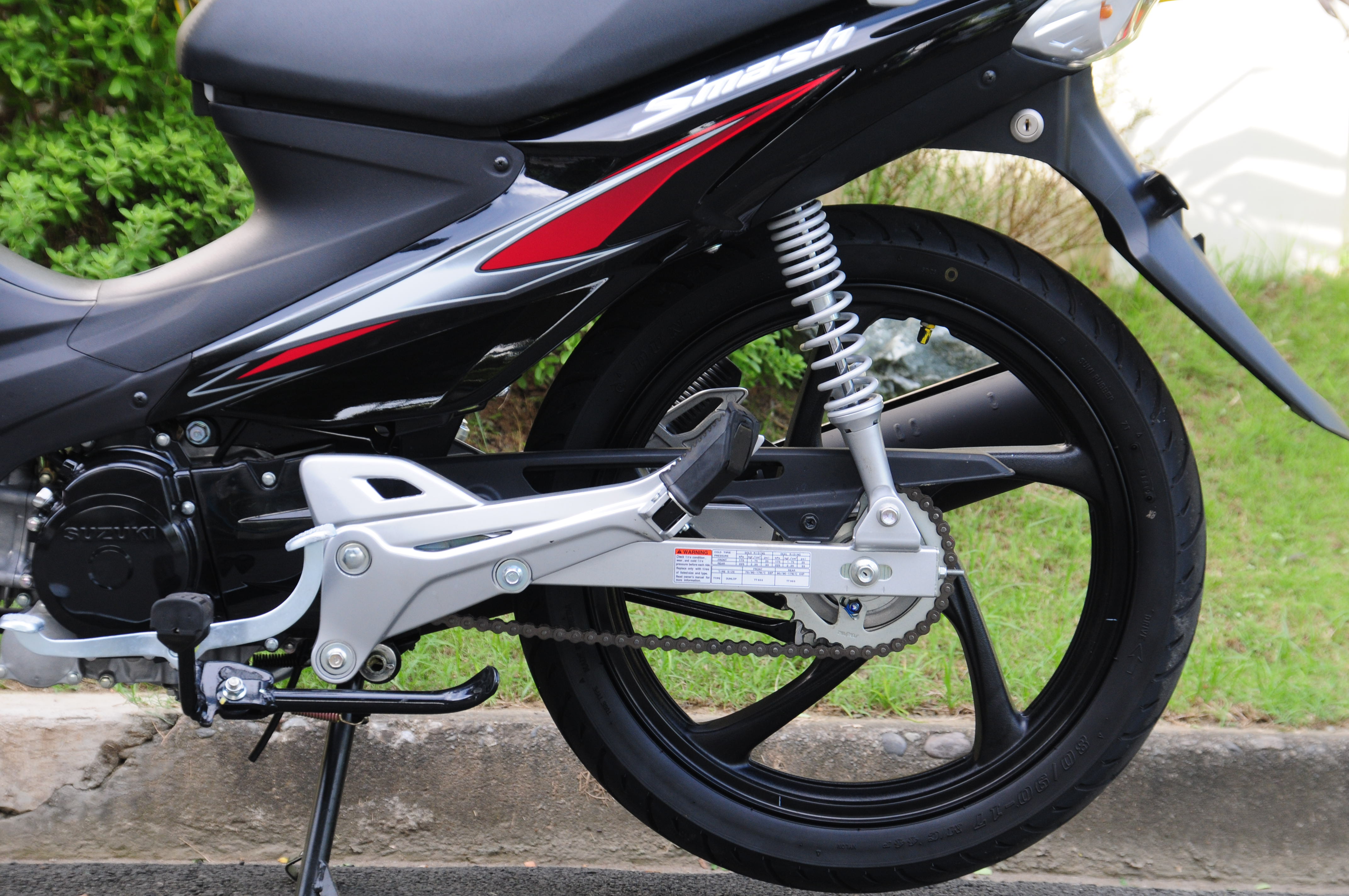 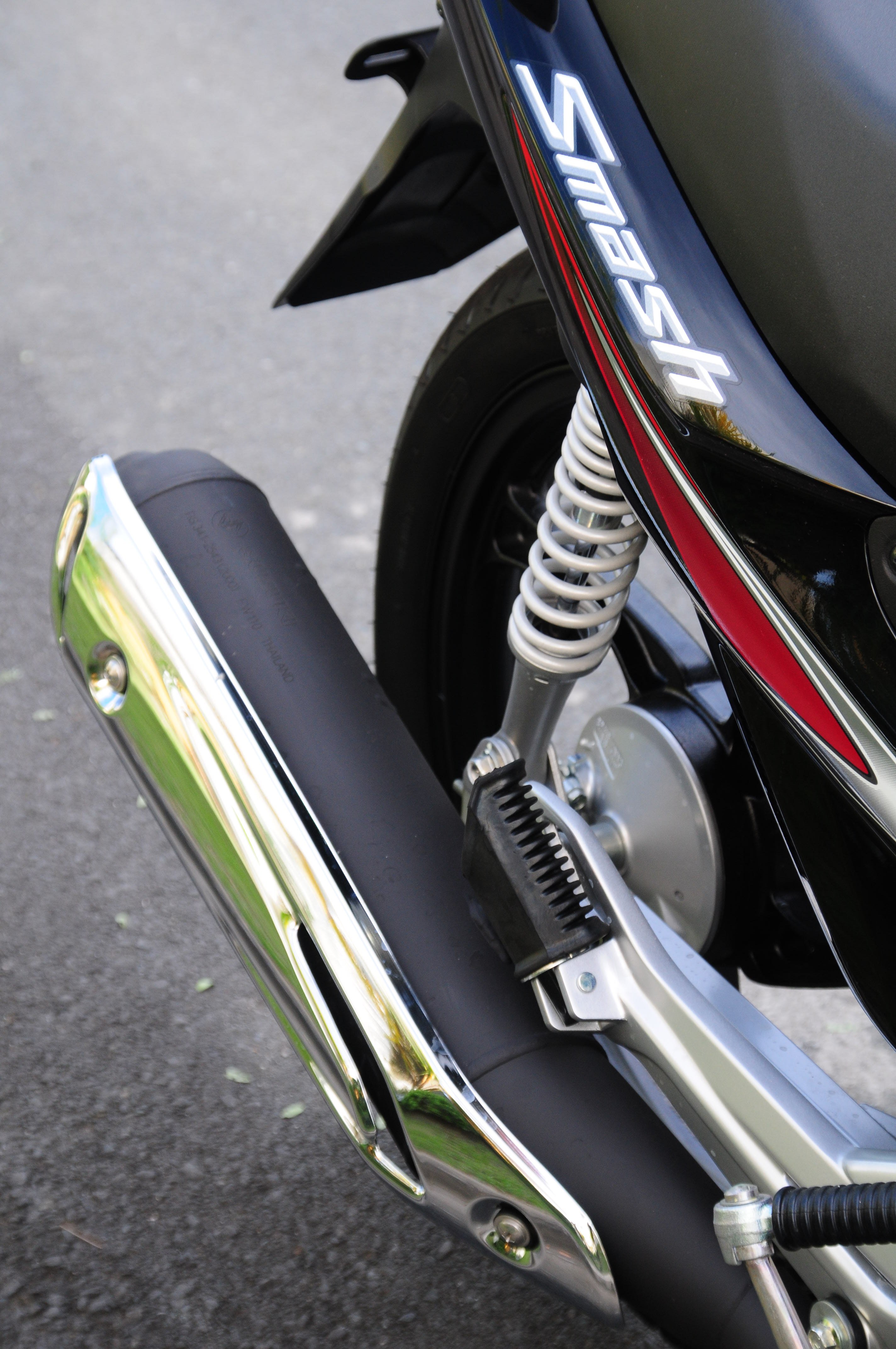 One thing we all noticed that could be further improved on the new Smash is the braking power of the new front disc. All three of us felt that with the bike’s newfound power, better braking will help. It is not weak or unsafe, we just felt it needs to level up together with the engine power and dynamics to fully enjoy sporty riding experience. 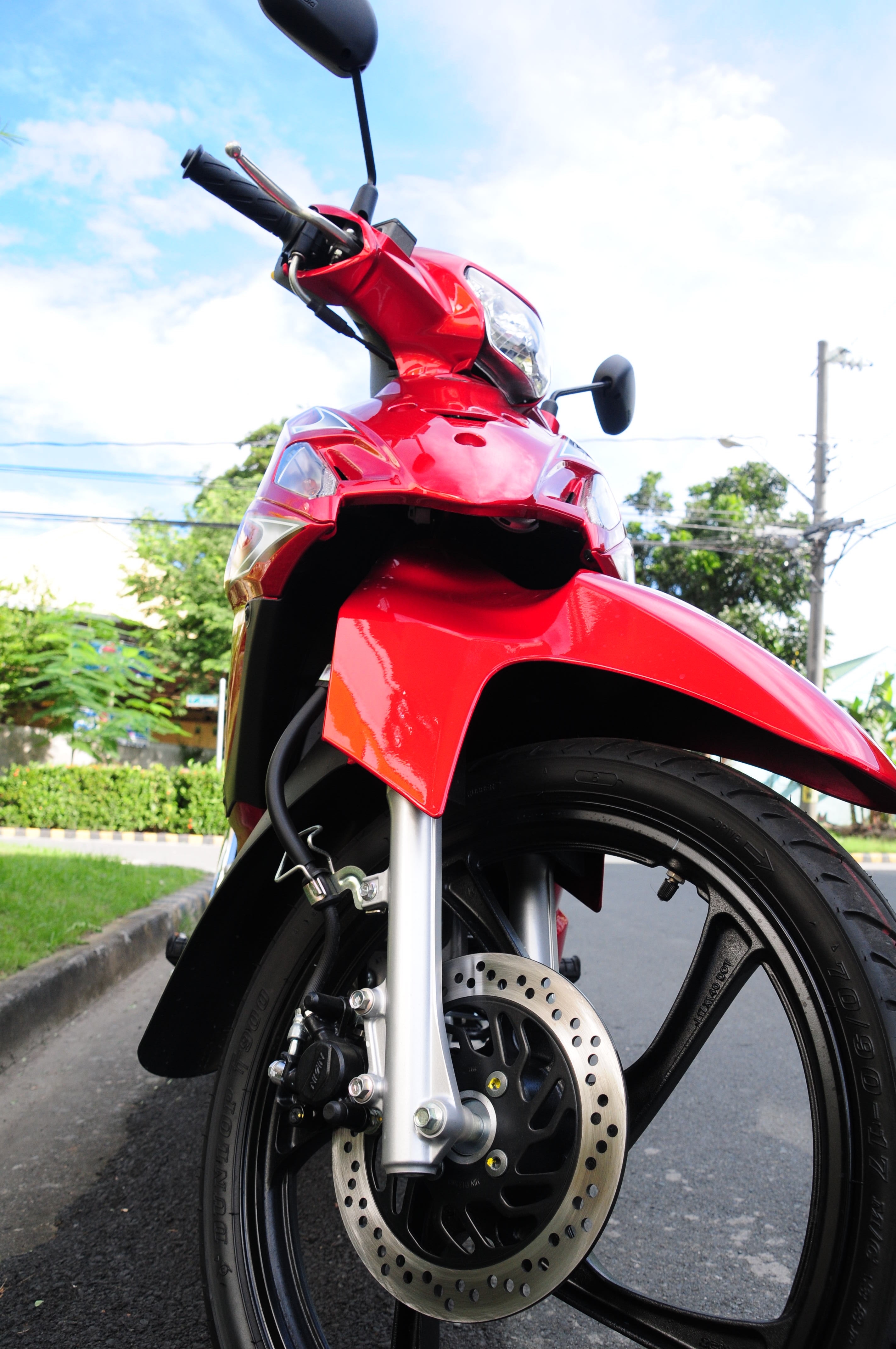 Although much of the improvement is geared towards increased performance and sporty looks, the new Smash still takes into consideration the rider’s convenience and comfort. It still has a large and deep 8-liter underseat compartment to store personal items as well as other essentials like a rain gear and emergency tools. A magnetic key shutter safety feature ensures peace of mind as the ignition can only be accessed with the correct magnet attached to the tip of the ignition key. 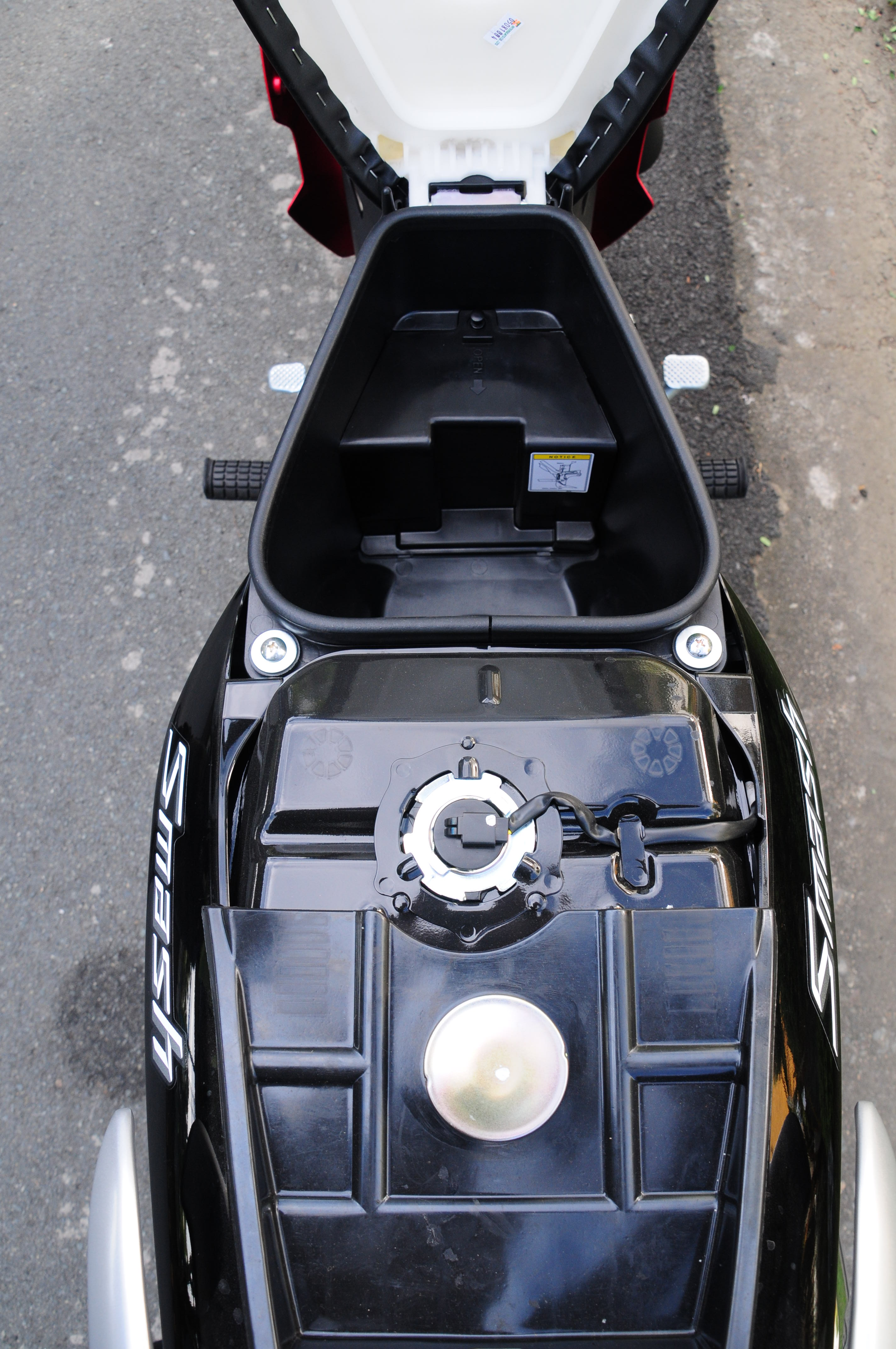 All of us agreed that the new Smash is a pretty bike with a gorgeous body and that it is one of the best looking sporty underbones in the market today. Some new models can stop at that and be able to lure in the buyers. But the new Smash doesn’t stop there. The buyer also gets a bigger and better engine, a new and improved frame, a new front disc brake, a better transmission and better tires. This is clearly not just a looker but one which has more product substance as well. For only a couple of thousand pesos more than the old model, the new Smash Cool 115 is one of the best buys this holiday season. It’s one of the best gifts you can get! 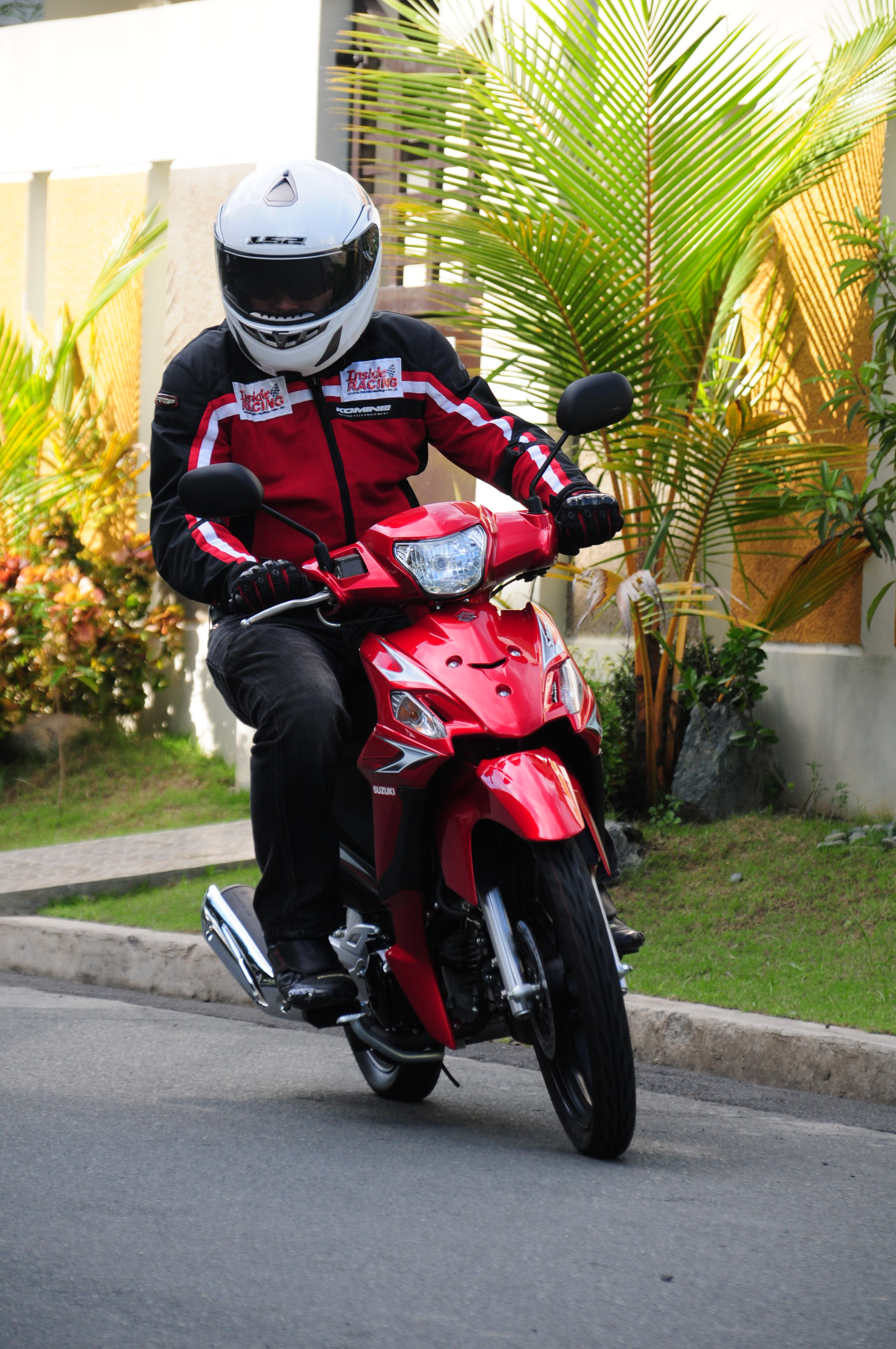 Al Camba
“There is a big difference from the old model to the new Smash Cool 115. Aside from the obvious which is, of course, the fantastic sportbike styling and highly impressive new engine, the biggest highlight for me also is the very good handling which is almost telepathic. It is very light, responsive and fast, yet very relaxing when you want to go slow and cruise. This surprisingly good trait is due to the completely new frame’s geometry combined with the new standard Dunlop tires. The high quality tires alone really make a big difference! They simply inspire confidence when riding the Smash. Normally, the first things that I recommend to change with any new underbone are the tires, but not so with the new Smash. I really like the new plastic panels which are very GSXR-like. Although I am not a fan of the current color and the graphics combination, as I feel it could have been sportier, it does give the bike a more expensive and premium look. I and really looking forward to the time Suzuki will introduce the blue and white model. It should look fantastic! Of course the new design of alloy wheels is very nice; and together with the front disc brake area, is a big step up from the old model. The engine is very powerful and very smooth! Definitely a big step up from the old model. The sound is also quite nice, and the stock muffler emits a sporty rumble when you roll on the gas. It also has one of the easiest and smoothest 4-speed transmissions to use with no miss gear as the shift actuation is very positive. During testing we were able to ride it in second gear until 75 kph before we hit third gear, so I think the top speed of more than 100kph is easy even though it’s only a 115cc. Honestly, I struggled to find any fault with this bike nor recommend any aftermarket items that can make it better. But of course there will always be room for improvement and for me it’s got to be more braking power from the front disc. The initial bite is not that strong and requires more lever effort to brake harder, considering you will more often use it for spirited riding. Overall, the new Smash 115 to me is a genuine, new model. In fact, I feel the very small price-up is not enough considering you get a bigger engine, new body, front disc brake, new frame, and better tires which means that it is a bargain!” 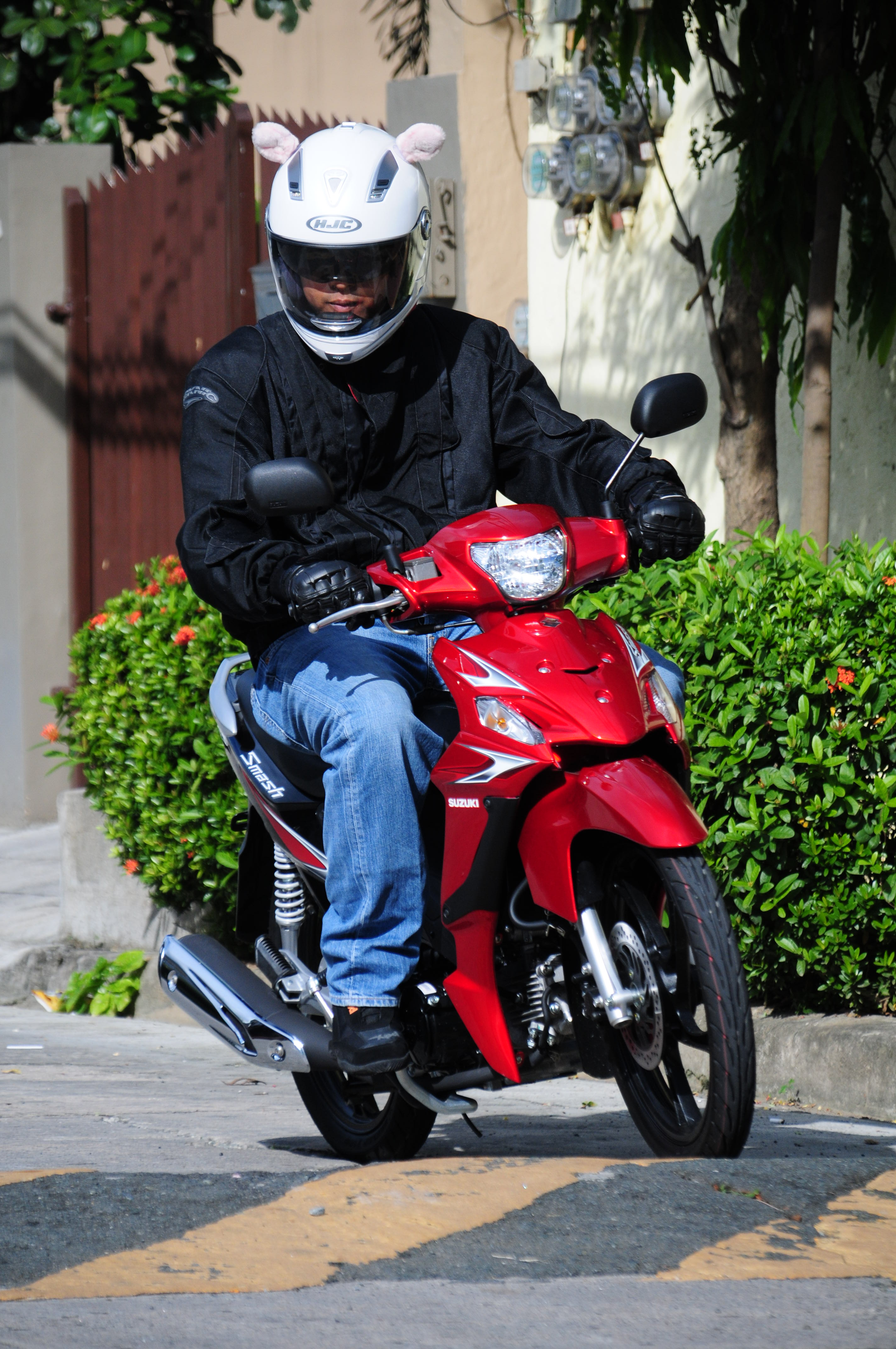 Philip Bonza
“I very much like the style, the flow of each plastic part and the combination of the black plastic and the red panels. The alloy wheels are very, very sporty also. I like the look from the front fender to the handlebars, and side panels are very unique in design. However, the rear is just normal. The overall appearance makes the new Smash look like a small sportbike. The instrument panel looks small because of the large numbers in the gear indicator and the small markings of the speedometer, but is visible and adds a sporty look. For a 115cc, this new engine is very powerful. All the gears are easy to use, easy to get top speed, which is almost 80 kph for the second gear, so I’m very, very impressed with the power. The rear brake power is just as expected for this bike but the front brake is a little disappointing. For the riding position for my size, I feel that I’m too big for this bike. The handlebars are not that wide, but it’s still comfortable to ride. And also the position of the footpegs, gear shifting and the brakes are comfortable, and the saddle is soft. I give this bike 4.5 stars for the style and 4 stars for the power and value. Overall, I could give this bike 4 stars out of 5.” 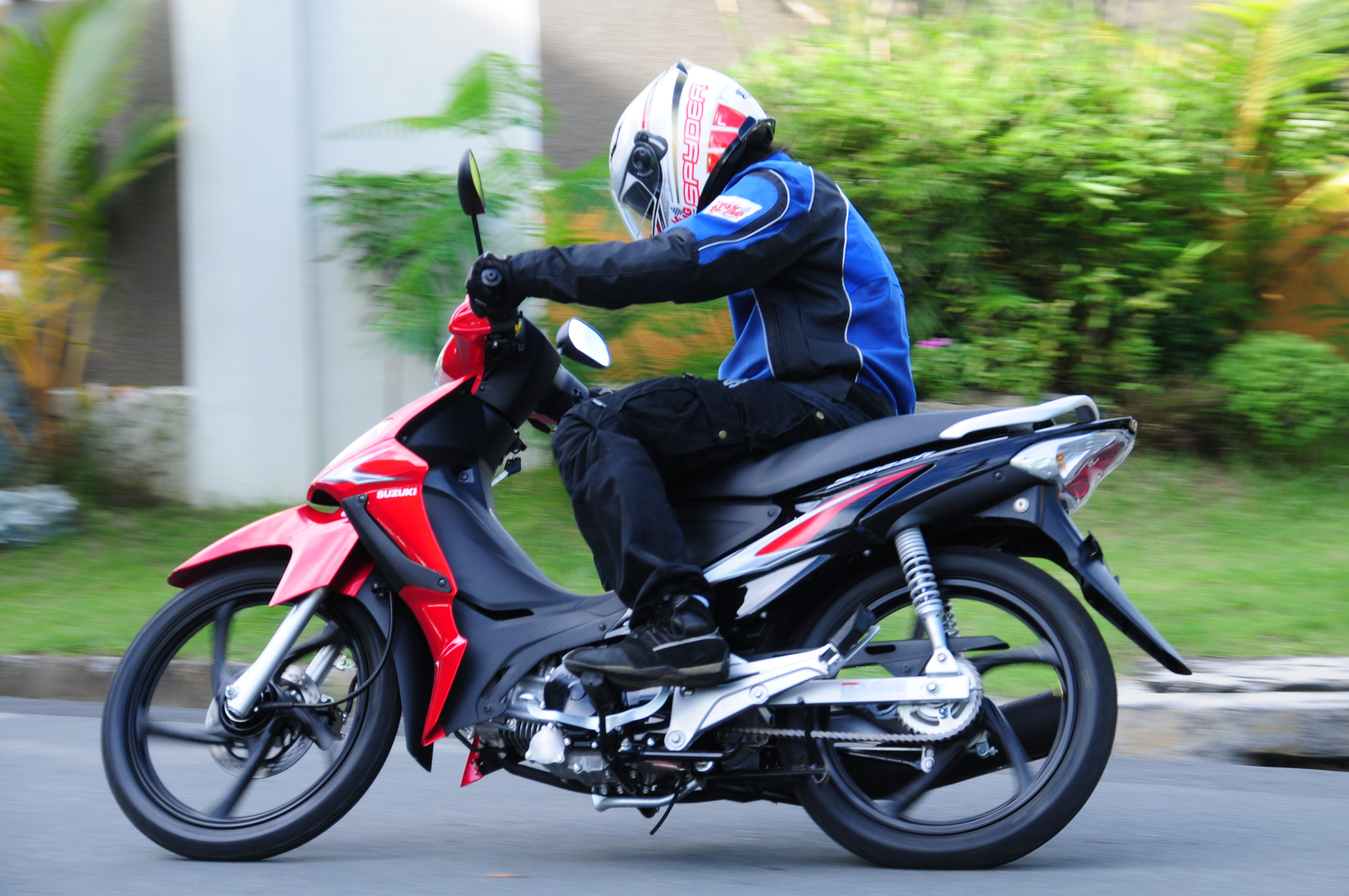 Ricci Abrina
“Engine is very smooth with adequate power and there’s not much vibration with this new engine. The body is very stylish for me because of the sharp edges and small frontal area. The standard Dunlop tires are very good, they’re so sticky! Another positive feedback is the shifting. I like the smooth shifting, going up and down from neutral up to fourth, it’s so smooth, there are no hitches or glitches! I also like the underseat compartment, it’s deep. You can put a lot of things in there. Of course you can put a helmet and it’s big enough for other things like water bottles. I also like the gauges, the cluster is very compact and easy to read so it’s a good design, and the color coordination and contrast of the panel are easy to read. They did a good job! I also appreciate the alloy wheels, which look very nice with the whole design of the new Smash. I think the brakes, both front and back are not that strong but the stock tires, which are really good and are very sticky compensate for the lack of braking power. I guess there are more positives than negatives in my opinion.”

*This article was published in InsideRACING’s  Volume 8 Number 10  2010 issue. 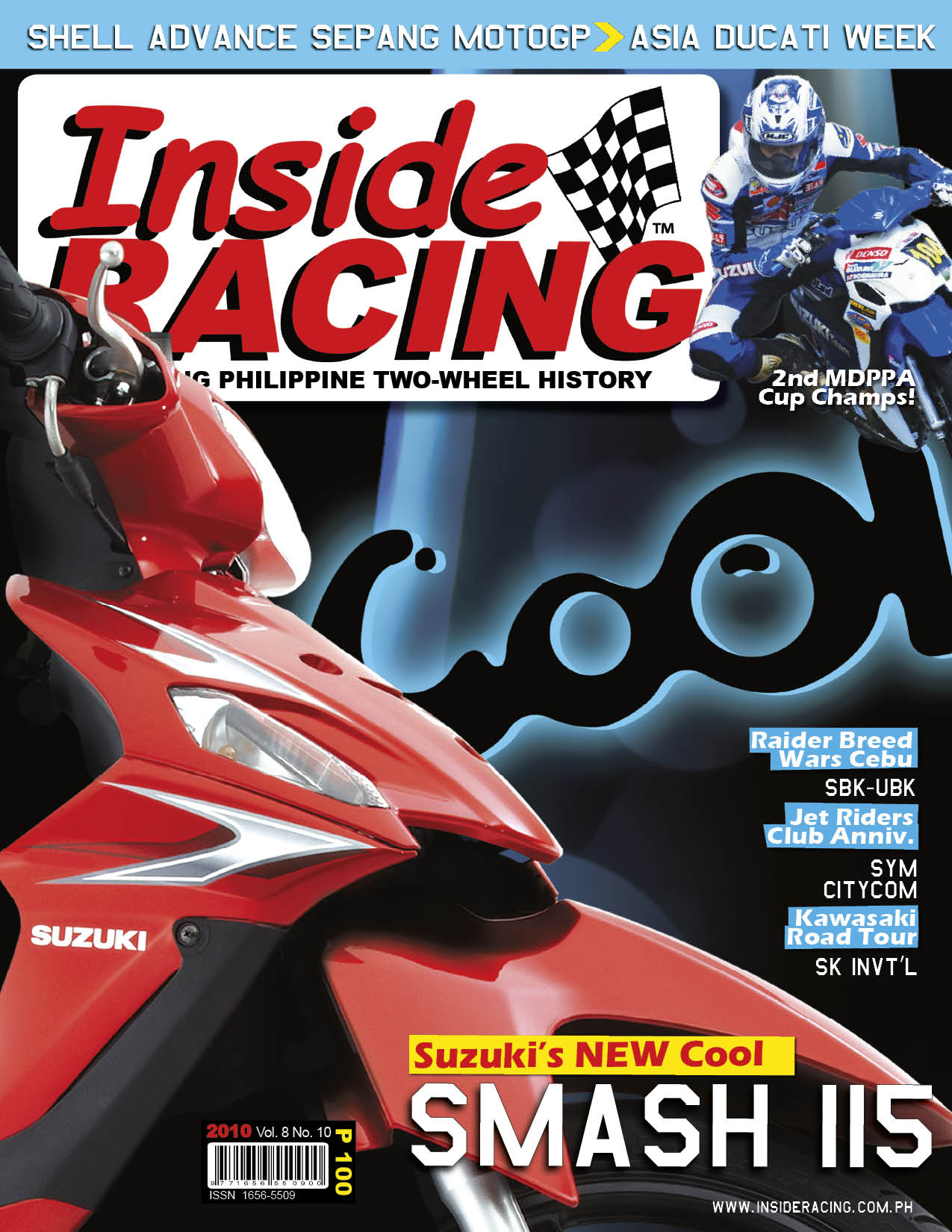