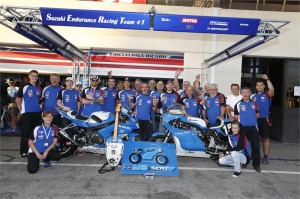 Racing in 30th Anniversary GSX-R colours, and in celebration of 35 years of the French, Le Man’s based team managed by Dominique Meliand, SERT has now claimed 14 Endurance World Championship titles.

DILG: Back-ride will be allowed starting July 10 but for couples only

Bajaj RE aids in Frontliners Contact Tracing in Pasig City

Be smooth when you ride in the rain