The 2-stroke SYM Jet was the first scooter to successfully introduce many Filipinos to the affordable scooter lifestyle almost ten years ago. To the delight of many loyal fans, there is now a 4-stroke model with impressive handling and performance that is more sporting and more attractive than any of its previous iterations. 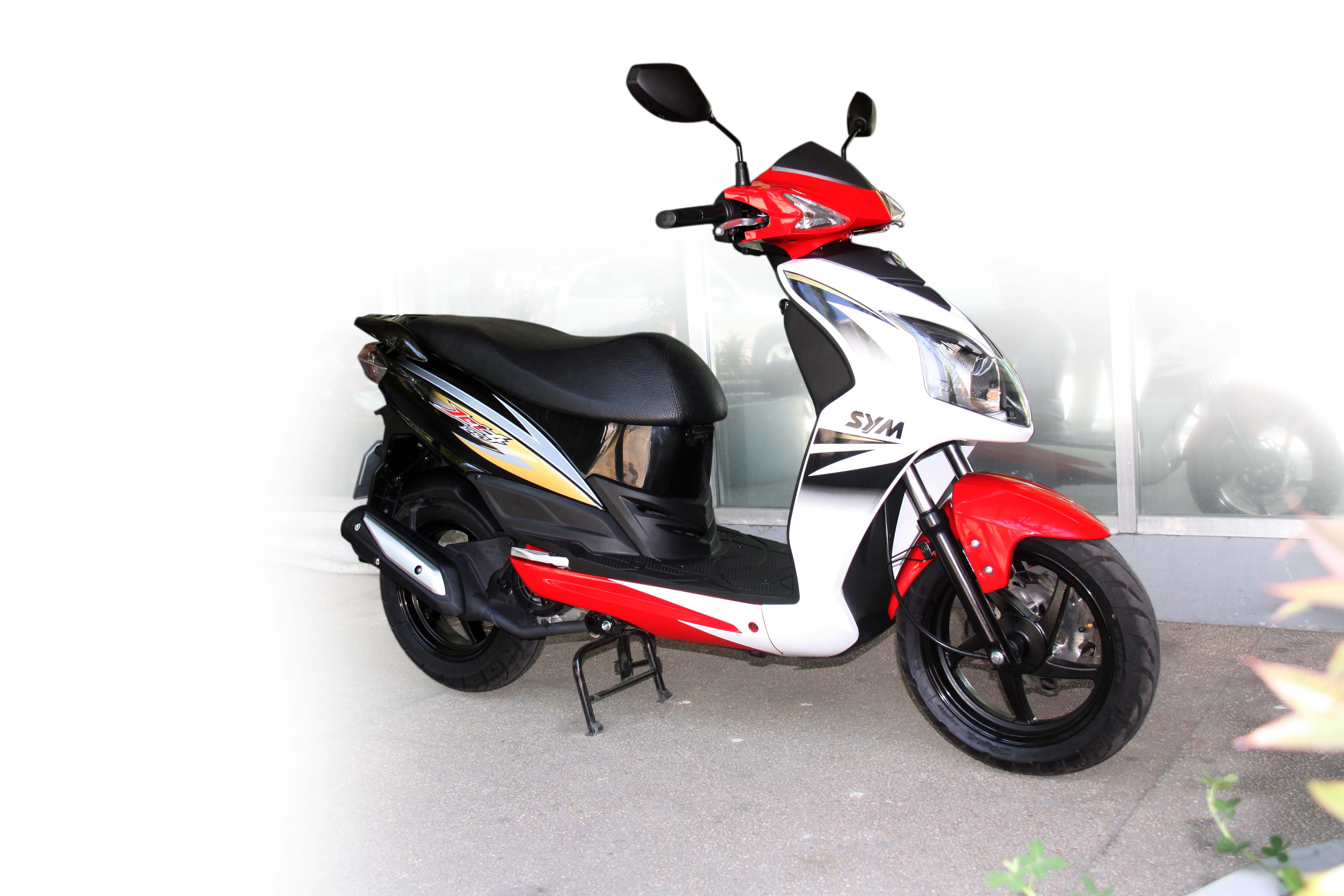 Mitsukoshi Motors Philippines, the exclusive distributor of SYM in the country, proudly introduced the scooter to carry the iconic Jet name. Since the introduction of the original model many years ago, the Jet scooter has spawned its own club, the Jet Riders Club that has now grown into a nationwide association with regional chapters. The scooter was also one of the bestselling 2-stroke scooters to be officially sold in the country. Sadly, with the demise of 2-strokes in the market, the Jet was momentarily put in the sidelines by Mitsukoshi in favor of 4-stroke models like the Radar, Joyride and the Fighter, and various underbones. 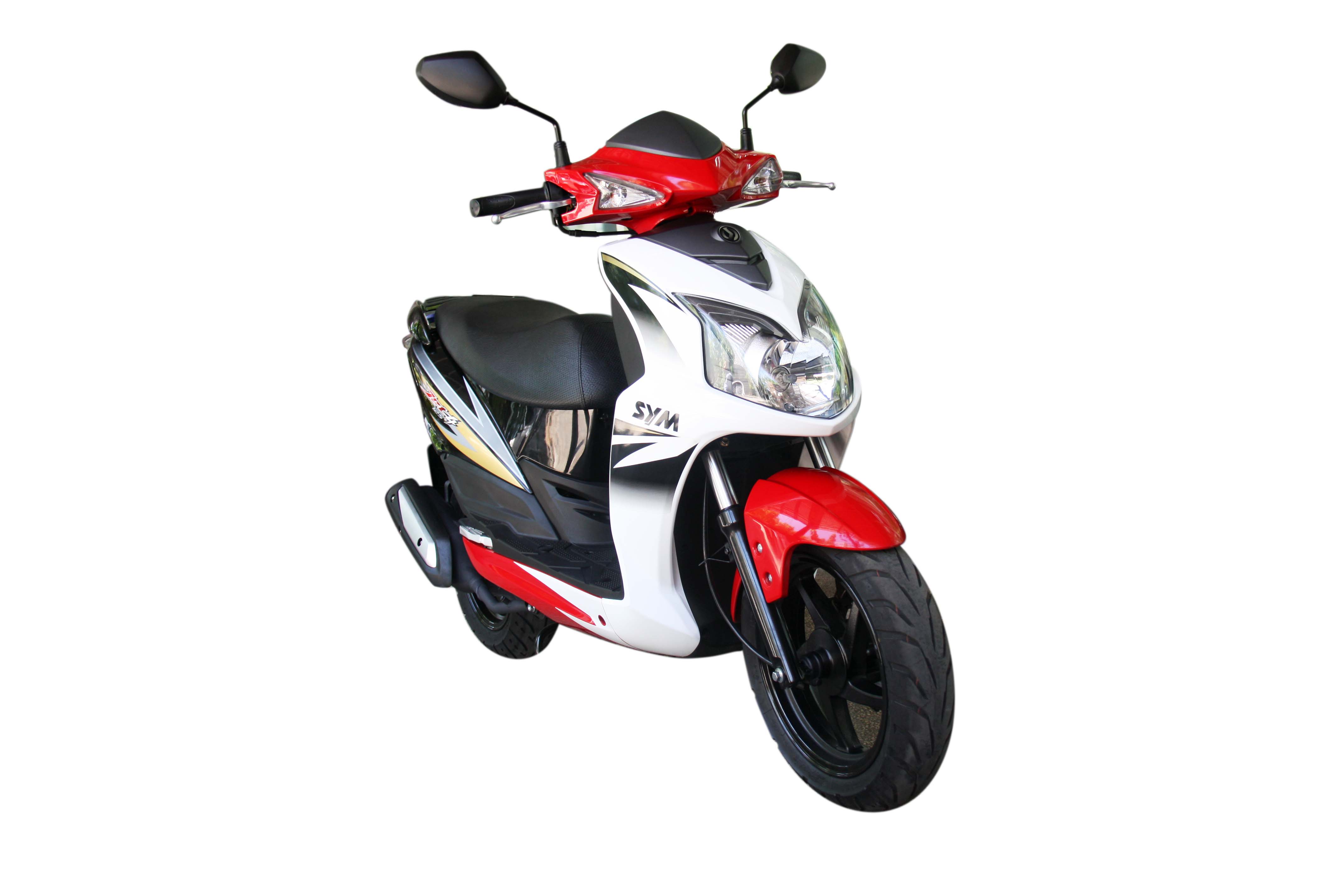 But that has now changed with the new revolutionary Jet 4. It was a big takeoff from previous models in terms of the technical aspects as well as the improvement in build, quality and performance. It’s also perfect timing that its introduction coincided with the growing trend in the automatic segment of the market. With an introductory price of only P68,000, the new Jet 4 was well poised to recapture its glory days.

The most significant change was the new 125cc 4-stroke engine that is more environment-friendly compared to its 2-stroke forebears. The new Jet 4 operates more smoothly, quietly and cleanly than the old 100cc 2-stroke dinosaurs. It can accelerate the relatively light 113kg scooter briskly while delivering exceptional fuel efficiency. Most importantly, the 4-stroke engine was more refined and easy to maintain, making everyday use more comfortable and a user-friendly experience. 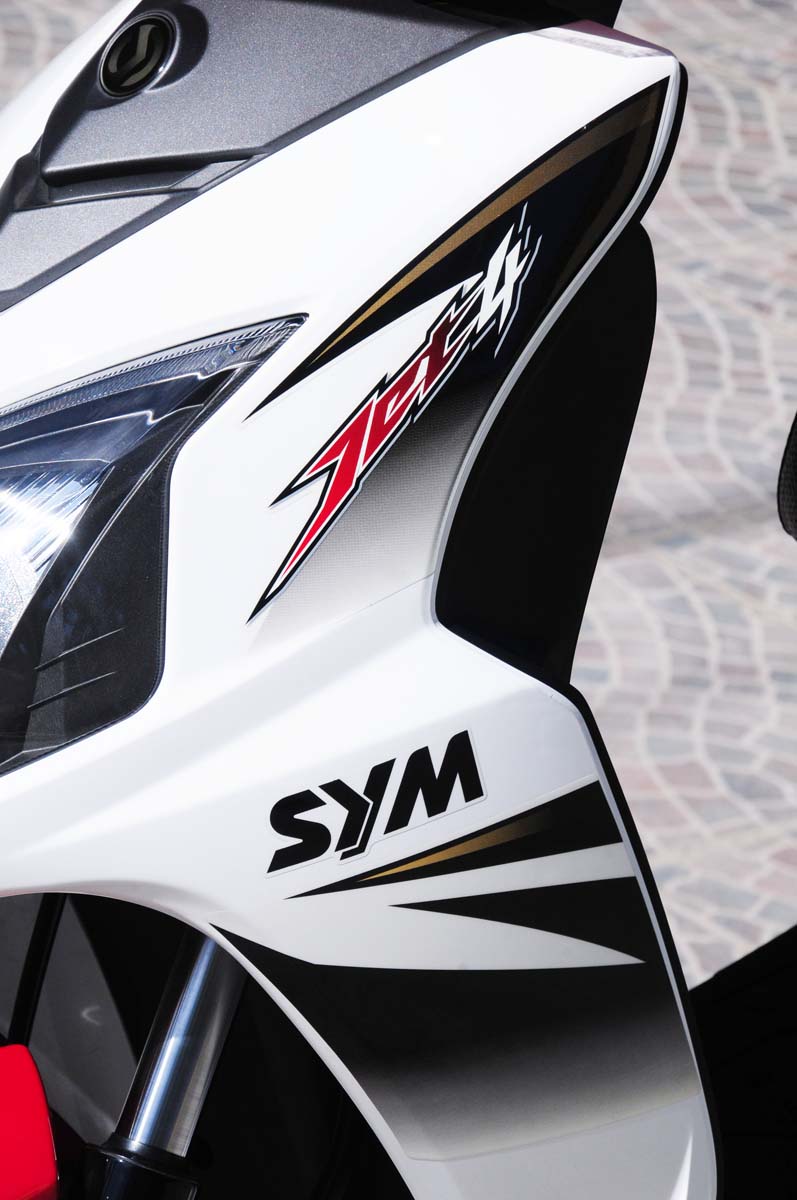 The new Jet 4 looked fantastic. It has a very up-to-date and sporty shape and an aggressive body design and attractive graphics. It has a large modern headlight and tail lamp designs for greater presence. The front profile is now slimmer and more balanced compared to the bottom heavy profile of the old Jets.The handlebar cowling and the front fender’s shape was very modern and aggressive just like on modern sportbikes. Though it’s still has the traditional flat floorboard for utility, the overall shape was very sporty. It was available in four different sporty color combinations to suit anybody’s taste.The instrument panel design was very impressive and features a digital clock, fuel gauge and trip odometer and it looks particularly attractive during night time with its electric blue hue. It is one of the best we have seen. 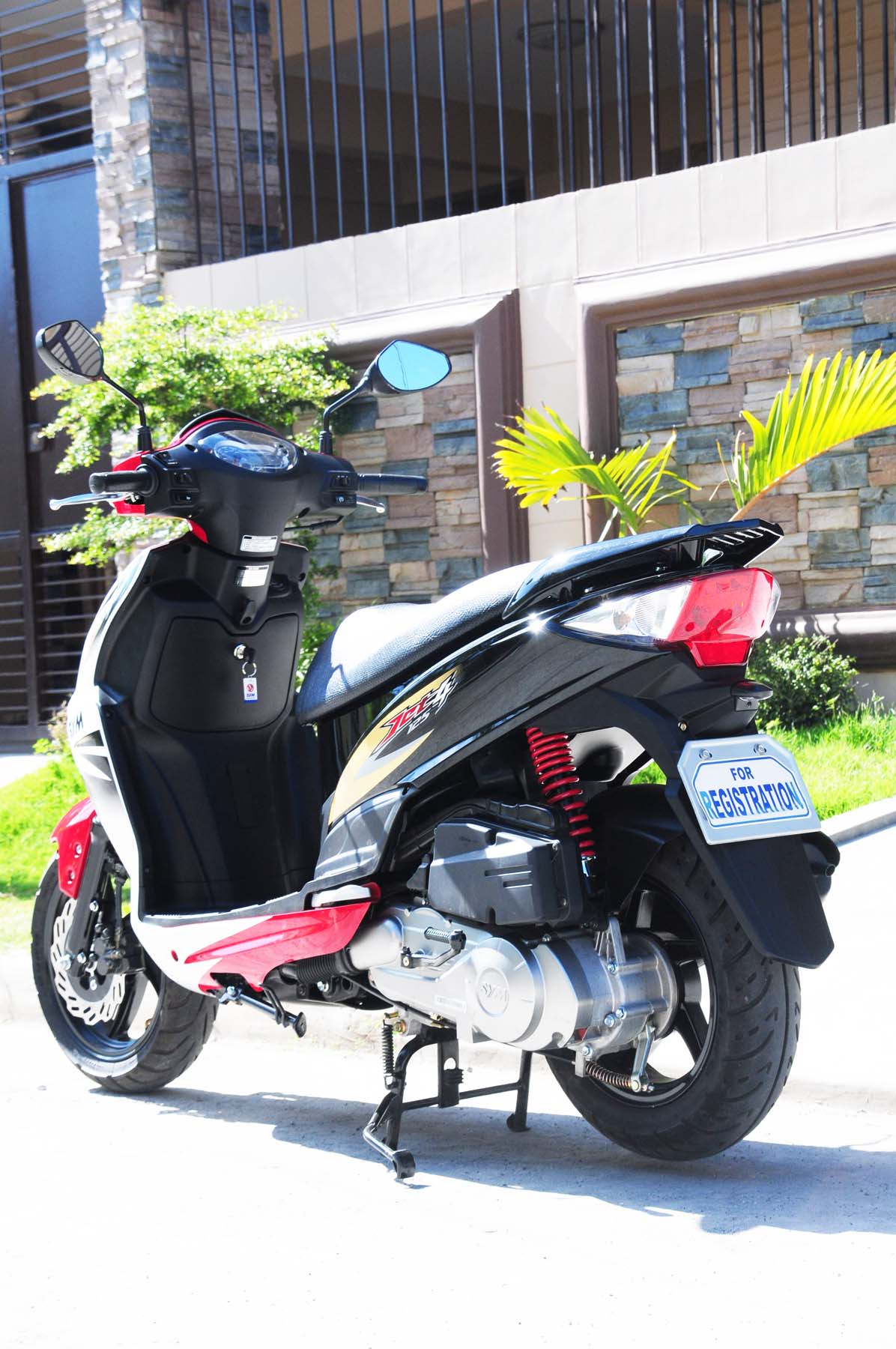 Practical features include a spacious underseat compartment that can accommodate a full face helmet, a lockable front console, and a luggage rack. One convenient feature was that there was a bright yellow security cut-off switch under the seat compartment that prevents the Jet 4 from being started even if the key in the ignition is activated. Also, the seat can easily be opened via the ignition switch. 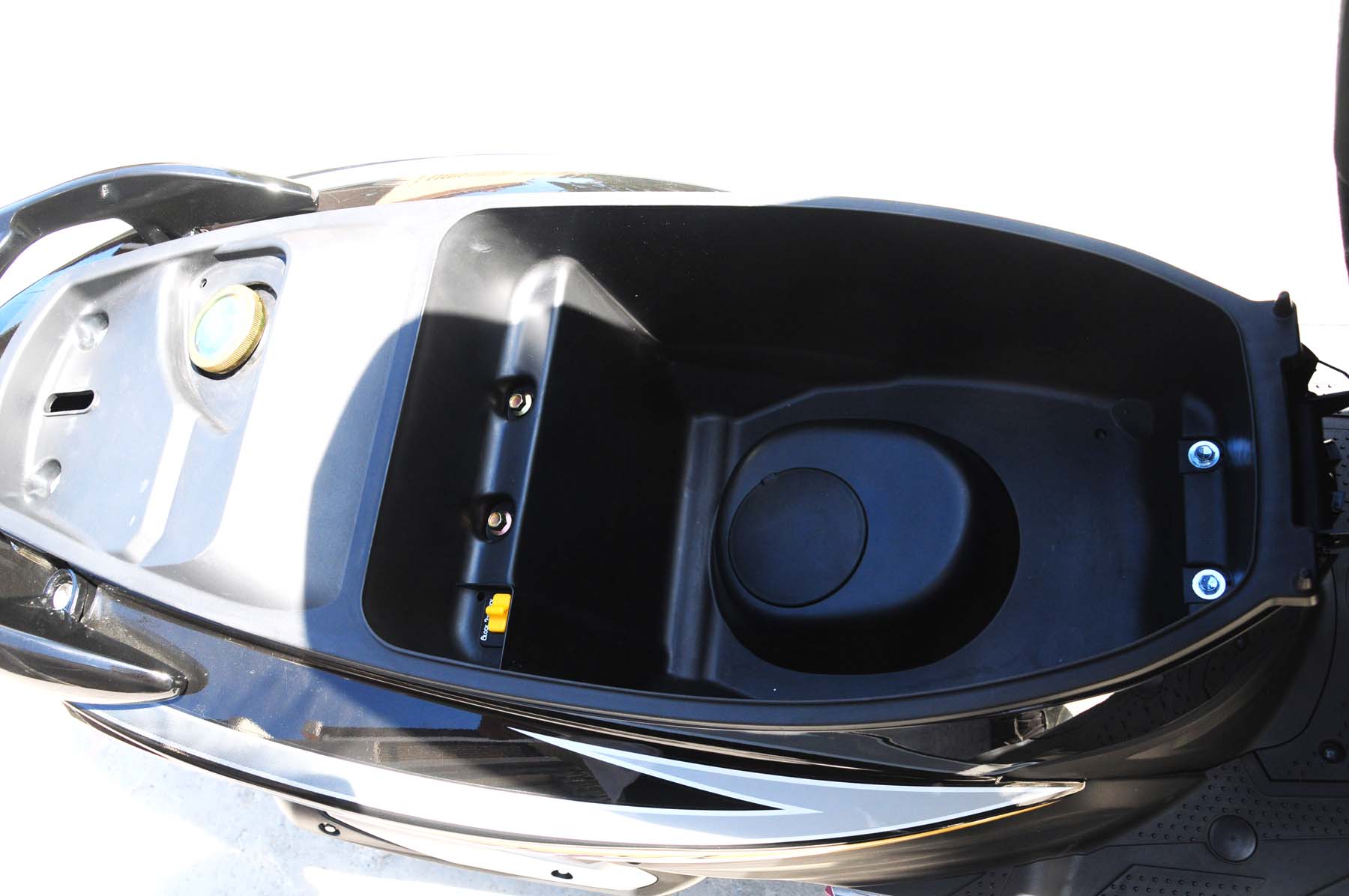 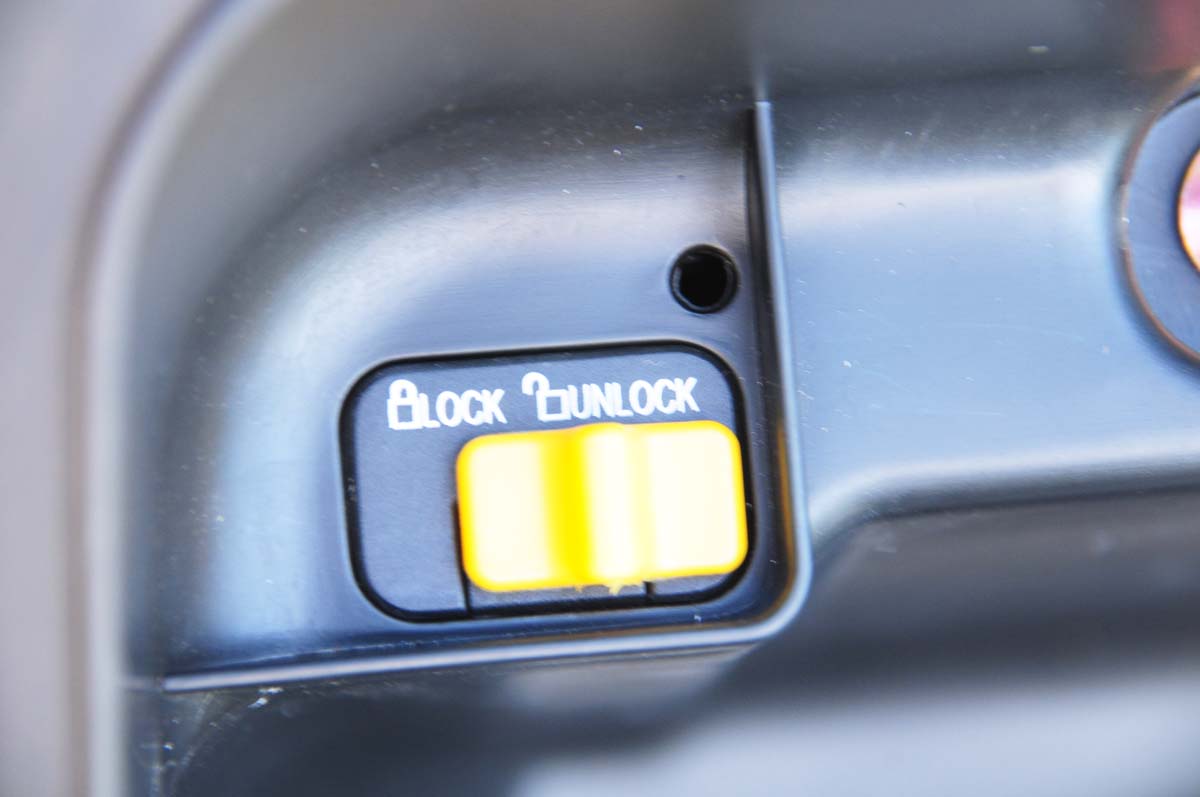 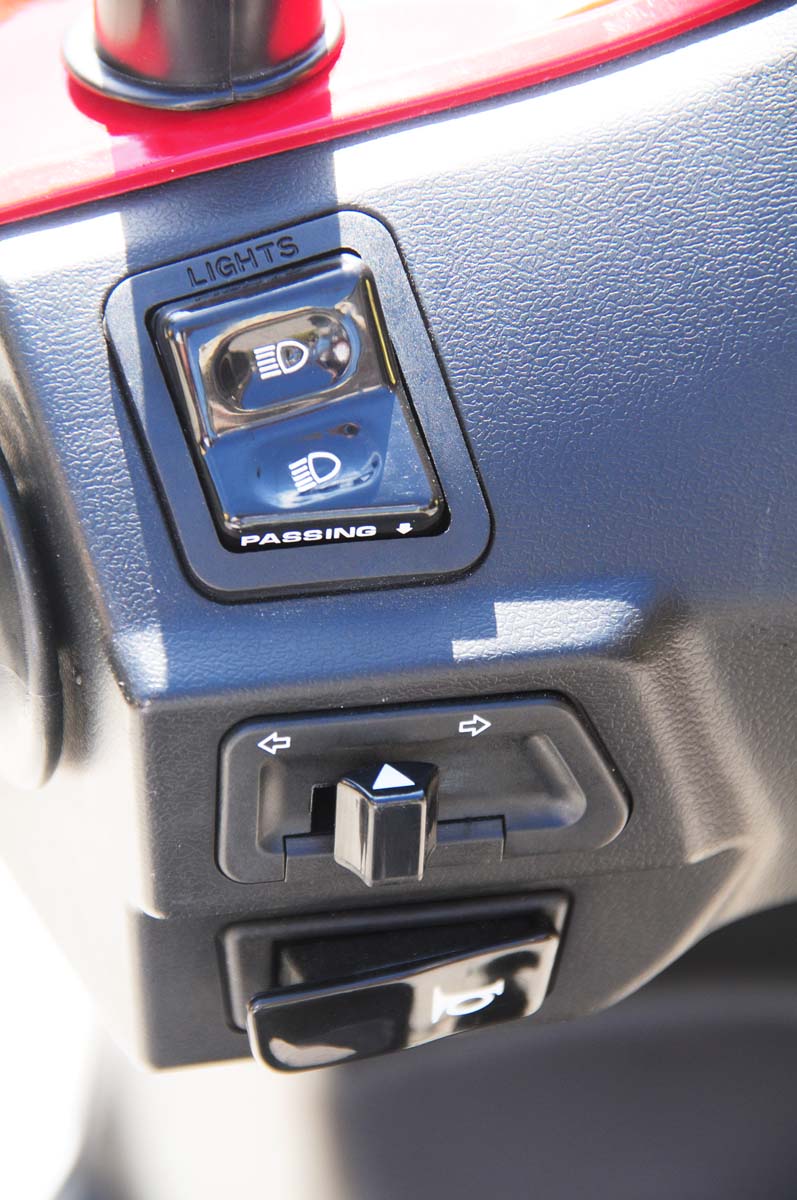 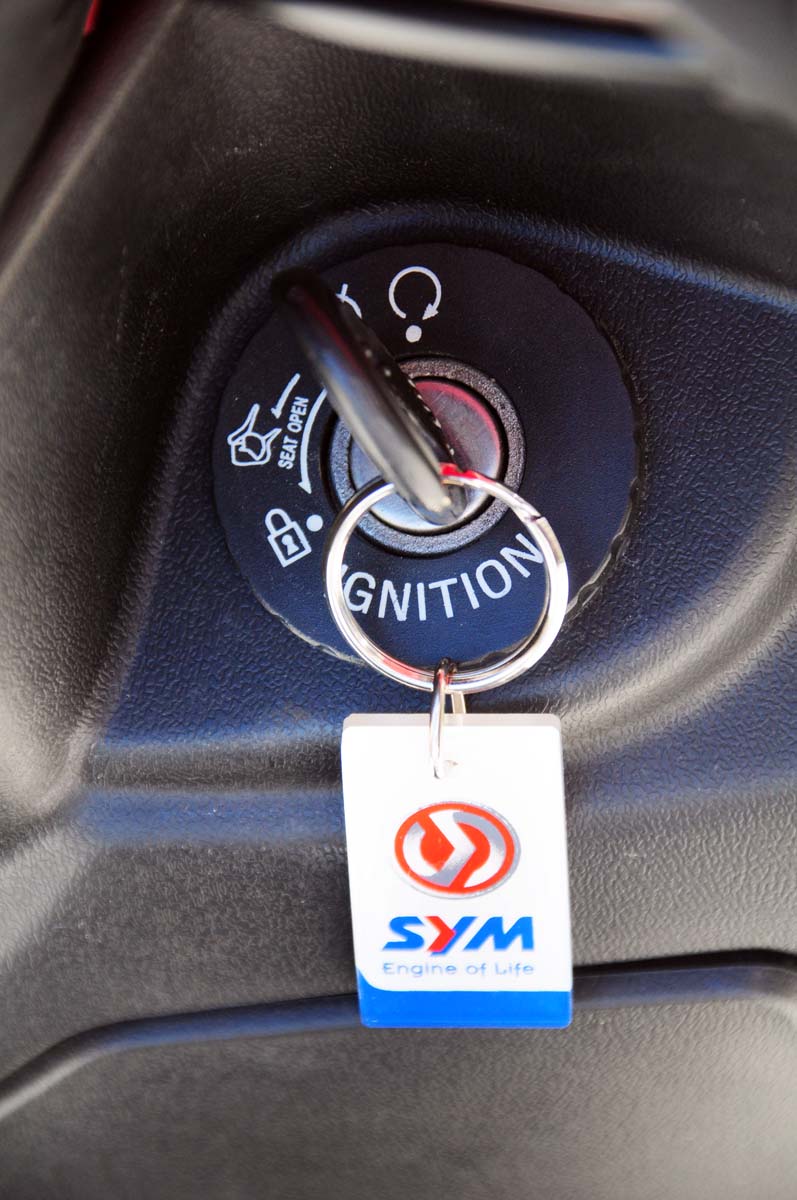 It is equipped with a 13-inch from wheel with a wide 120/60-13 tire combined with a 12-inch rear wheel wrapped with a 130/70-12 tire.The tires’ tread pattern is very sporty and offers impressive traction. This combination enhances sporty riding as well as stability. We can attest the decision to fit a bigger front tire as this eliminated the twitchiness of the handling associated with smaller wheels especially during cornering and high speed blasts. In fact, we can even say that it feels so planted and stable during cornering that it feels like a much bigger bike. The big petal-type front disc brake that was activated by dual pistons not only looks fantastic, it also ensures impressive stopping power for the Jet 4 even though the rear is only a drum brake. Still, if you are going to ride the Jet 4 fast, you better know how to use the front brake well and not just the rear. The suspension is a bit sport (meaning hard) but it is an advantage when sporty riding especially during hard braking. The rear might only have a single shock absorber but it’s enough to make this sporty scooter handle well. For sure, comfort will improve with a passenger. 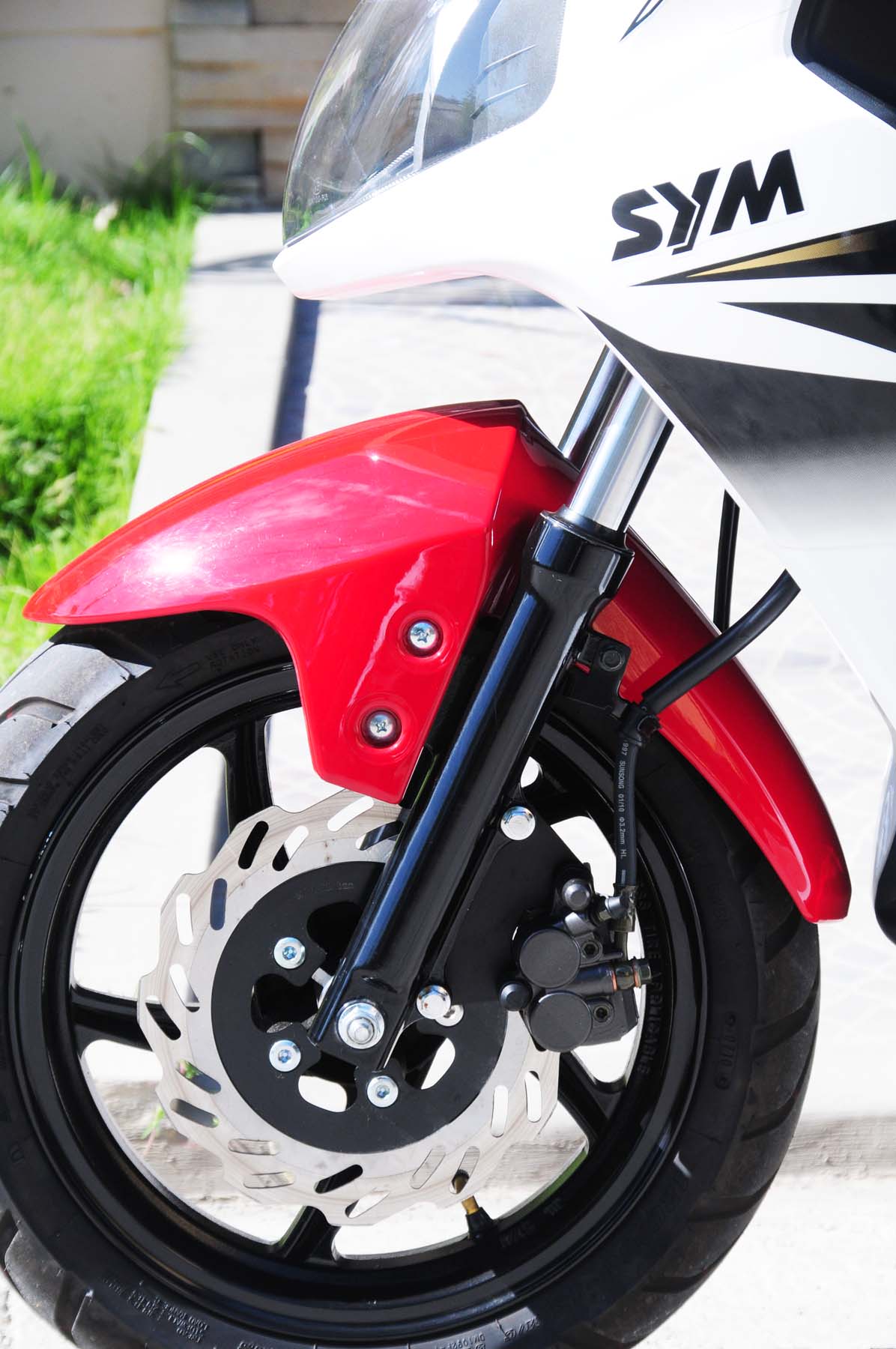 Riding around, the Jet 4’s attention-grabbing looks and traditional scooter qualities make commuting fun and easy, and its sporty handling in the twisties will provide some excitement to the owner. Moreover, the Jet’s 4-stroke engine brings the SYM Jet name into the mainstream scooter market once again and will surely make many loyal Jet riders happy for many years to come. Surely, there will be many new members joining the club as well as many old members renewing their love affair with the Jet. 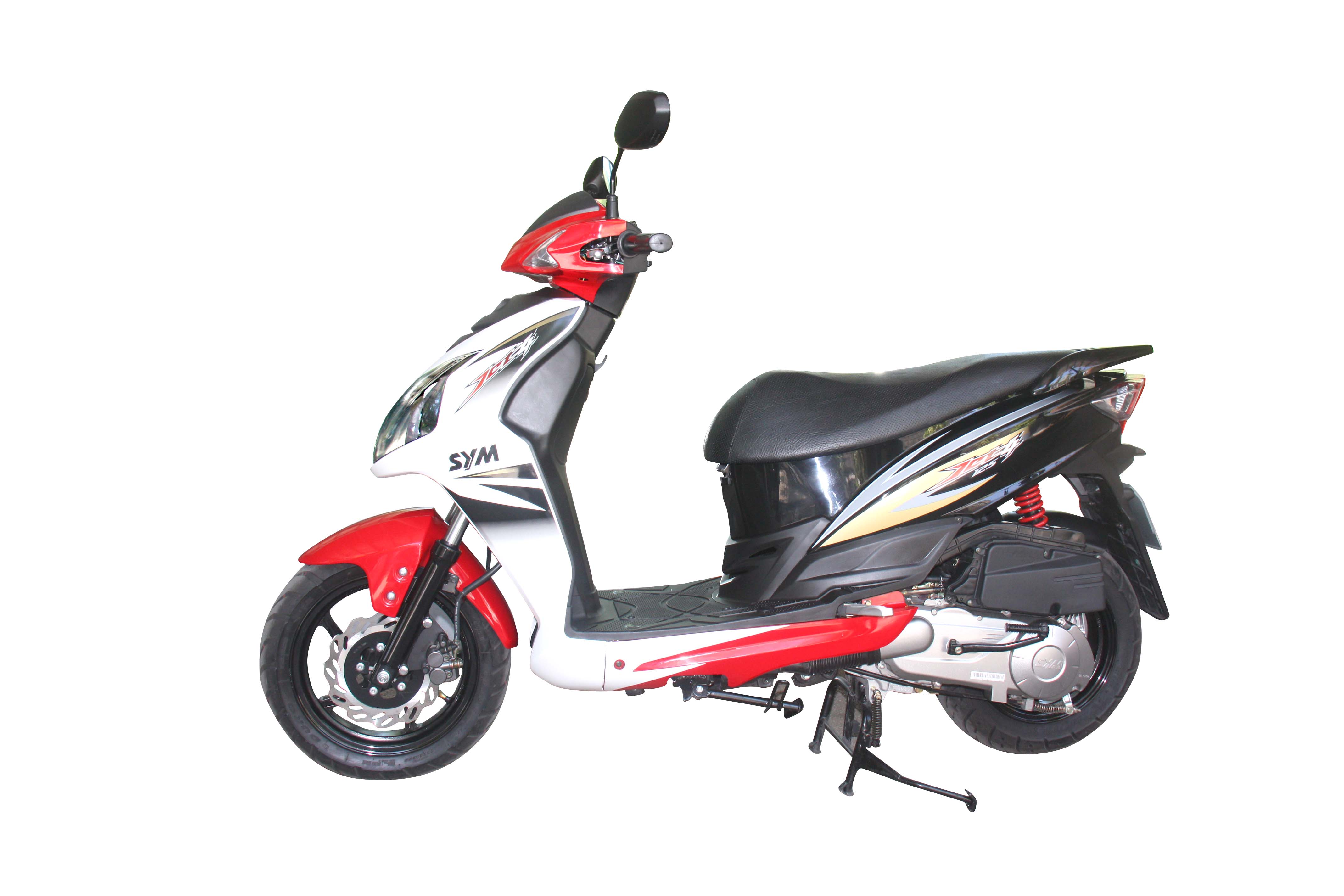 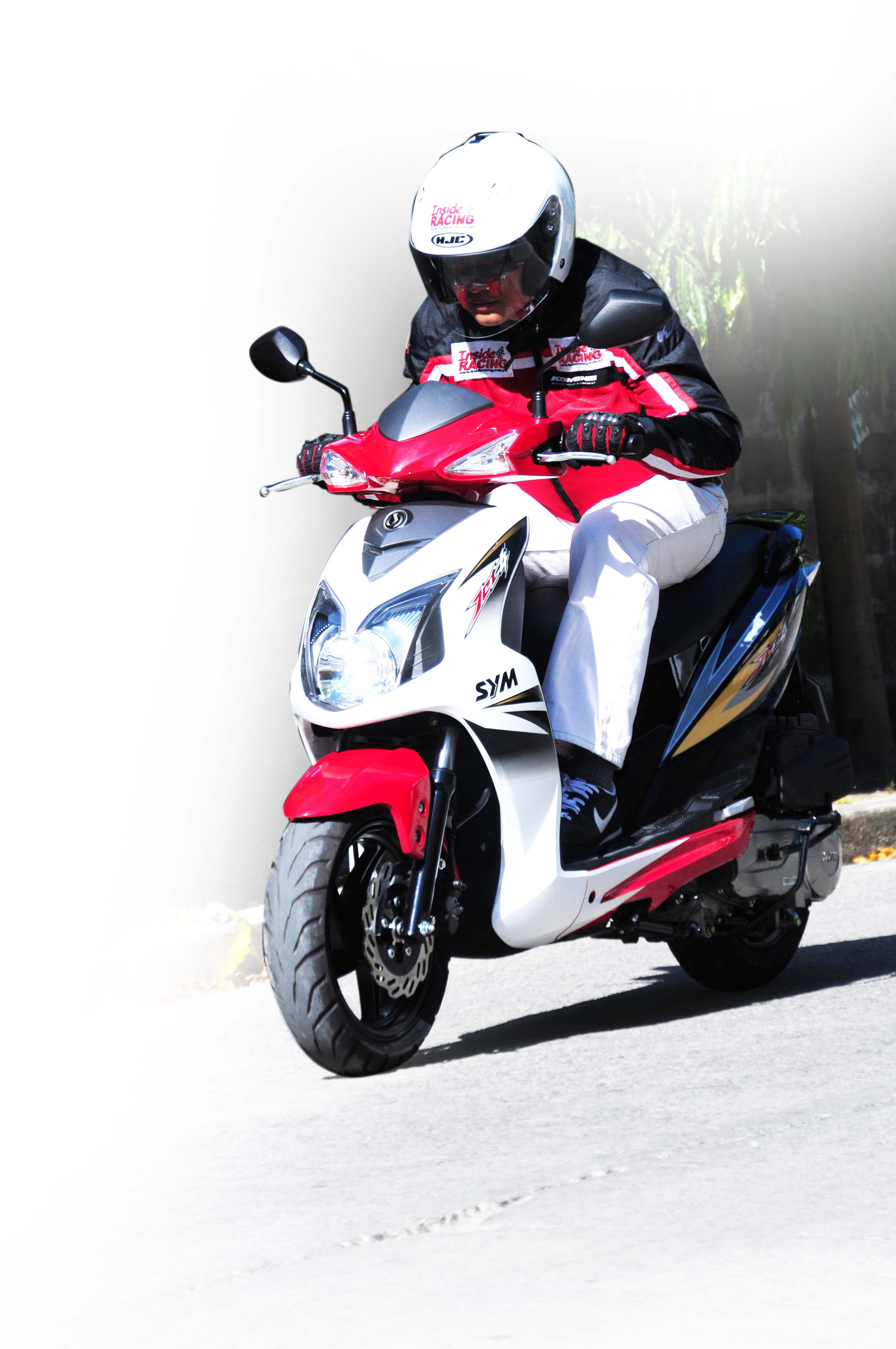 Al Camba “I remember when we restarted the magazine way back in 2004. One of the first clubs that approached us was the Jet Riders Club of the Philippines. Even then, they were already an established group with a big membership. That was a good indication of how well the SYM Jet has been accepted by local riders. Sadly, because of the decline in popularity and demand for 2-strokes, the Jet slowly faded through the years. With this new 4-stroke model, SYM has revived the fever for the Jet fans and many will surely upgrade or return to the SYM fold. I find the new Jet 4 very modern and sporty in appearance as well as in the riding characteristics. Despite having small wheels, it handles well and feels like a bigger bike during cornering with none of the small-wheel handling quirks of traditional scooters. The body graphic colors and the instrument panel are a huge leap from the old models, giving the new model a more upscale look. I am especially impressed with the security switch under the seat as well as the convenience of being able to open the seat compartment without removing the key from the ignition. The engine is smooth, delivers ample torque for brisk acceleration while still being more refined than any 2-stroke engine. For me, only the weak rear brake can be improved, otherwise, the whole package is hard to fault. Well done SYM for another value-for-money product and for bringing the Jet name back into the hearts of local enthusiasts.” 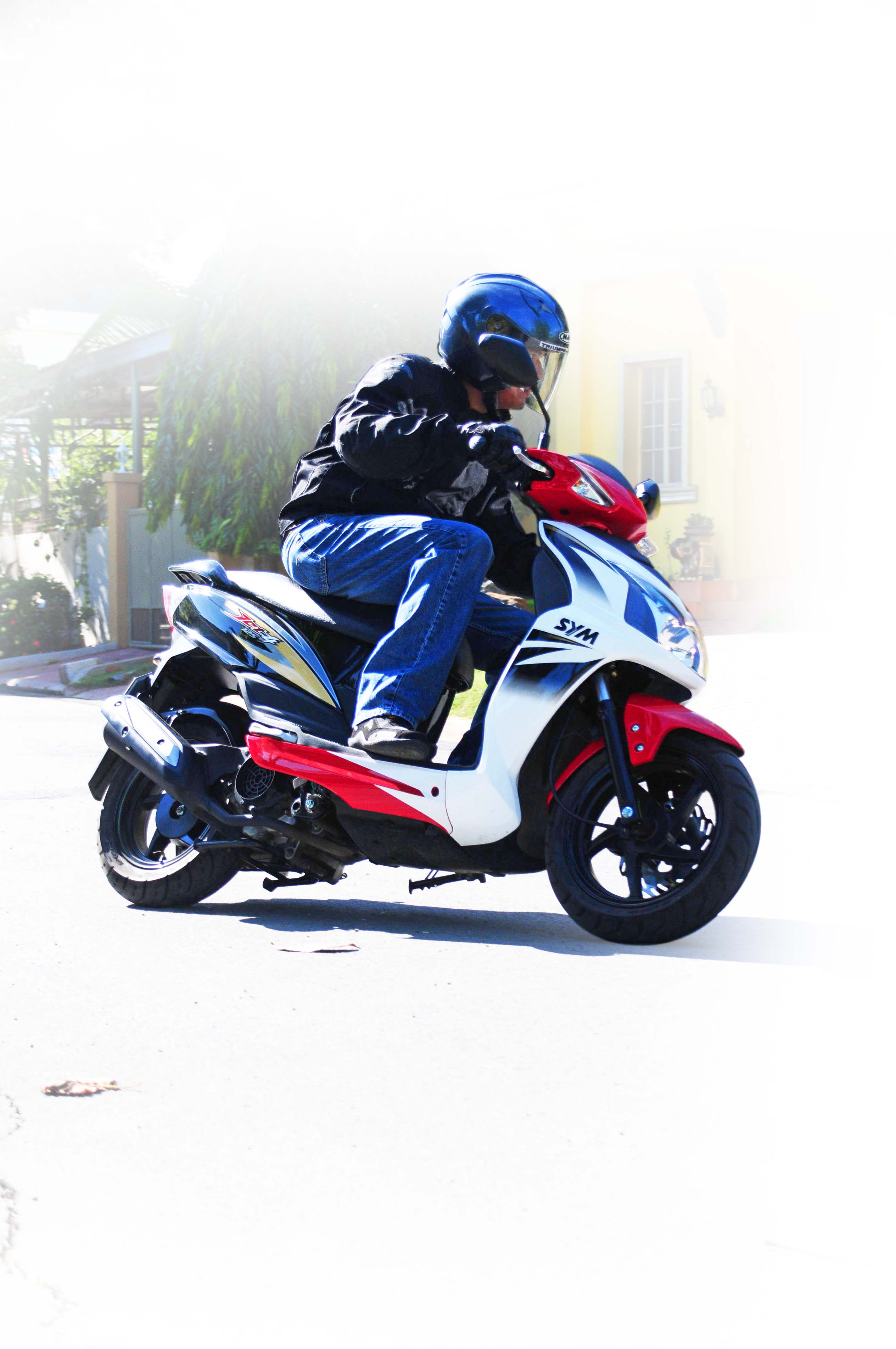 Philip Bonza “The Jet 4 125 is very sporty with a European look. The style and contour of the body is very sporty and the color combination is unique. The rear end of the scooter is solid black color with a combination of gold and silver that makes this Jet 4 sportier, plus the rear grab bar and the lights have a modern look that’s very stylish. The speedometer panel is unique and I like the blue LED light. Performance-wise, this bike has very good power. Top end power and low end power are very good for me. The performance of the brakes is superb, especially the front brake. The style of the front rotor looks like a mini disc of a cutting machine. For the rear brake, it’s a little disappointing because of its low performance compared to the front brake. The suspension is a little too hard for rough road conditions, but it is perfect for braking especially the front forks. For the riding position, the seat height is very comfortable for me; it feels like I’m riding a motorcycle and not a scooter. The floorboard is a little high but I feel comfortable especially at high speeds. Overall riding position is very good. Very good job by the engineers. Considering the styling and overall performance including the poor rear brake performance, I give this bike a close to a perfect score or a B+.” 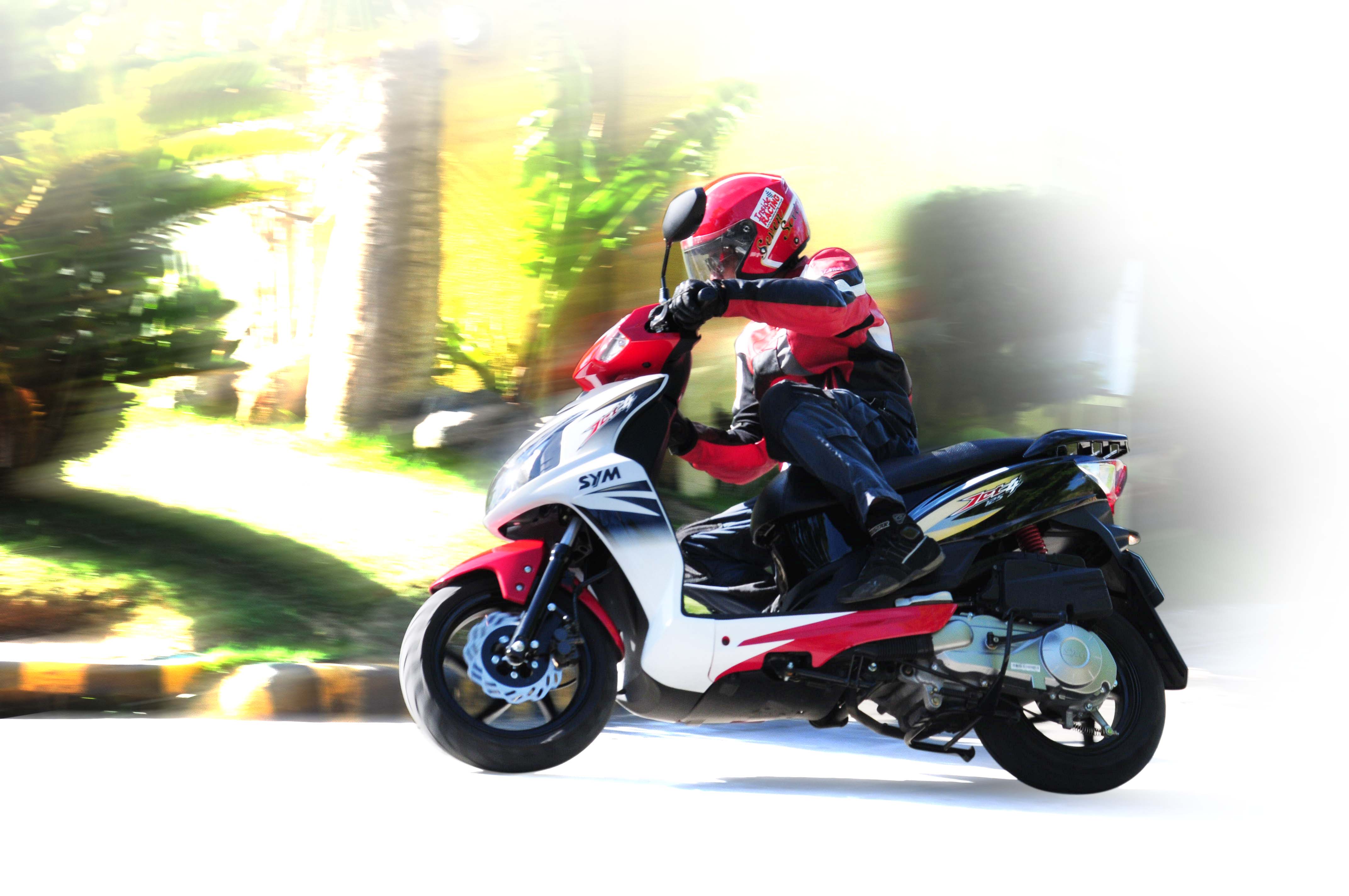 Ricci Abrina “The body graphics is very nice and distinct. It’s not plain but sophisticated. Unlike other low-priced scooters, this one has been thought of well. The design of the fender in the front is so unique. It looks bulky but I think it looks just right with the whole package. The speed and acceleration, I think, is very impressive. It is not so fast but it’s better than other stock scooters I’ve tried so far. I feel it is lacking in the suspension performance, maybe because it only has a single shock at the rear although it has bigger front forks compared to other scooters in its class. The brakes are good enough for its power. Even though the rear is drum-type, they are powerful enough to stop the bigger-sized scooters. I like the instrument panel; it’s modern and hi-tech because it’s partly digital and analog. The speedometer is analog but the fuel gauge is digital. I would also give this scooter an A for having a security button inside the seat compartment. It’s the first time I’ve seen this feature in a small scooter. SYM used good tires for the Jet 4. They don’t squeak much and they really stop the scooter once you apply the brakes. The Jet4 also has a big space under the seat as well as a small compartment in the front, and that’s a plus for this kind of scooter. The power is not that great in terms of acceleration, but in the midrange, it is strong enough for a 125. The footpegs are so nice because they can be concealed within the body. To open the seat you can use the key in front. You don’t have to pick up a key so that’s a plus.”

*This article was published in InsideRACING’s  Volume 8 Number 5  2010 issue. 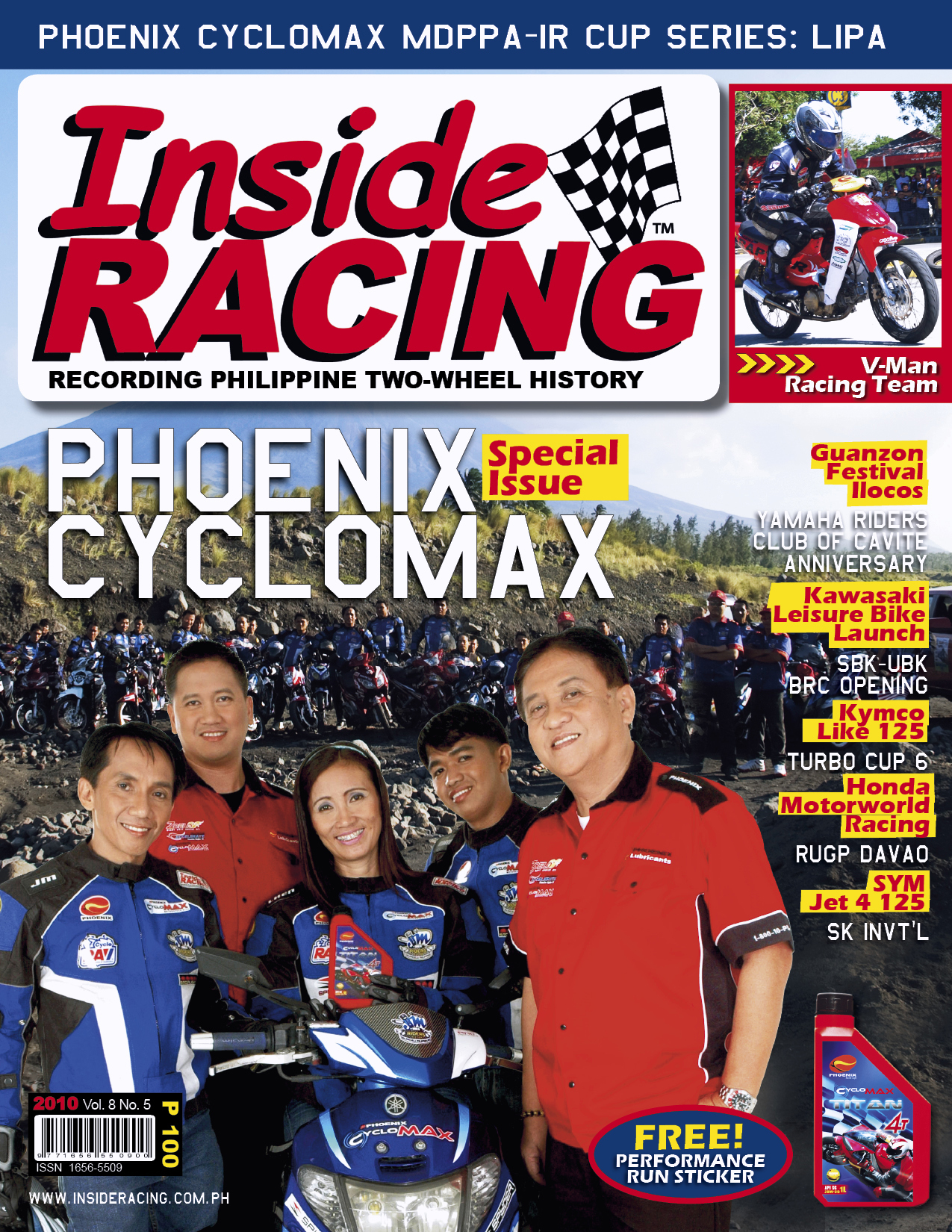