TEAM SUZUKI PILIPINAS ALL SET FOR THE SUZUKI ASIAN CHALLENGE AT THE ARRC! 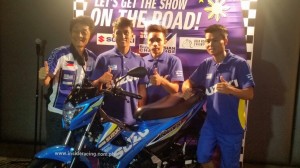 Following the positive results of the Official Test in Sepang, Malaysia, Team Suzuki Pilipinas is all ready for the Round 1 of the Suzuki Asian Challenge at the Asia Road Racing Championship (ARRC) set to happen this weekend – April 17 to 19. 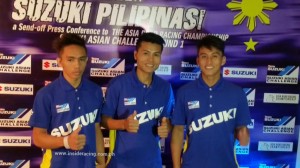 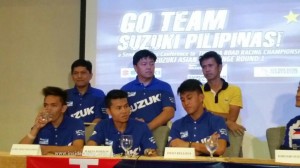 Composed of powercast personalities in the motorcycle racing scene as their companions to the event – Mr. Yoyong Buncio of the YRS Racing Team, Mr. Bobby Mencias of the BMR Racing Team and Mr. Rico Cagnaan of VMAN Racing Team, the team is confident that they are able to make the country proud in the games. Committed to give it their all, Rellosa, Borbon and Mascardo did not waste time and burned tyres as they trained hard days before the games at the Batangas Racing Circuit guided by Suzuki Philippines Racing Head Noel Villapando.

The nation’s delegation to the highly anticipated competition in the region will leave for Malaysia on Thursday, April 16 where the first round of the 5-leg series will be held. The team will be seen competing with other 14 Suzuki racers from Indonesia, Japan, Malaysia, Philippines, Singapore, Sri Lanka, Thailand and Vietnam. 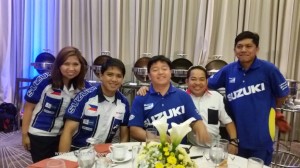 The Suzuki Asian Challenge is an event at the ARRC with a single-make competition using the Raider R150 that also aims to discover talents who will be part of Suzuki’s development program to hone riders who will soon be competing in higher categories of the games and eventually the MotoGP. This program is alongside Suzuki’s imminent return in MotoGP with its new machine GSX-RR.