The eleventh edition of the World Ducati Week, which after a four-year absence returned to bring together Ducatisti and fans of the world of two wheels for three days of passion, fun and unforgettable experiences at Misano World Circuit “Marco Simoncelli”, has officially come to an end. 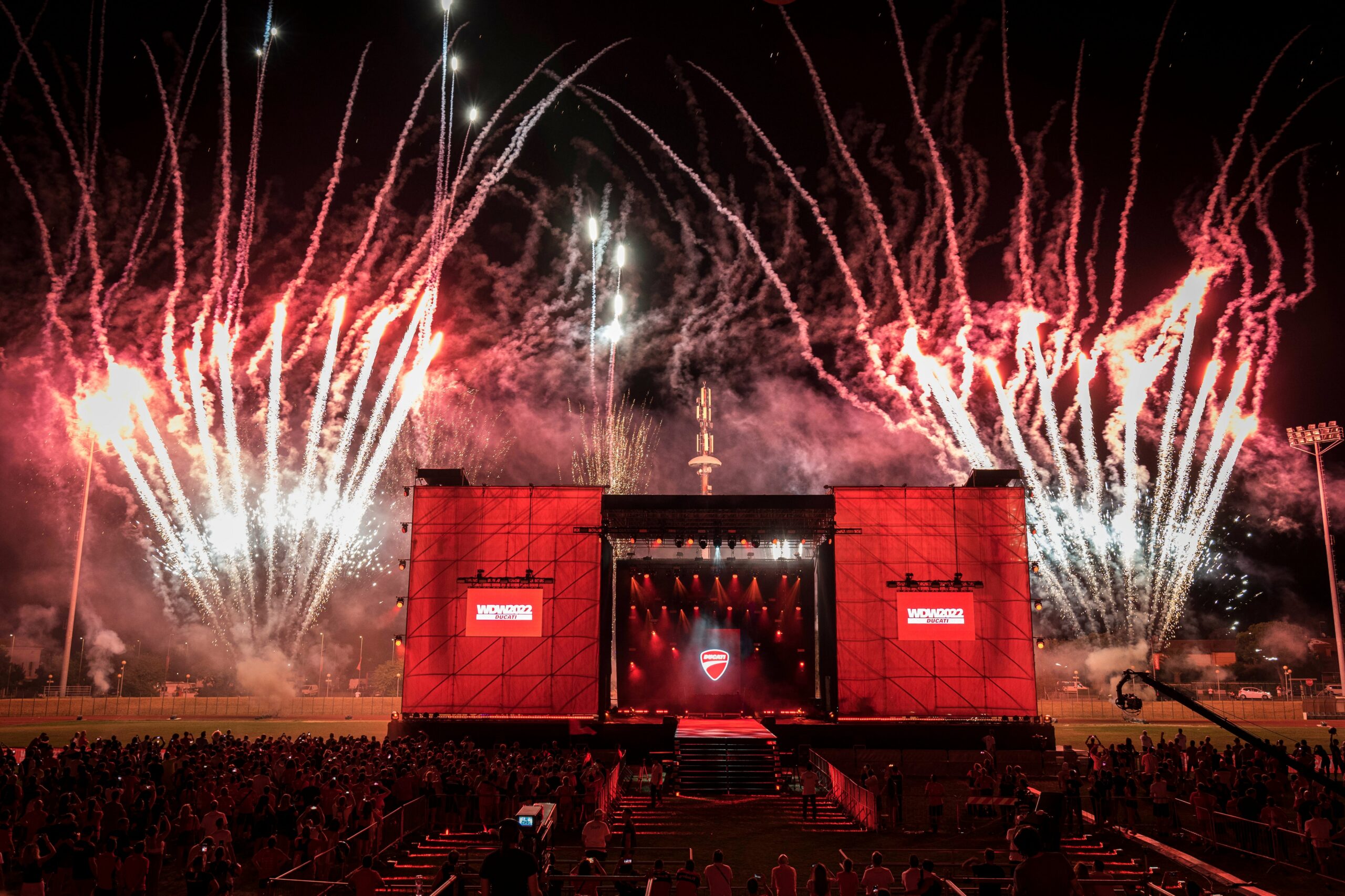 The passion for the brand and the desire to be present at the great Ducati gathering attracted many fans to Misano who, despite the difficulties in moving around and travelling that still characterize today’s scenario, as well as the pandemic and the extraordinarily hot temperatures of this period, crowded the paddock reaching 80,000 visitors over the three days. The participants came from 84 countries, demonstrating the global dimension of Ducati and the appeal that the brand has on motorcyclists all over the world. 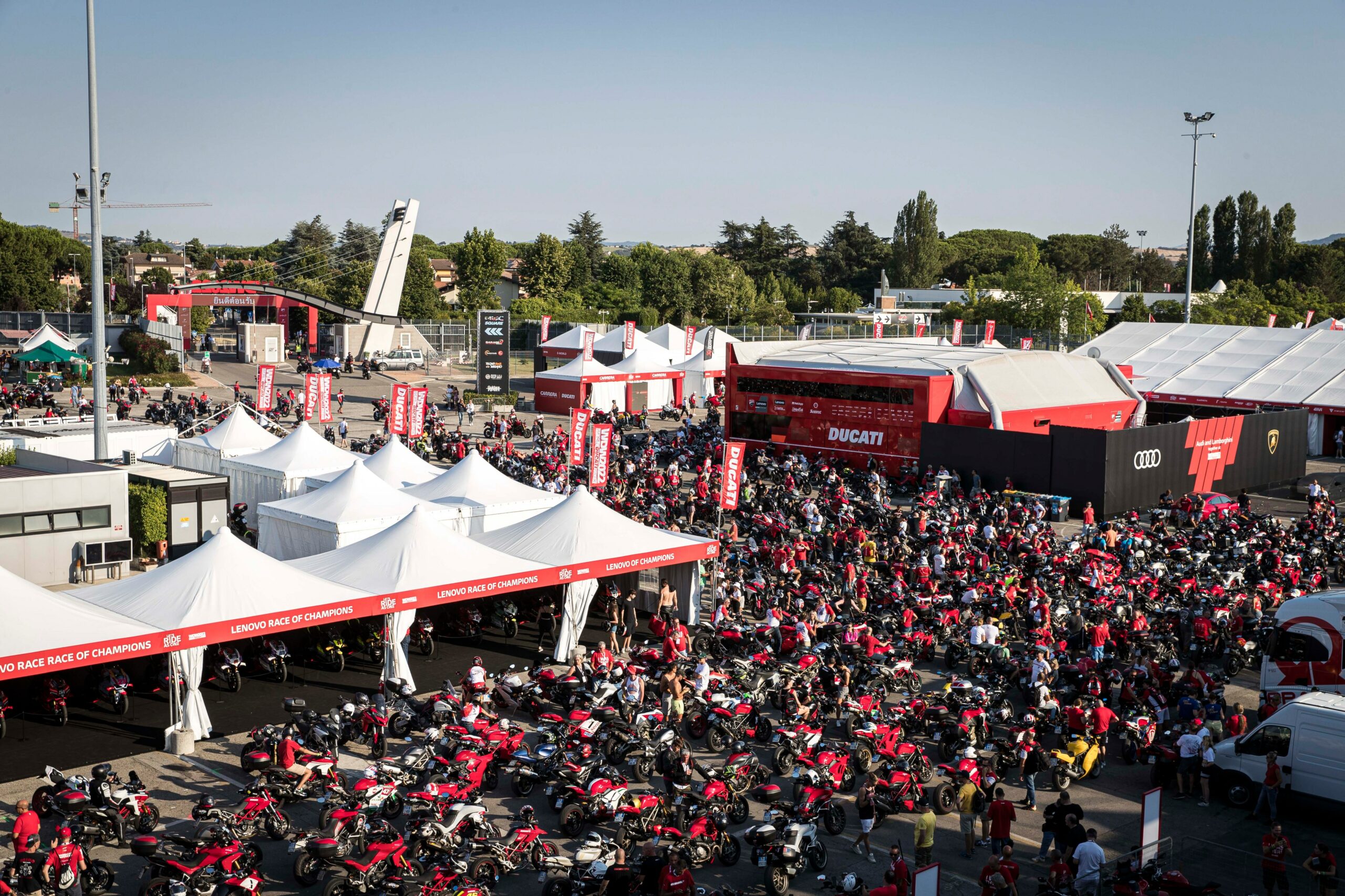 The main protagonists of the three days were the 235 Ducati Official Clubs present at the event, which animated the area of ​​the International Village dedicated to them together with all the Ducati subsidiaries. 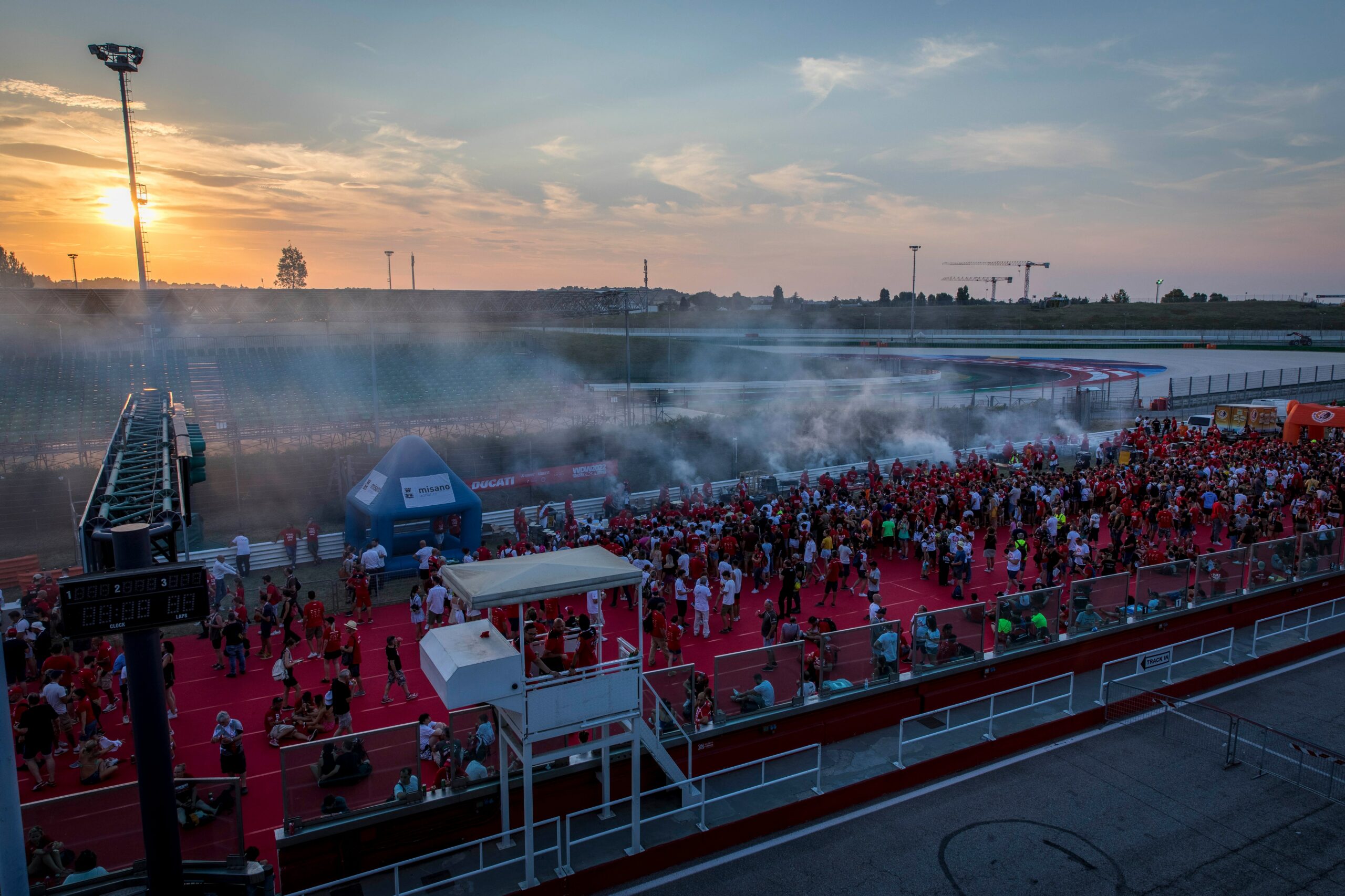 The success of World Ducati Week was also digital: in the three days of the event, over 6 million impressions were generated on Ducati’s social media channels. 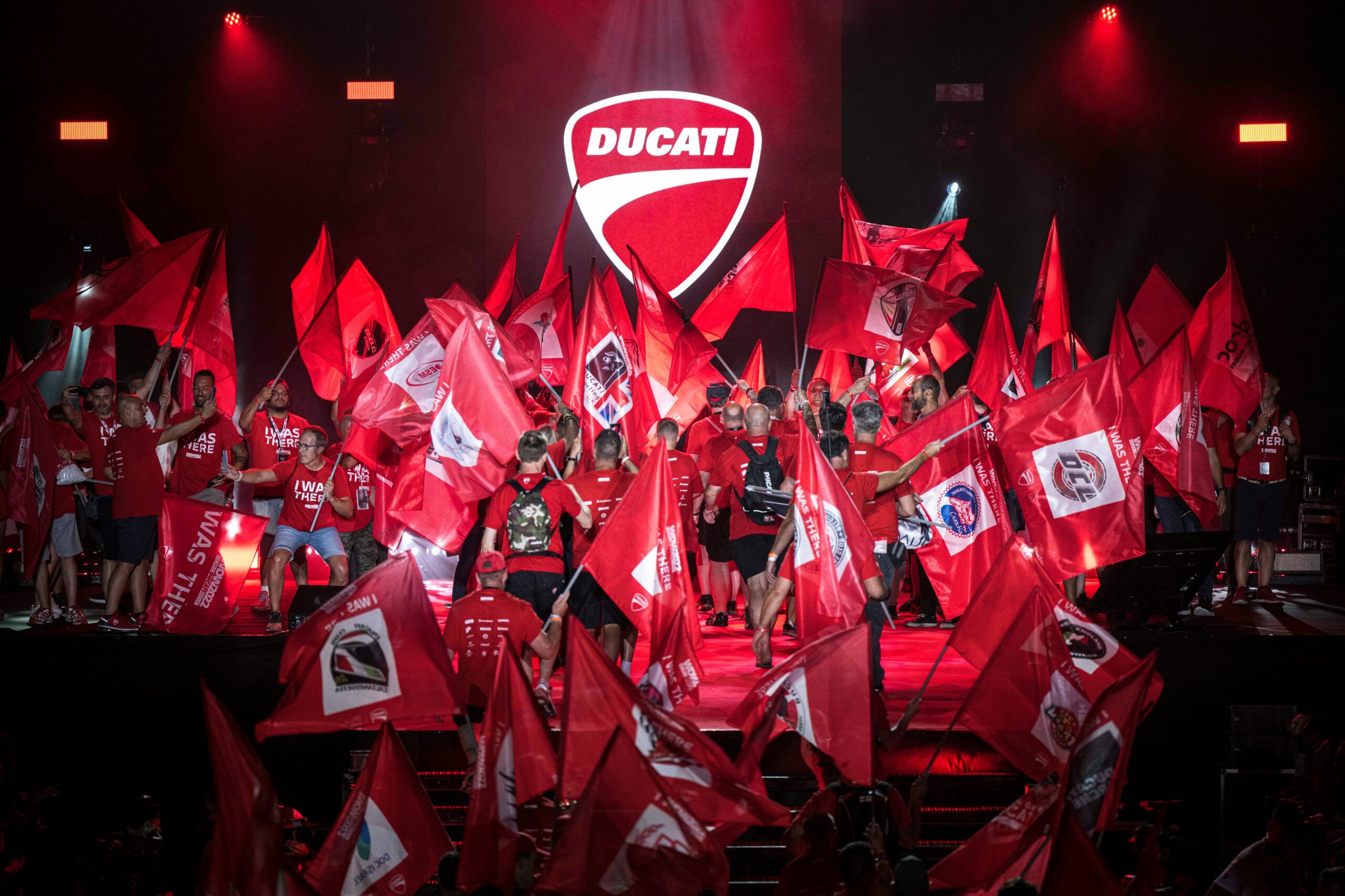 “At World Ducati Week we can experience the celebration of Ducati’s deepest soul: we do not merely sell motorcycles but we design experiences and emotions with bikes at the centre for our fans – declared Claudio Domenicali, Ducati CEO. He shared, “We all wanted to go back to being together with the Ducatisti and they arrived in massive numbers, as usual, from all over the world, even though we are still in the presence of travel restrictions and therefore we were not able to welcome anyone from China for example. Once again we were able to touch the great passion for Ducati and the desire to meet again, the happiness of the Ducatisti to be with us in Misano, the courtesy and kindness of everyone. The big parade on Friday, the crazy Lenovo Race of Champions, the Rustida on the pit straight, the greetings of the riders at the Misano stadium, the musical evenings, a fireworks show in time with the music that really impressed and excited me are just some of the moments that will remain in the memory of each person who came to this 2022 edition. I want to thank all the participants but also all the staff made up mainly of Ducati employees who, as usual, were present in great strength and worked hard to make this incredible experience possible. Thanks also to all of Ducati Corse and in particular to the riders, the heroes of the WDW, who, as usual, were available and close to all the fans, and who gave us a unique show in the world like the Lenovo Race of Champions.”

The most keenly awaited moment was certainly the Lenovo Race of Champions starring 21 Ducati riders competing in the MotoGP, Superbike and Supersport championships, who fought it out on standard Panigale V4 S and Panigale V2 bikes, equipped only with slick tyres and racing exhausts. A unique show that only Ducati can offer its fans, which saw Pecco Bagnaia triumph after also setting the fastest lap in 1m35.886s, only 2 and a half seconds more than the time from this year’s Superbike pole position at Misano. Federico Caricasulo instead took the victory in the Panigale V2 category. 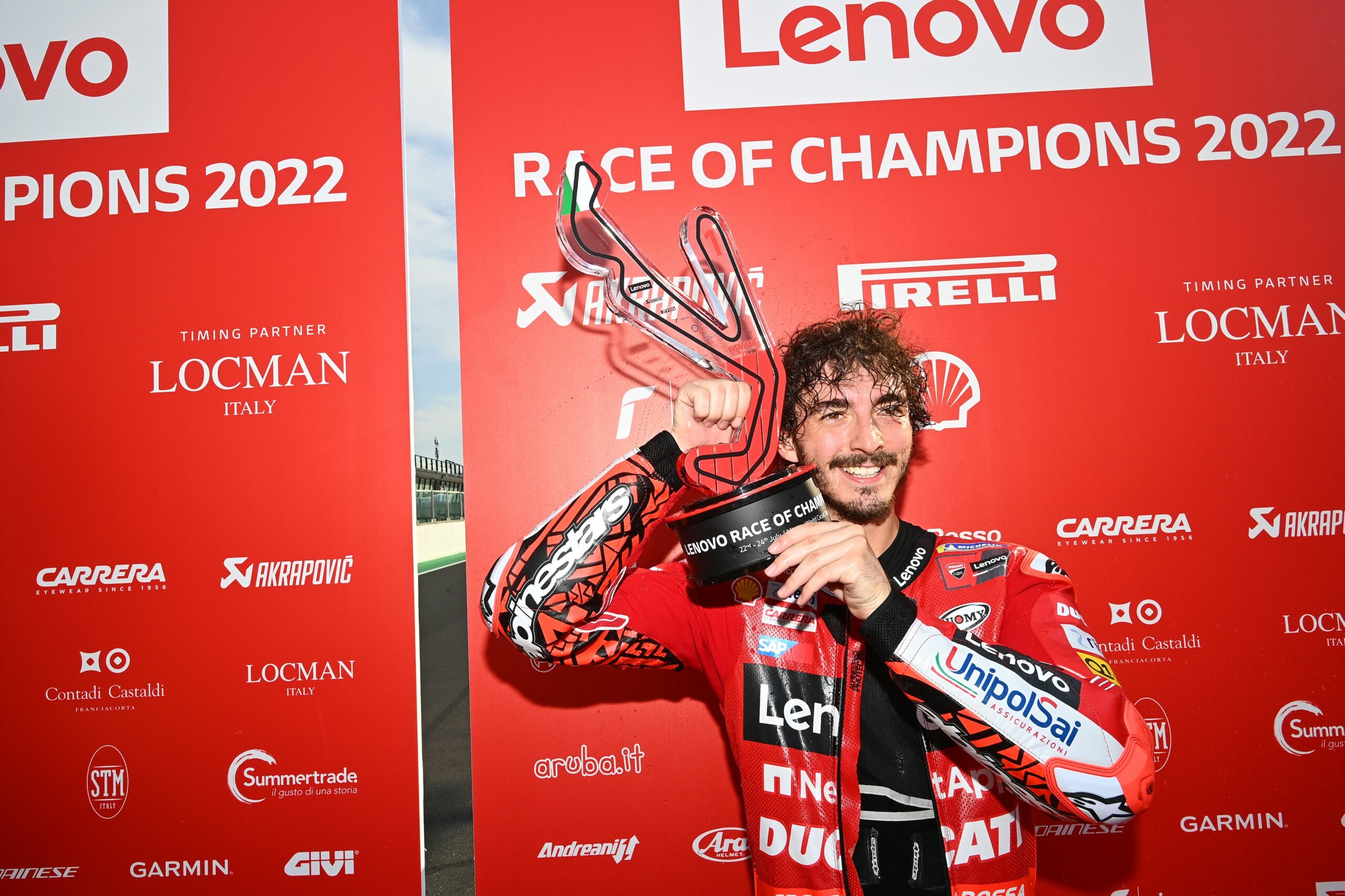 Many fans followed the race from the Misano stands, giving rise to some extraordinary cheering. They were joined by tens of thousands of spectators who connected from home to the live streaming on the Ducati website. But not only that: as many as 9 international televisions and online streaming services broadcast the race live in their schedule, making the Lenovo Race of Champions a truly international event. In Italy, the race was broadcast on the Sky Sport MotoGP channel with the commentary of Guido Meda and Mauro Sanchini and the contribution of Sandro Donato Grosso from the starting grid. 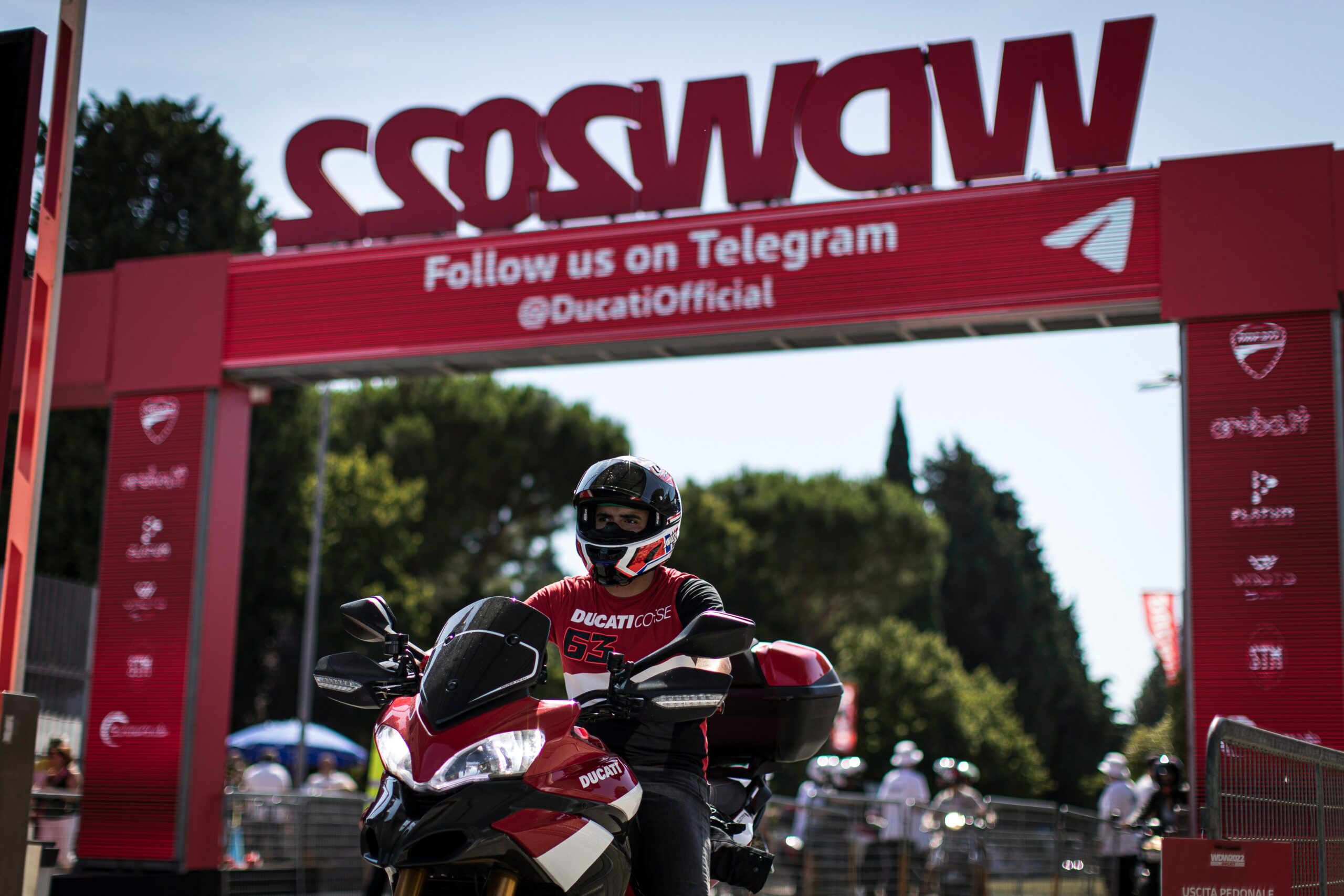 The autographed motorcycles of the Lenovo Race of Champions, unique pieces in racing configuration, characterized by the riders’ liveries and the triple clamp bearing a lasered logo of the rider’s name, will be on sale online for a selection of Ducati’s best and most enthusiastic customers globally, who will be able to access a timed online sale, before the possibility of purchase is open to everyone. The e-commerce site dedicated to this special project was created in collaboration with Drop E-business & love, one of the leading operators in the supply of e-business services. 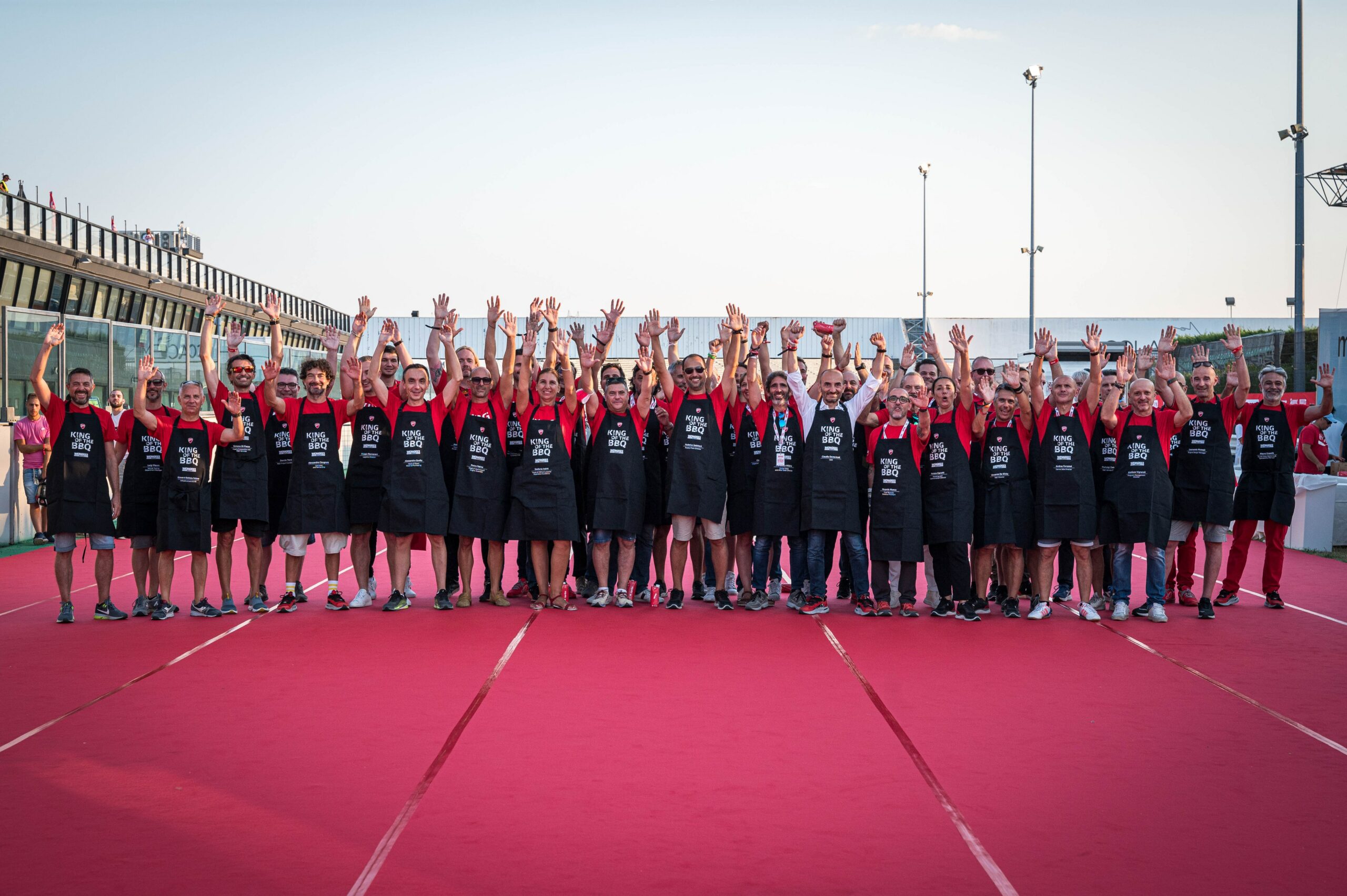 Enormous success also for FantaWDW, which allowed the fans to have fun creating their own team of riders on which to make a prediction of victory for the Lenovo Race of Champions. In all, there were more than 18,000 accesses to the web-app in the three days. The parade of Ducatisti on Friday evening will remain as one of the most memorable moments of this eleventh edition of the WDW. The biggest parade ever saw a massive number of bikes that first filled the circuit and then paraded along the coast before arriving in Riccione, where the Scrambler Beach Party was held to the music of Benny Benassi. At the head of the ‘Big Red Snake’ was Claudio Domenicali with MotoGP and Superbike riders, the authorities and Ducati management. On Saturday evening, however, the pit straight of the Misano circuit was transformed to welcome the Rustida typical BBQ, this year enriched by a special recipe created by Chef Riccardo Monco of the three-star Michelin restaurant Enoteca Pinchiorri. Immediately after, on the large stage set up for the occasion in the Santamonica Municipal Stadium in Misano, all the riders who took part in the WDW greeted the fans, excitedly telling how they experienced the Lenovo Race of Champions and what it means for them to be true Ducatisti. The evening ended with a DJ set from Meduza and an incredible fireworks display to the sound of music that left everyone amazed. Ducati is pleased to confirm that part of the contribution requested from participants for the use of the gear and helmet deposit inside the paddock will be donated to the Casa delle Donne of Bologna, a women’s association and an anti-violence centre committed to combating all forms of gender-based violence, promoting activities related to cultural change, awareness raising and prevention of the phenomenon of violence against women and children. 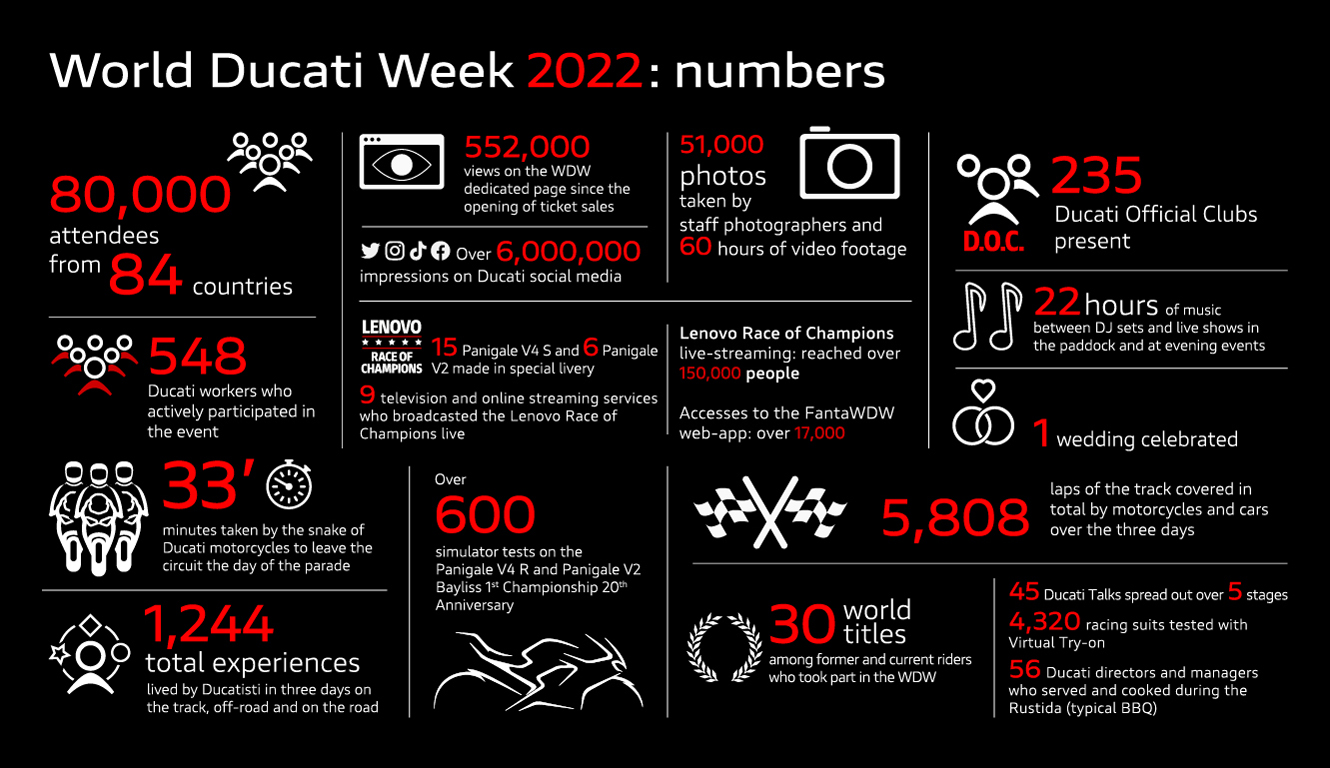 Here are the numbers of World Ducati Week 2022:

5,805 laps of the track covered in total by motorcycles and cars over the three days
51,000 photos taken by staff photographers and 60 hours of video footage
84 nations represented by the participants
235 Ducati Official Clubs present
30 the number of world titles of the past and current riders who took part in the WDW
15 Panigale V4 S and 6 Panigale V2 made in special livery
33 minutes the time it took the snake of Ducati motorcycles to exit the Misano World Circuit “Marco Simoncelli” to form the motorcycle parade for Riccione
1,244 experiences lived by Ducatisti in three days on the track, off-road and on the road
600 simulator tests on the Panigale V4 R and Panigale V2 Bayliss 1st Championship 20th Anniversary
4,320 leathers tested with virtual try-on
45 Ducati Talks spread out over 5 stages
102 “mechanics graduates” participants at Monta Smonta
1 wedding celebrated by Paolo Ciabatti and 1 wedding vows made at WDW2022
22 hours of music between DJ sets and live shows in the paddock and at evening events
548 Ducati workers actively participated in the event
9 international television and online streaming services broadcast the Lenovo Race of Champions live on their schedule
56 are the Ducati directors and managers from Borgo Panigale and Ducati subsidiaries around the world who served and cooked during the Rustida (typical BBQ)

552,000 page views on the Ducati website page dedicated to WDW since the opening of ticket sales
Over 6 million impressions on Ducati social media
Over 18,000 accesses to the FantaWDW web-app in the three days of the event
More than 150,000 viewers connected to the live-streaming of the Lenovo Race of Champions on Ducati’s YouTube channel and MotoGP Facebook page