The bike is owned by Drew Paraguya from the City of Golden Friendship, Cagayande Oro. 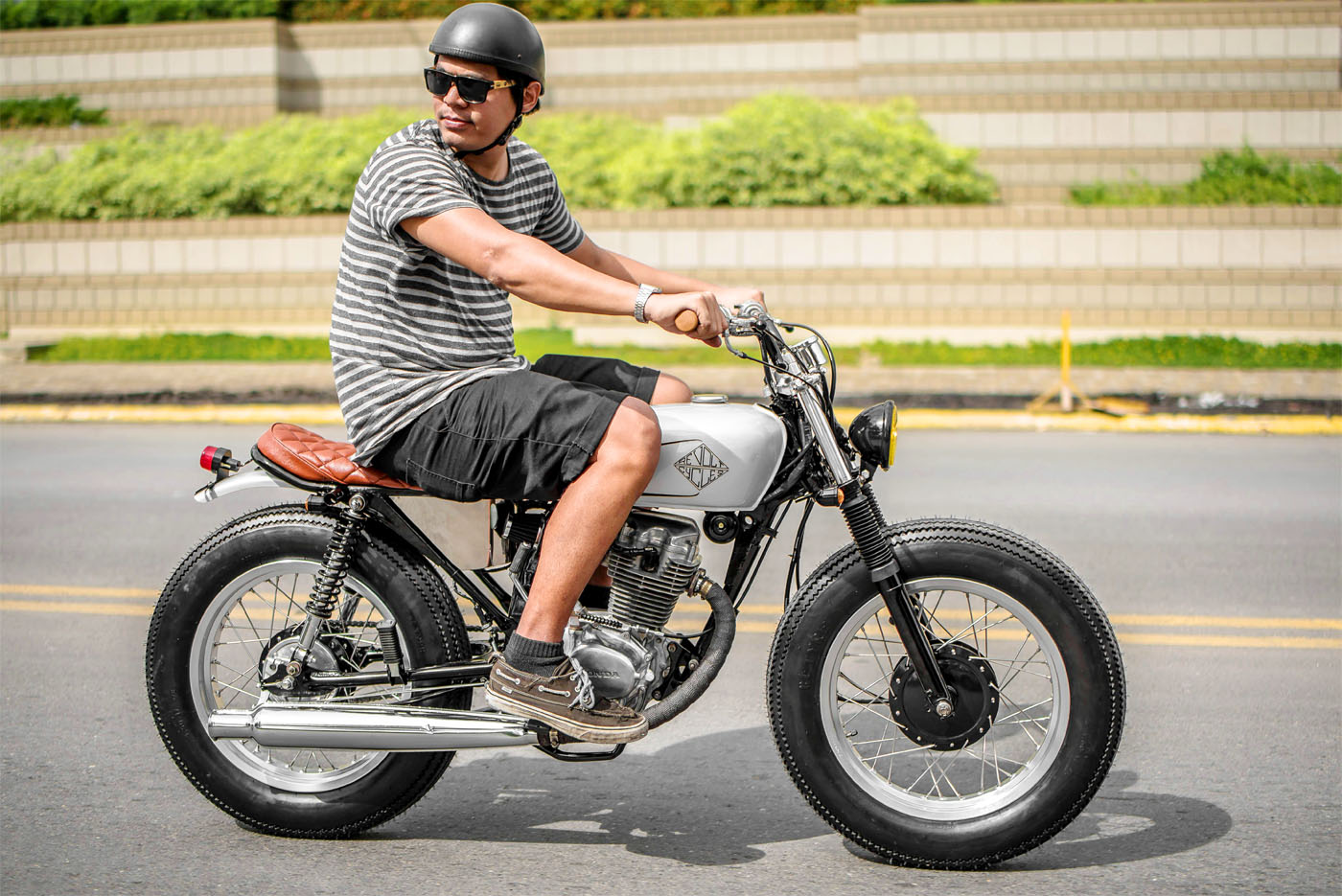 The bike sports a non-rigid mildly modified frame. The stance was slightly lowered, then most of the original components of the bike was taken out. It was stripped down to the bare minimum and only themost essential components were left.

The bike isdubbed as the “Silver Surfer” as it was built with the Surfer/Skateboarder in mind and is equipped witha detachable surf/skateboard/long board rack.

The team at Revolt Cycles decided to make the Honda TMX as the base bike because of its tried and tested reliability and powerful engine. Aside from that, the bike is very easy to maintain as parts are readily available locally due to the bike’s popularity as a mode of public transport such as a tricycle, habal-habal, or delivery bike. 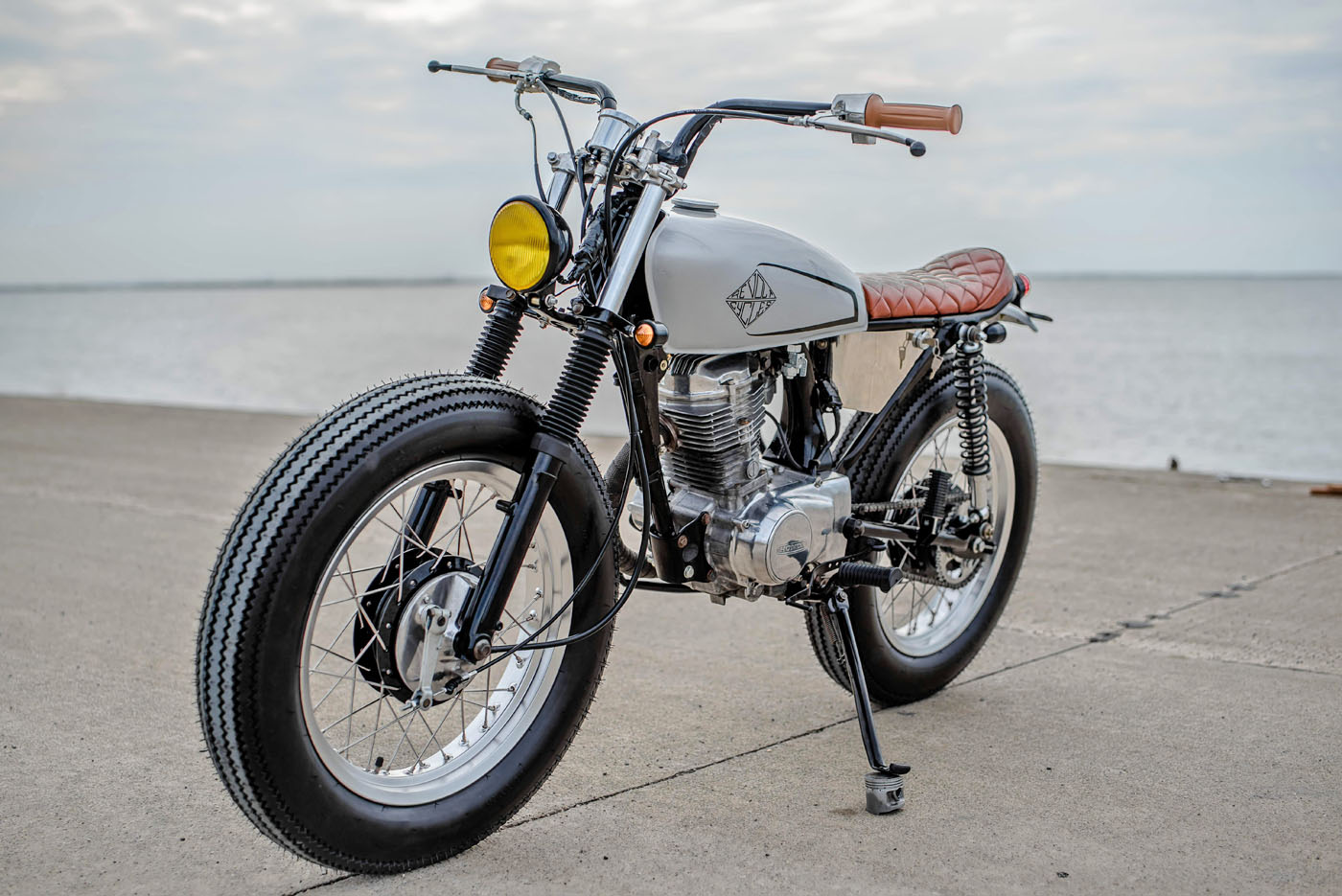 “It is also a great benefit for the client as he can access all of that locally for those regular maintenance and checkups. We want most of our customers or clients to be in the direction,” Mr. Jon Kevin Yu of Revolt Cycle said during an interview. “The build is a brat style setup good for a 2-person capacity. We made sure to have those big fat classic tread tires installed as it bring out the best with its design and looks, but we had trials and errors in getting to that as we had to realign the rims several times, take out the tires andreinstall them to make sure they are centered and aligned in the middle of the bike. We also made a custom “mustache” handlebars which we made twice as the first one got ruined when the bike accidentally fell during mockup. We also did a stainless steel battery box/tray, fabricated a detachable surfboard/skateboard rack as requested byDrew and that sweet-looking original Honda CB125 tail pipe. This project took us 2 1/2 months to build as we had the engine rebuilt and all the other parts dismantled, checked, repaired and replaced. The most challenging part for this build project might be the handlebar and fitting the muffler. For the handlebar we had to make sure itwas aligned properly and get the right height and width considering it was our first time fabricating a handlebar. For the muffler we had to fabricate a new bracket to mount on the bike. The tricky part was the kick start. We tested 6 different kinds of kick starts so that it will not hit the muffler,” Mr. Juan Yu shared. The parts used on the bike are all carried and sold by Revolt Cycles.

You can check their Facebook Page. It’s a great start for any classic bike build project such as Brats, Scramblers and Café Racer projects. They carry parts such as custom stoplights, bullet signal lights, classic pattern RT tires and custom leather seats. They also fabricate made to order parts such as handlebars and mufflers. They also fabricate stainless steel components for battery/electrical box enclosures and other special request components such as carry racks for luggage, surfboards, skateboards, and downhill long boards.

Mr. Jon Kevin Yu has this message to close our interview, “First and foremost thank you to God for all the blessings. Special thanks to Drew Paraguyafor trusting us to work on his bike, to “The Jeb” RJ Ouano for the awesome photos, to the people behind the build, to our supporters, friends and especially to our family and the growing RVLT family. Thank you also to Mr. Al Camba and Mr. Arnel Santos-Yñigo for the opportunity to be featured in InsideRacing Magazine”.