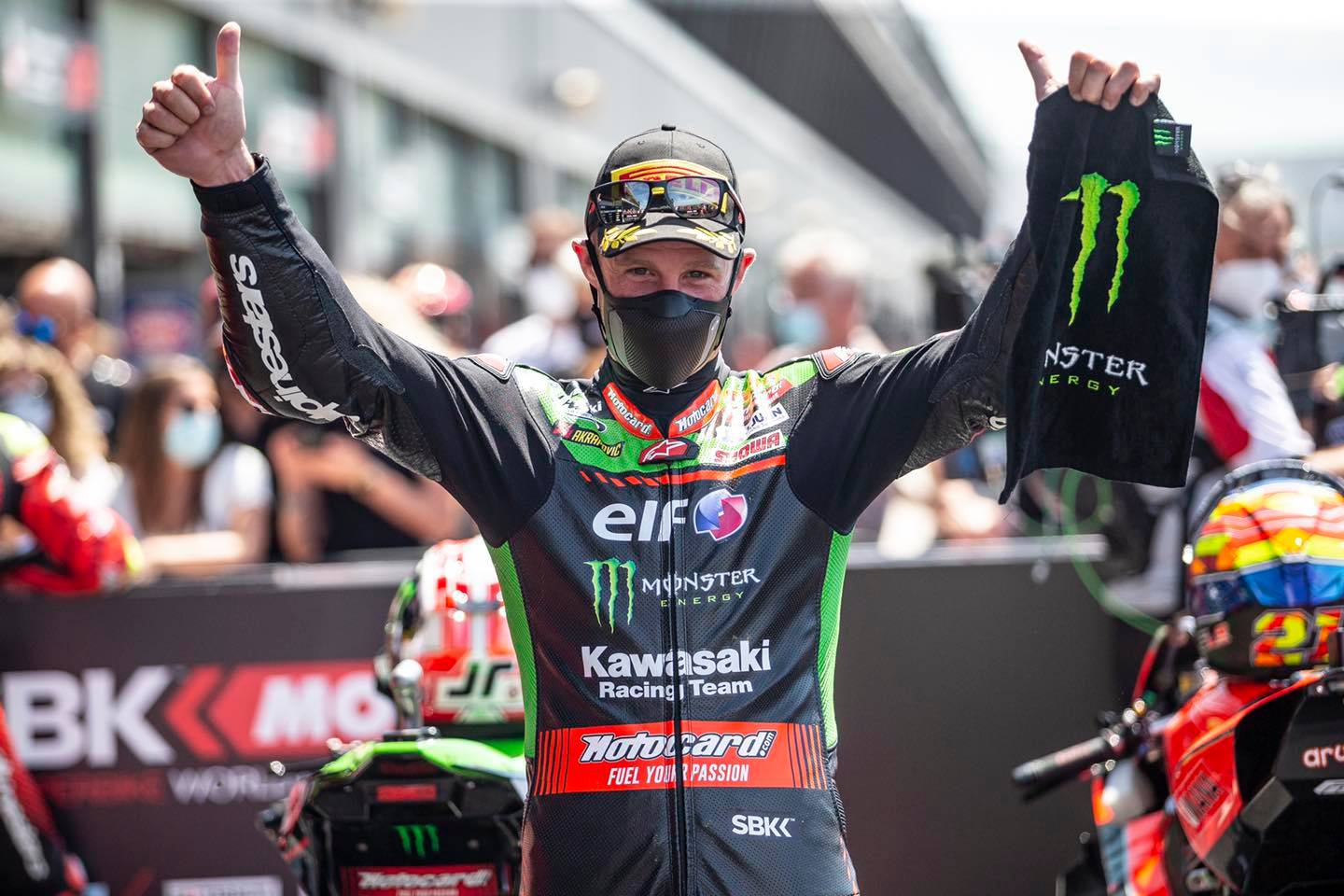 Jonathan Rea was the poleman in Misano while Alex Lowes started at the second row in Race 1 of the Pirelli Made in Italy Emilia-Romagna round of the World Superbike Championship. 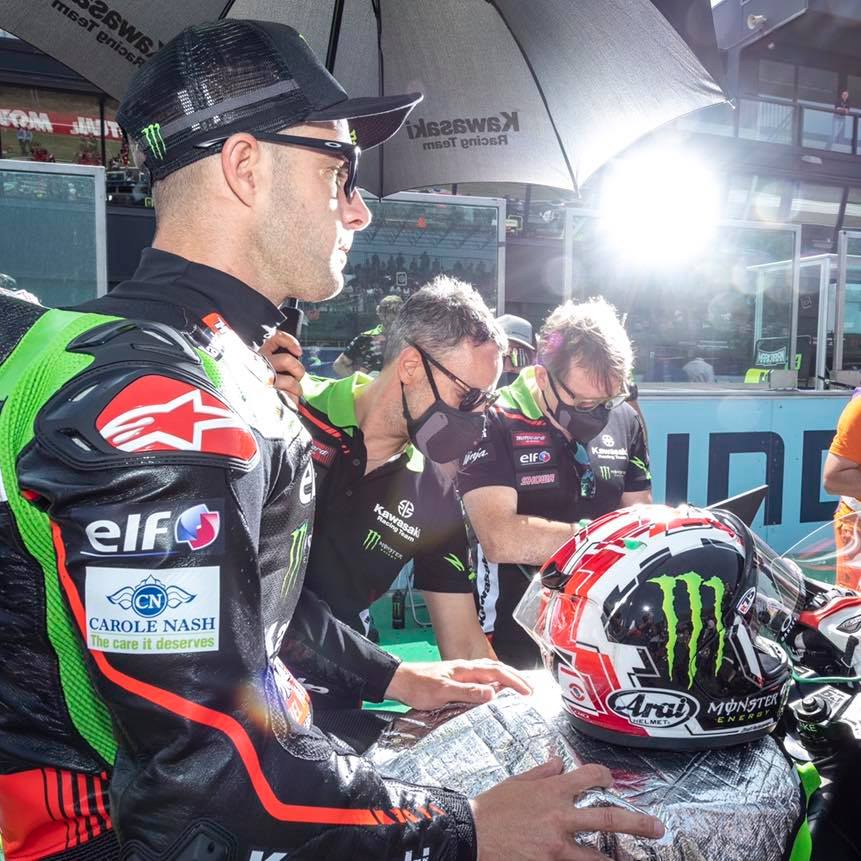 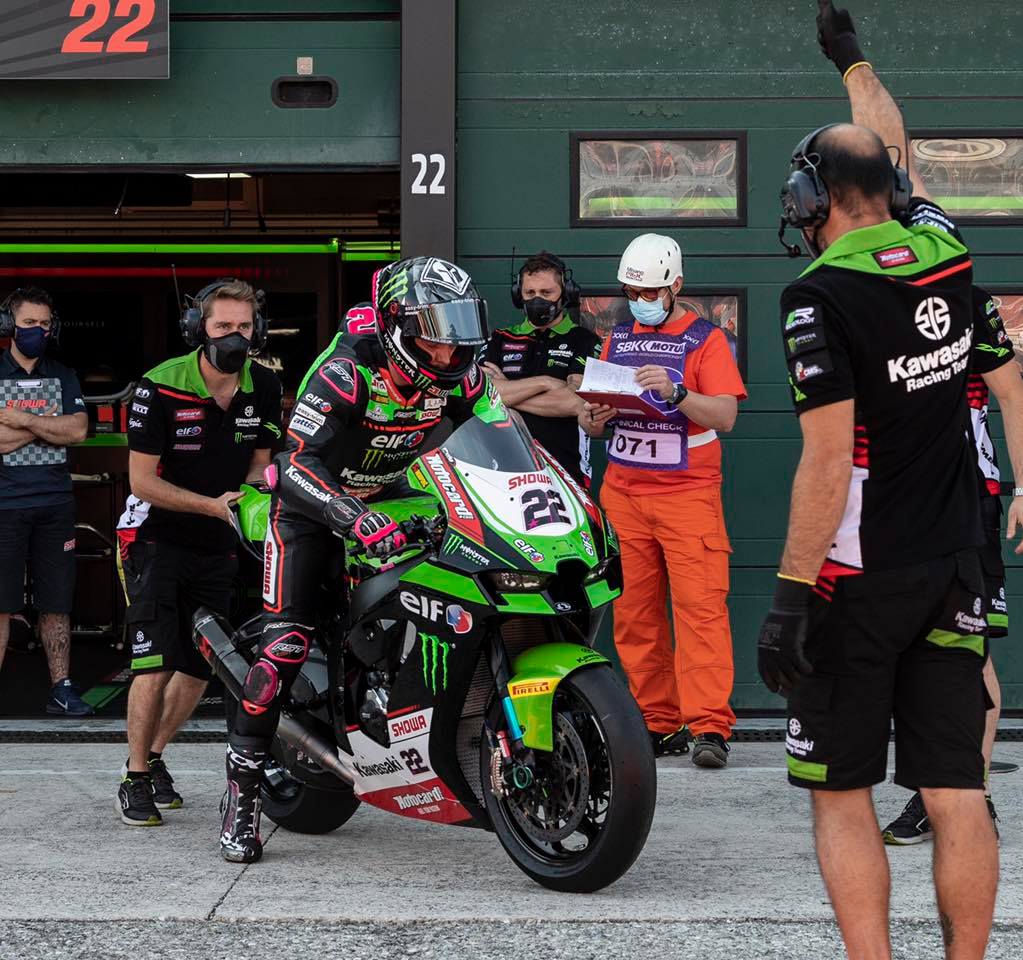 KRT rider Jonathan Rea secured his seventh podium in succession with a third place in Race 1  (150th Kawasaki WorldSBK podium visit).  Earlier in the day, Rea had taken his third Superpole win of the season, again at record pace, with a 1’33.416 lap time. This success gave him another landmark in his stellar WorldSBK career – 30 Superpole wins in all. Alex Lowes finished fifth. 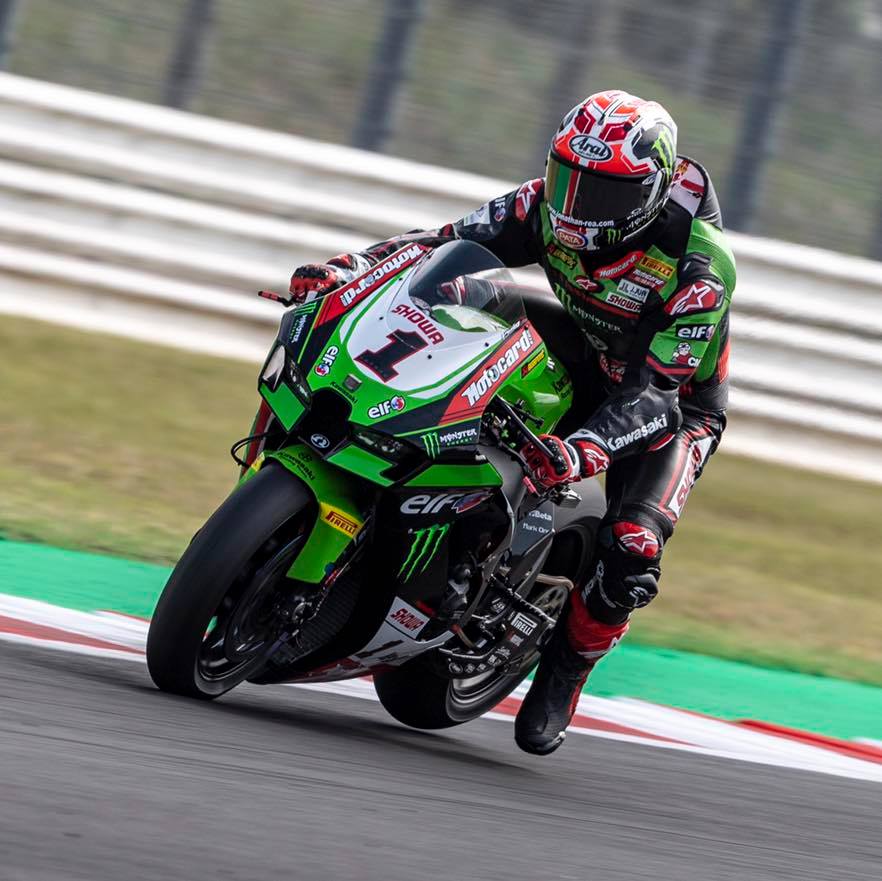 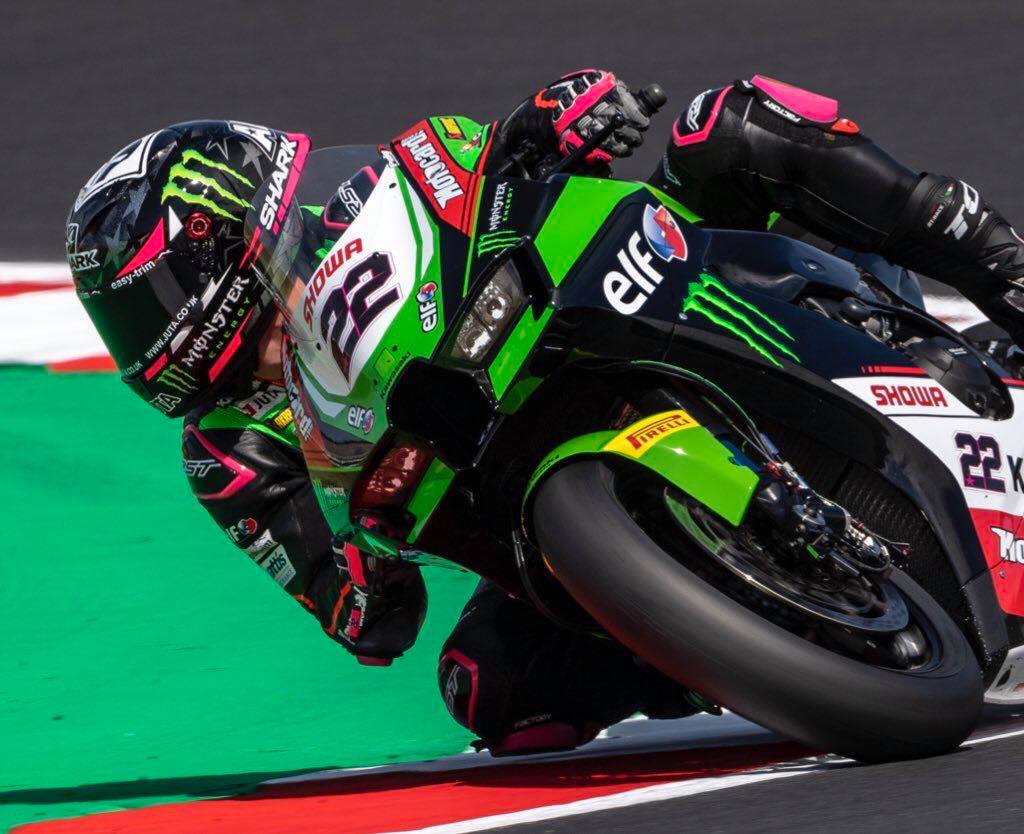 Alex Lowes statements after Misano race1: “I was a lot worse than I expected. In the practices I thought, ‘I feel good,’. I set lots of good laps and changed the bike a little bit on the front. In the race I didn’t have the feel I needed and from the first laps I was struggling with releasing the brake and carrying some corner speed. The front was moving a lot. I had a couple of warnings so I did not have the confidence to push like I expected. It was a shame because I hoped to be a bit faster but this was my first time racing here on the Kawasaki and obviously the temperatures came up for the race too.” 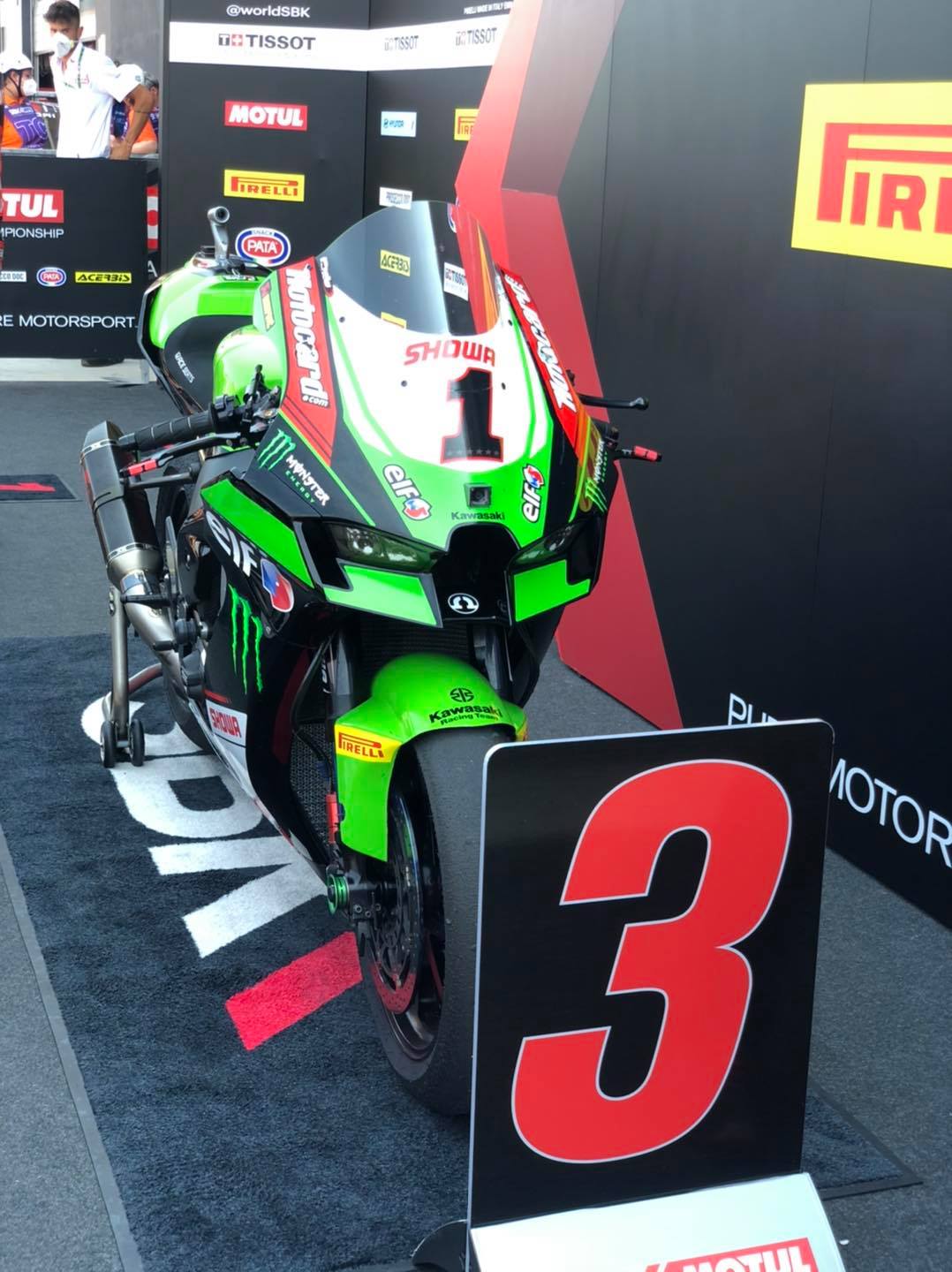 Jonathan Rea statements after Misano race1: “Saving a possible crash was more lucky than anything. I chose the new front tyre for this race. I used it in Superpole and felt quite good but we did not have a lot of information after ten laps in all. It seems like the temperature, especially in the race, meant I cooked the tyre too much. It started moving quite a lot. When I rejoined the track and had a gap up to Toprak it felt better, not perfect, but better. We need to revisit things to see if we can be fast with our ‘normal’ front tyre. The new one brought some confidence on the brakes but we need to be able to fight at the end of the race. My pace was still OK for the last laps but the moment I had in Turn One disturbed my rhythm and let Michael get away. He did fantastic today and the pace at the front was really good. I think we can make a small step with the bike because I learned a lot from Michael and Toprak in Race One.” 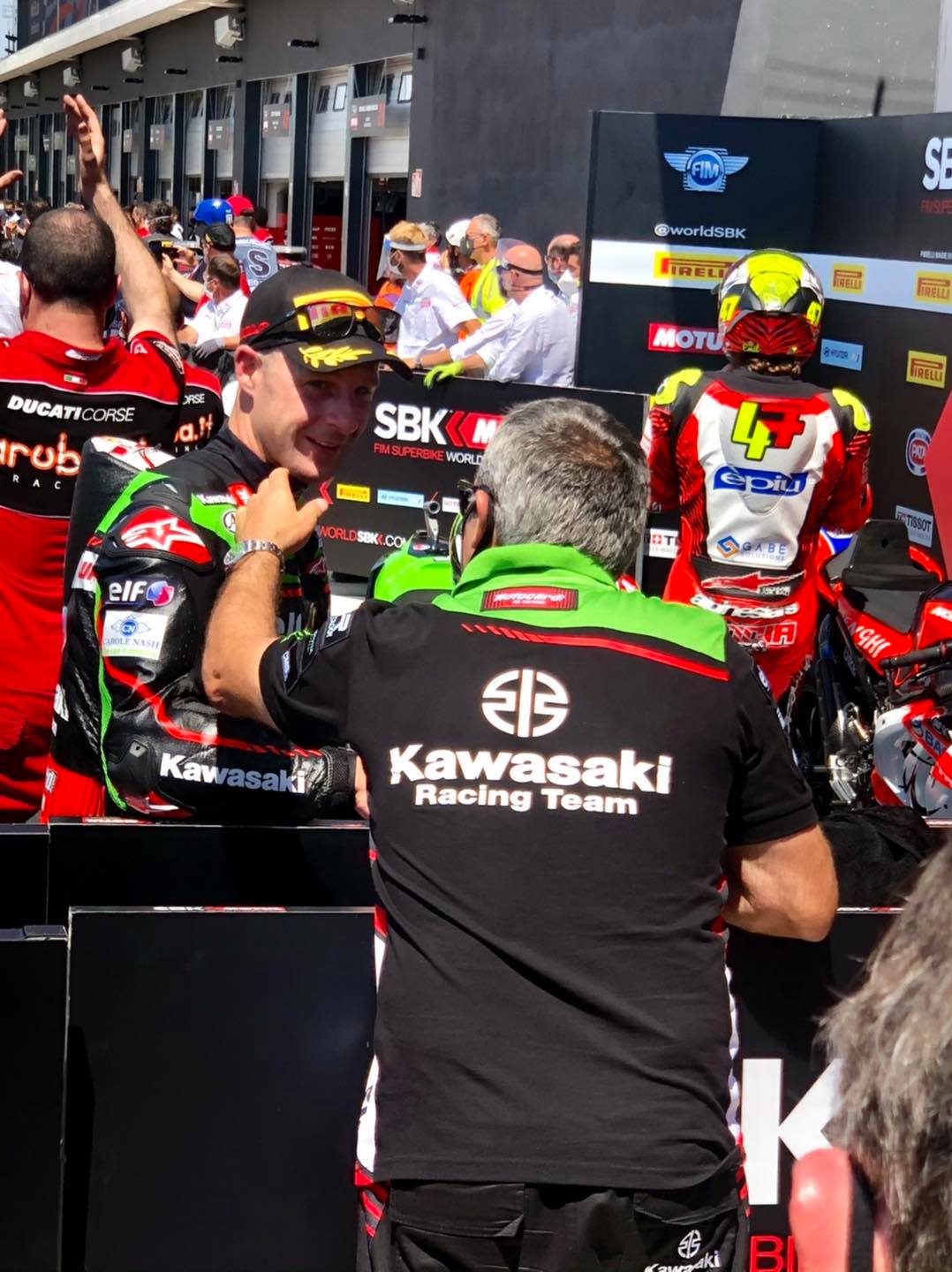 In the Misano Superpole race, Jonathan Rea finished in P3. He secured another third place result in Race 2 to maintain his leading position in the championship. Alex Lowes took his KRT Ninja ZX-10RR to fifth in the Superpole and then sixth in Race 2, as he remains in fourth place overall. 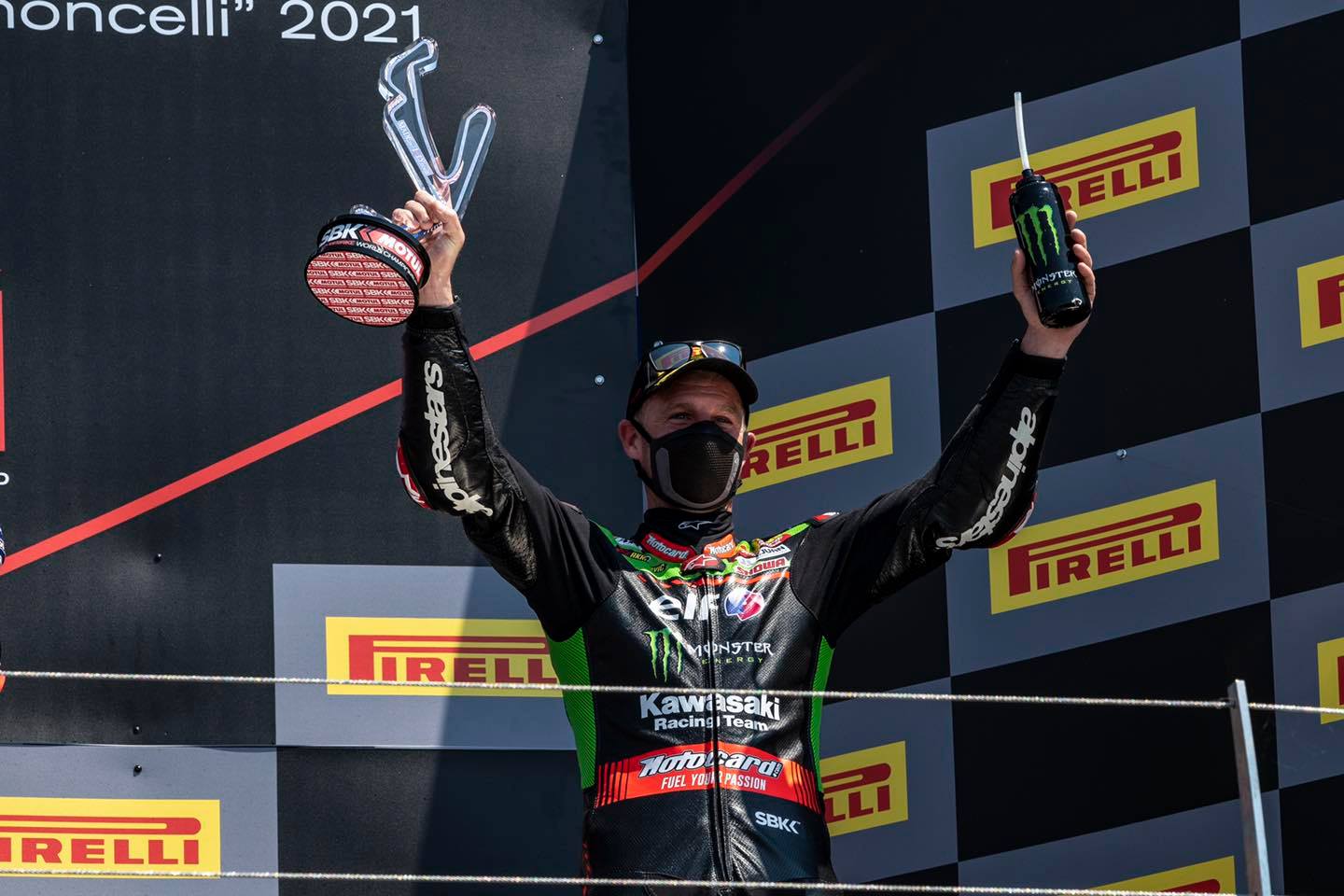 Jonathan Rea statements after Misano Race 2: “In the second race I went with the ‘C’ rear tyre, the harder option, that I used in Estoril. With the temperature going up on the shoulder of the tyre I was missing a little bit of stability. Then from there I sacrificed a little bit of edge grip. I knew in the beginning I was maybe going to also sacrifice a little bit of turning but as the race went on I felt like I could still keep my brake performance, which I could. I could be in there and fighting to be there, but Toprak had a great rhythm. I was there or thereabouts, fighting like hell. I can’t even remember the short race! I was there at the front for three or four laps but after the warning of a front end slide yesterday I just had to accept my position. Congratulations to Toprak and Michael they had awesome races. I went all-in in Race Two and had some warning but was able to back-it off a little bit and consolidate a podium.” 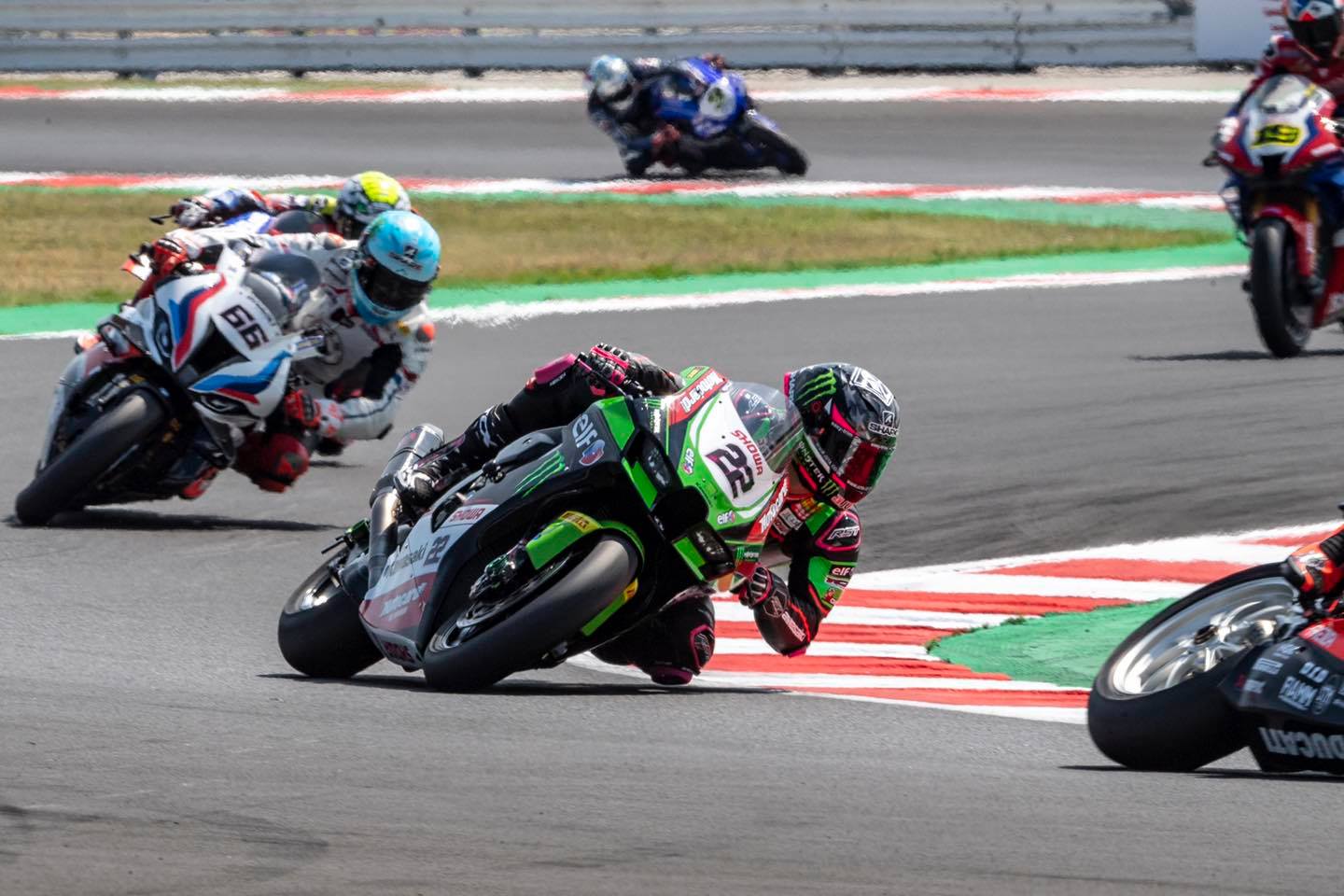 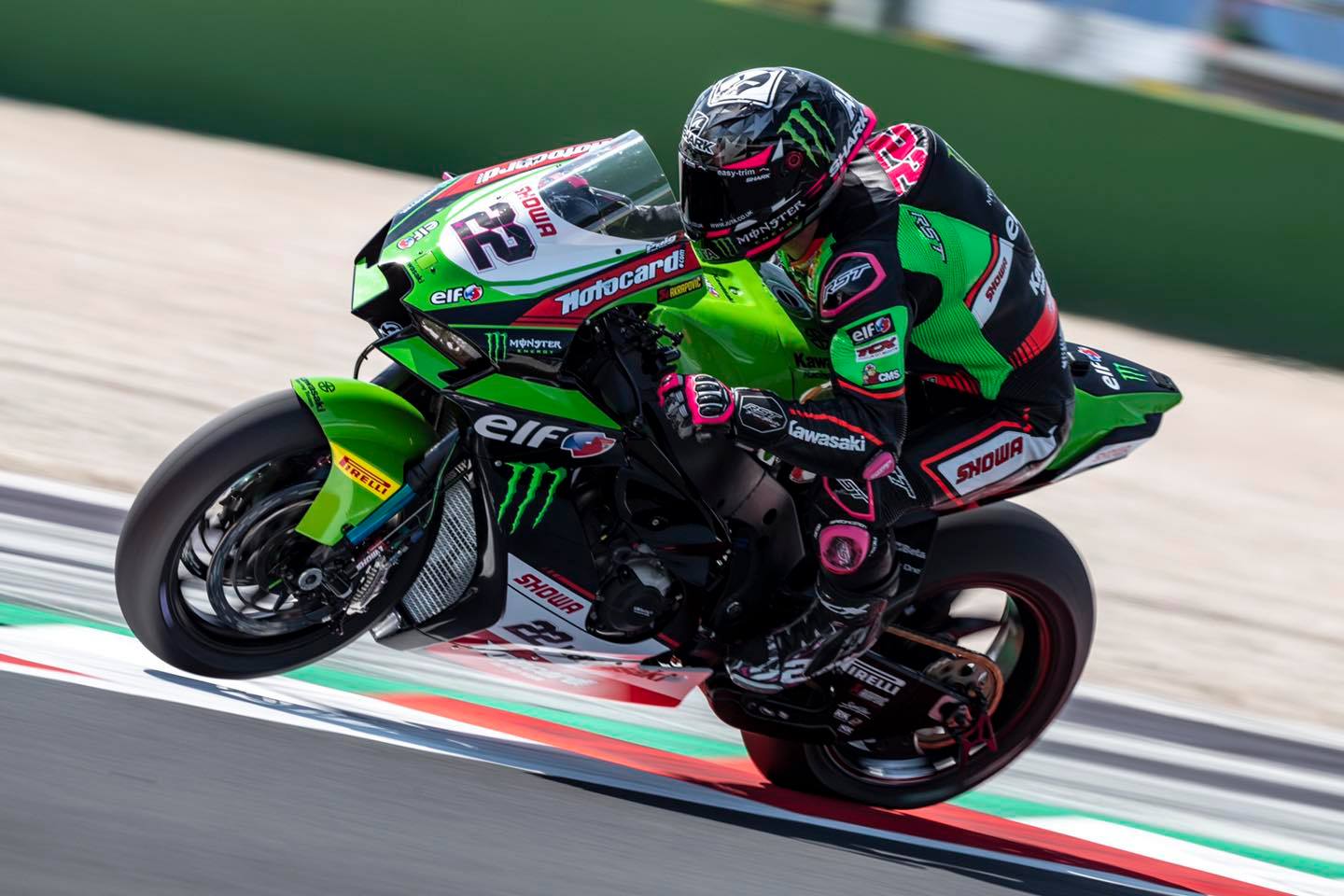 Alex Lowes statements after Misano Race2: “This weekend we struggled in the hotter conditions to really find the feeling we wanted. In the Superpole Race I felt a little bit better so we made a change for the second race, with the balance of the bike a bit more forward. I thought that after this morning’s experience that was going to be better. But it looks like when the track temperature arrived above 50°C I was really struggling to carry corner speed after maybe six or seven laps. It was a shame because after 12 or 13 laps I could see Garrett Gerloff catching me and I had no chance to battle with him. Misano, in these hot sunny conditions, is a special place. I feel a lot better prepared now for other tracks if we have hot temperatures, as we have more experience on the Kawasaki.” 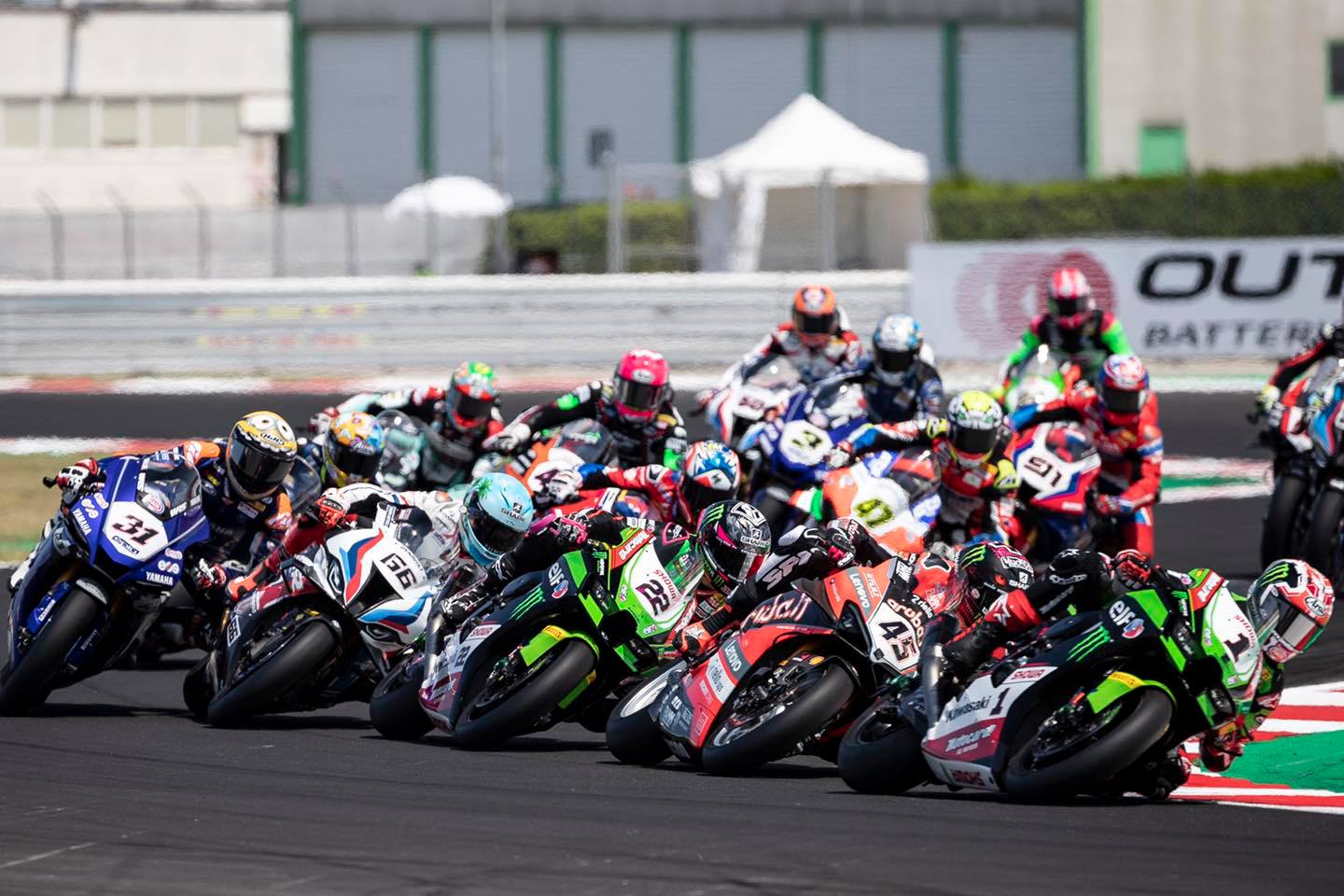 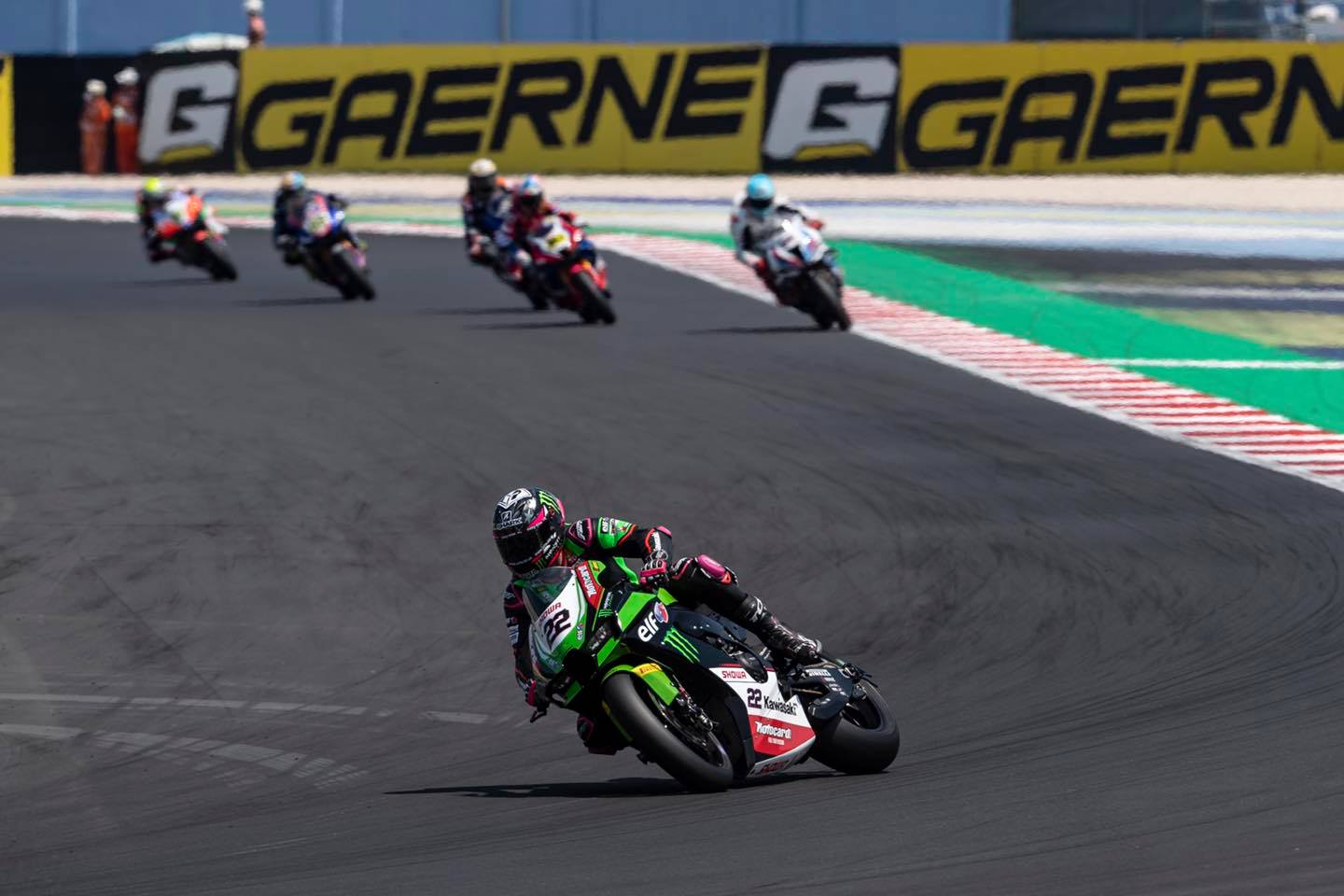