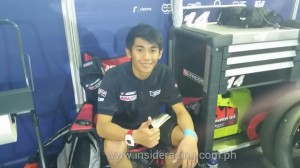 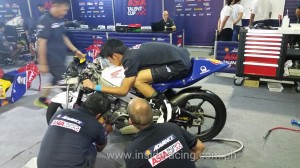 Sepang, Malaysia- Filipino Ralph Kenneth Torres has made adjustments to his HondaNSF250R racebike ahead of today’s final race of the 2014 Shell Advance Asia  Talent Cup here at Sepang International Circuit. Torres finished a lowly 20th position in yesterday’s race due to susension issues. ” We changed the settings onboth front and rar suspension yesterday just beforeth race. I did not have time to test it and in the race it was worse than during my qualifying. So for Race 2 we are going back to our qualifying setup,” said the rider from Caloocan City. Yesterday’s exciting race was won by Malaysian Shafiq Rasol on after a race long battle with the three leaig Japanese riders.He tookthe lead in the last corner of the last lap to cheers of th local fans. Toba leads the championship heading into the final race with 139 pts while countrymen Date and Sasaki in second and third with 137pts and 111 pts. Sasaki could have been led the championship had he not crashed in Race 1. Meanwhile, Torres lies in 20th place with 7 points.