Torres wins and Lopez is the new 2014 MotoIR Champion! 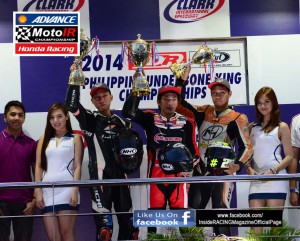 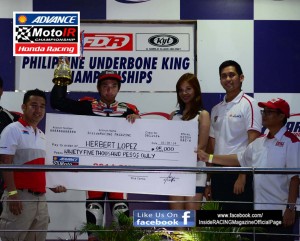 Herbert Lopez of Sum Racing wraps up an impressive racing season by clinching the title in the 2014 Shell Advance MotoIR Championship Presented by Honda. The overall Vice Champion of the thrilling series is 2012 and 2013 champion Rizaldy Canare of NHK-Racewell and the 2nd Runner-up is Honda-MTRT’s Paul Mark Doblada.

The final race held on October 5 at the west course of the Clark International Speedway has been a 4-way battle between polesitter Doblada , Canare, Lopez and another Sum Racing rider Ralph Kenneth Torres who is also the Shell Advance Asia Talent Cup Philippine representative for 2013. 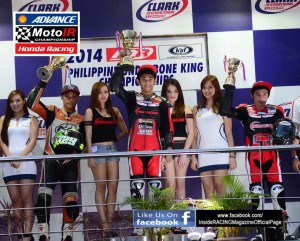 In the end of the 11-lap race, it was Torres who took the checkered flag followed closely by Doblada, Lopez and Canare. NHK-Racewell’s Vrei-ar Suba finished fourth. Despite his third place finish Lopez was declared as the champion after 9 rounds wherein he won four legs. 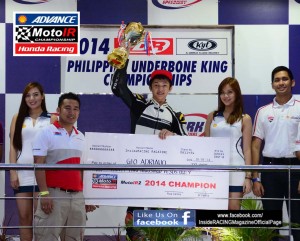 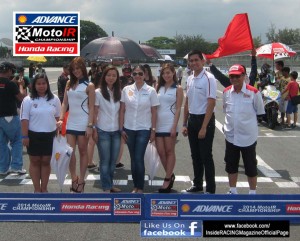 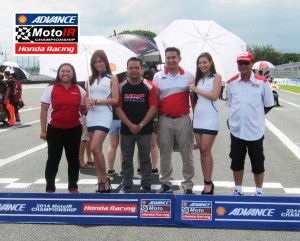 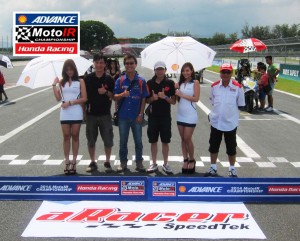 The 9-race 2014 Shell Advance MotoIR Championship Presented by Honda is also supported by Racing Boy, FDR, Bridgestone ,Vee Rubber and aRacer.Now on its third season, the championship is organized by InsideRACING and sanctioned by the Unified Sports and Racing Association (USRA) for Motorcycles, Inc. The final race will be on Oct 5 at the Clark International Speedway.