InsideRACING Update: Yamaha Motor Philippines, Inc. (YMPH) has gone all over the country to find the most skilled and passionate racers. The climax of the annual Yamaha Grand Prix has ushered in a new breed of racers ready to show the Philippines that they have what it takes to carry the flag on the international racing scene. 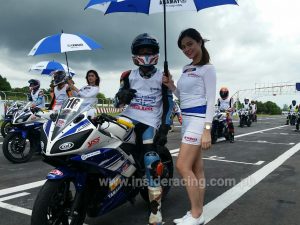 Racing through Sta. Rosa, Laguna; Malaybalay, Bukidnon; Naga,Cebu; and Baliwag, Bulacan to find the purest of local talent, they were gathered at the Carmona Race Track on September 27 for their shot at glory. For some of the racers, this was a return trip, another tour of duty for the country. Others looked to redeem themselves, a second shot at being part of the prestigious lineup that will be sent to an international race event. The rest, were the newcomers – riders that have yet to see their skills truly tested and are aching to prove they belong to the most elite in the Philippine racing arena and beyond.

Entertainment off the track was also in full swing with Arci Muñoz gracing the event and hip-hop prodigy Abra putting on another spectacular performance for the audience. The event was also the stage to launch the YZF-R3, right where it started, on the racetrack. Yamaha Riding Academy Executive Instructor Yoshiaki Kato rode the YZF-R3 with Arci Muñoz in the racetrack. 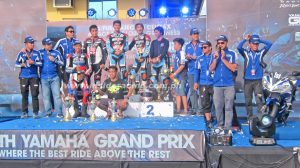 The Yamaha Grand Prix may have reached its epic conclusion but it is the start of bigger things to come. The YZF-R3 will now be part of the Philippine racing culture. New kinds of racers will emerge, old champions revitalized. The next generation of Philippine riders have been revealed.

More pictures and details to be published in InsideRACING Magazine.