Stoner on Top for Ducati as Rain Stops Day 1 Short 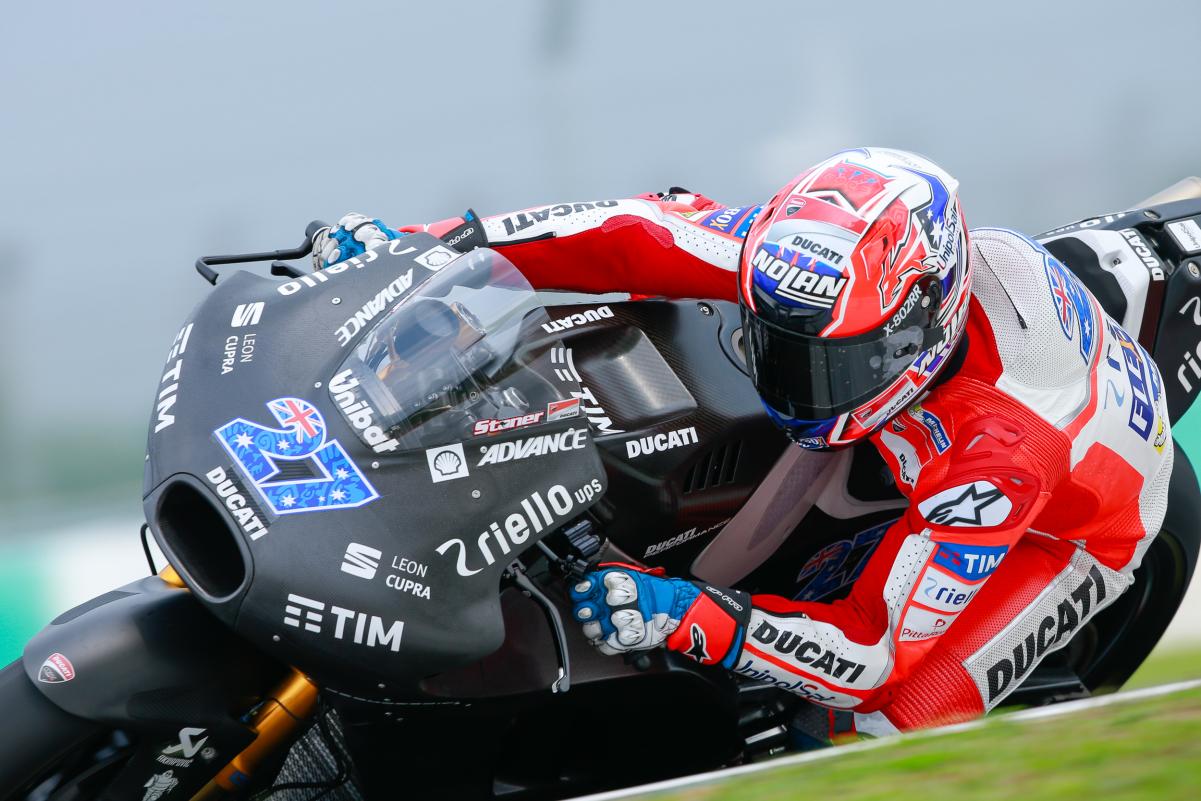 Ducati Team test rider and double MotoGP™ World Champion Casey Stoner led the way at the top of the timesheets on the first day of the first Official Test of 2017 – ahead of Ducati race rider and 2016 Malaysian GP winner Andrea Dovizioso as the Italian factory locked out the top. Behind the two red machines was Maverick Viñales in P3, showing his teeth once again after topping timesheets first time out on his new Movistar Yamaha machine in Valencia. Rain cut the day short as it began around two hours before the end of the session, putting paid to any attempt to better times.

Stoner put in 32 laps with a best of 1:59.680, ‘DesmoDovi’ 29 laps with a best of 1:59.797. The two men were the only riders below the two-minute barrier. New arrival in red Jorge Lorenzo was further down the order in P17; a 2:01.349 on a 2016 machine, before rain put paid to any further advances. One of the Ducati Team’s most high-profile additions in Malaysia is a strikingly-new exhaust, something that proved a key focus in the initial stages of testing for the factory as the red machines were put through their paces.

Viñales’ 2:00.129 in P3 was his best over 54 laps on his first track day of 2017, with teammate Valentino Rossi on a 2:00.694 to go P8 – a second down on Stoner after 27 laps – with new additions left off the agenda for the first day back on track for Movistar Yamaha MotoGP. Both Rossi and Viñales also tested at Sepang late in 2016 in a private test shared with Monster Yamaha Tech 3 rookies Jonas Folger and Johann Zarco. Fastest rookie on Day 1 was Folger in an impressive P7, who was up the timesheets from the off. The German’s best of the day was a 2:00.643 after 40 laps, with his French teammate putting in a best of 2:01.224 over 69 laps. Both premier class newcomers got in some wet track time late in the afternoon.

Alvaro Bautista (Pull&Bear Aspar Team) was the early leader as the day began and finished up the session in a notable P4 as he moves to the team to pilot a Ducati for the first time, with new teammate Karel Abraham further down the timesheets as he returns to MotoGP™ from a year in WorldSBK. Bautista also got in some running in the wet later in the session, and ended the day after 53 laps with a best of 2:00.134.

Team Suzuki Ecstar’s charge was led by Andrea Iannone on day 1 as the Italian put his new MotoGP™ machine up into the top five. The ‘Maniac’ put in 44 laps, with an impressive best of 2:00.489. Rookie teammate Alex Rins, who is getting back to full strength following a crash in testing in Valencia, was down in P20 with a 2:01.890, but showed a clear progression – and ventured out even after the rain started.

LCR Honda Team’s Cal Crutchlow was the quickest Honda as he finished day 1 in P6, with a 2:00.569 his best time after 44 laps. Repsol Honda Team got 2017 in gear in P9 and P13, with reigning MotoGP™ World Champion Marc Marquez leading teammate Dani Pedrosa by two tenths. Marquez did 56 laps with a best of 2:00.738, Pedrosa 44 laps with a top time of 2:00.970. EG0,0 Marc VDS Honda duo Jack Miller and Tito Rabat had a slightly tougher day at the office, with the Assen 2016 winner on a 2:01.943 and the former Moto2™ World Champion a further four tenths back. Honda were another manufacturer with a new exhaust as one of their key points of investigation for the test, and both Marquez and Pedrosa also took to the track in the rain.

Aleix Espargaro led the Aprilia charge for Aprilia Racing Team Gresini in P15 with a 2:01.272, with the Noale machines sporting a new fairing. Rookie teammate Sam Lowes did a best of 2:02.943, but did get a significant amount of track time – 50 laps – something important after the Brit sat out some previous sessions in Valencia and Jerez following some big crashes. Espargaro completed 36 laps.

Red Bull KTM Factory Racing duo Pol Espargaro and Bradley Smith got back to work on their 2017 project as full factory riders for the first time, with Espargaro putting in a 2:01.338 and Smith a 2:03.033. The younger of the two Espargaro brothers also ventured out in the rain in the final part of the session as KTM prepare to go racing full time in the premier class, eager to test out the bike – which sports some key differences to its competitors such as the tubular steel chassis – in different conditions.